– All customers get 30% discount tickets for all tiers –

This upcoming singer who took the music industry by storm with her single “Jars Of Hearts” and now with the anthemic theme from the Twilight saga movie Breaking Dawn, “A Thousand Years” will be performing live in Malaysia on Thursday, 7 June at Kuala Lumpur LIVE at 8.30 pm.

“We are truly excited in bringing world – acclaimed events such as this in the entertainment space to our customers, we will also be rewarding our customers, through a 30% discount on all ticket tiers. All one has to do is just flash their Celcom mobile phone at participating Ticket Pro outlets to enjoy the discount up to 4 tickets. 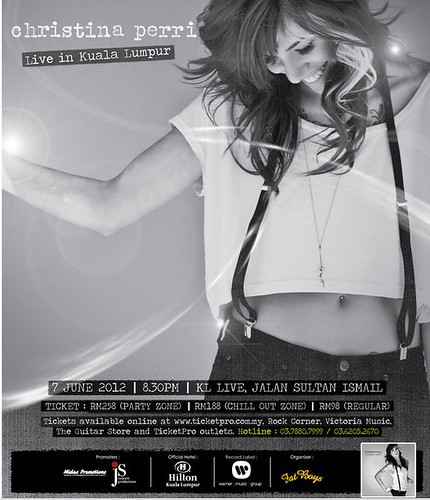 Additionally, customers can also have a chance to win FREE Christina Perry tickets from 25 – 31 May 2012. All they have to do is to register by sending PERRI to 28881 and then reloading RM30 worth of airtime to be in the running. Meanwhile new customers who sign up to any Celcom postpaid plans, they could be in running to get free tickets too.” said Zalman Aefendy Zainal Abidin, Chief Marketing Officer of Celcom Axiata Berhad.

Moreover, to ensure fans and customers get the fullest out of Christina Perri’s concert, customers simply need to download any Christina Perri Call-Me-Tones, full song or true tones via The Cube, an amazing multimedia branded channel by Celcom, to win Christina Perri concert tickets.

Customers can also dial *888*99# to find out how to win other money-can’t- buy experiences. The Cube enables customers to download local and international digital mobile content anywhere, anytime. Look out for endless entertainment through The Cube by logging onto www.thecube.my or m.thecube.my from mobile or dial *888# for more details.
 
Besides that, customers can also win VIP passes and Christina Perri’s merchandise by participating in other Celcom activities which includes:

• Cube Radio – Subscribe and get access to Cube Radio Jukebox by dialing *1188 and select Top 20 English category. Listen to Christina Perri’s songs and stand a chance to win her CD. Charges of RM1/week for subscription and 10sen/min during streaming applies

Whatchuwant Campaign
Other than concert tickets or VIP passes, Celcom customers can also enjoy great deals on packs and fabulous prizes from Whatchuwant campaign that was recently launched. Customers get to enjoy exclusive great deals and savings by subscribing to any 6 packs; Text pack, Fun Pack, Surf pack, Video pack and MMS pack plus earn a chance to get prizes from 30 April until 5 August 2012. To subscribe to a pack and to select a prize of the week, customers simply need to dial *128# from their mobile phones to access the Whatchuwant menu. This campaign is open to all Celcom postpaid and prepaid customers excluding Celcom Biz customers. Whatchuwaitingfor? Check out www.xpax.com.my for more info!

About Christina Perri
Christina Perri has come a long way as in July 2010, the then struggling singer-songwriter and musician had a life-changing moment when she was asked to perform a song she had written, a defiant break-up anthem called “Jar of Hearts,” on the Fox show “So You Think You Can Dance”. The raw, emotional quality of her performance connected with viewers and catapulted the 24-year-old Philadelphia native into the public eye. “Jar of Hearts” went on to sell a million downloads and land Perri, who was then supporting herself as a café manager in Beverly Hills, a deal with Atlantic Records.

Jar of Hearts” is just one of 12 honest gems that Perri unveils on her debut album lovestrong, a title she says reflects how her heart feels today. “I looked at the album as a whole piece and the two themes that stood out were love and strength,” she says. “It really titled itself. Writing about love is just who I am. I’ve tried to write about other things, but ultimately this is what comes out of me.”

Perri lays herself bare on lovestrong, using her soaring, bittersweet voice and expressive piano playing to sketch out her stories. Some, like “Penguin” and “Arms,” are happy and hopeful, some, like “Bang Bang Bang” and “Mine,” are fun and playful, and others, like “The Lonely” and “Jar of Hearts,” are downright wrenching. The common thread? “They’re all songs I felt I needed to give away,” she says. “I have been writing songs since I was 15, so I reached into my arsenal and picked the ones I felt others should hear. My intention for my music is pretty simple: I want to make people feel less broken and alone.”
It didn’t really register how emotionally raw the album was going to be until Perri’s 20th day in the recording studio. “In the vocal booth, I had to go back to the place and time that made me feel so vulnerable and rip open old wounds to sing each song, sometimes two songs in a day,” she says. “Emotionally, it was the hardest 33 days of my life, but it was worth it because the result is that this album is 100 percent me. It’s heartfelt, real, bold, honest, vulnerable, hopeful, strong, poetic, bluesy, gritty, pretty, and simple.”

Produced by Joe Chiccareli (White Stripes, Tori Amos) and mixed by Michael Brauer (Coldplay, Regina Spektor), lovestrong boasts a bold creative vision that is very much in keeping with Perri’s spirited personality. A petite, tattooed ball of energy with an engaging smile, she has always embraced life to the fullest. Her adventures have included touring the world as an assistant to a rock band, spending a year at a prestigious university, producing popular music videos, making olive oil in Italy, and even serving as a fashionistabarrista in Beverly Hills.