THIS IS NOT AN ADVERTISEMENT YAAAAW!

Ever liked someone without a clue on how to approach them? Ever get tongue-tied when talking to the person you like? If your answer is in the affirmative to these questions, we have just the movie for you.

Despite sounding like a cheesy advertisement on speed-dating, this is in fact about ‘Ngorat’, the movie that is scheduled to meet cinema-goers this July 2012.

On the verge of another failed attempt at finding a girlfriend, a dejected and hopeless Ijam stumbles across a love guru played by Malaysia’s heartthrob Aaron Aziz, who guarantees his tips can help Ijam find his dream girl in 30 days.

But when the love guru’s tips does not seem to work and he is about to lose his best friend Kira, he must learn to find the strength and wisdom to decide whether he should continue listening to the love guru or lose his true love forever.

‘Ngorat’ brings back one of Malaysia’s finest actress Erra Fazira onto the big screen, playing the main role as Kira, best friend to Ijam, played by Iedil Putra, who you’ve probably heard of from his role in Projek Pop, the local hit series currently showing on 8TV.

Also starring, the current reigning king of film and drama, Aaron Aziz as Arjuna Kasih, a character far different from anything he has played in his career as an actor.

“We wanted to create a role that, like so many guys out there, faces the common problem of trying to win the heart of the person they adore,” explained Tengku Iesta Tengku Alaudin, General Manager of Grand Brilliance when asked on his choice of having this movie up for the big screens. “It will also be nice to see a movie that is as relatable as it is funny, for a change,” he added.

Shot mainly in Kuala Lumpur, ‘Ngorat’ is expected to add a little colour to the industry with its refreshing style of comedy.

The movie is also perfect for everyone due to the U classification that it has received. So mark your calendars, pay attention to the tips and you might just end up with that special someone after all! 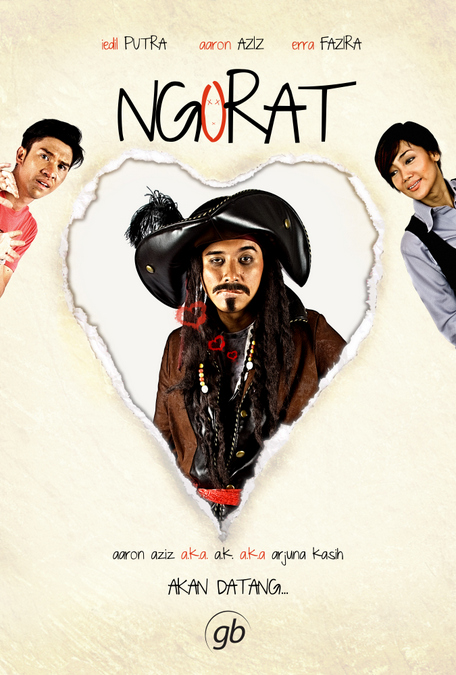