It was hot, it was exciting and it was definitely out of control! The nations’ most eminent dance reality show, SHOWDOWN 2011 reached feverish pitch as the TOP 4 hip-hop crews from around the country battle it out in the FINAL SHOWDOWN ! From the hundreds of aspiring dance crews that swarmed in for auditions, rounds of eliminations, auditions, battles, the MELTDOWN phase and LIVE shows – we now have the spot light shining bright on the SHOWDOWN 2011 CHAMPIONS – ELECOLDXHOT.

Throughout the SHOWDOWN 2011 journey, Malaysia has witnessed young dance crews drop the coolest street grooves, morphing from amateurs to mavens! From the countless floor rocks, freezes, power moves and hand glides that we witnessed week in and week out, SHOWDOWN 2011 has finally found its conqueror! ELECOLDXHOT was titled SHOWDOWN 2011 Champions and took home the grand prize of RM50, 000 cash after a nationwide vote was tabulated! 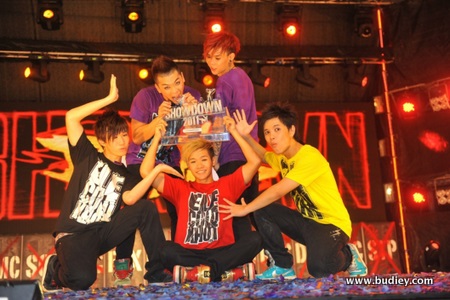 The FINAL SHOWDOWN took place at the official venue I-City, Shah Alam, on Wednesday, 6th July 2011 at 9.30pm and saw the TOP 4 crews show off their moves in front of a LIVE audience leaving their fate entirely in the hands of the public. The FINAL SHOWDOWN witnessed Rokusteps leave the competition after the first set of performances, after they had the least amount of public votes. The spotlight was then on the TOP 3 crews – Bounce Stepperz, Elecoldxhot and HMC Phlow who left the audience in awe with their second set of performances. However, the only street traditional crew, Bounce Stepperz received the lowest number of votes in this round leaving ELECOLDXHOT and HMC PHLOW to scuffle it out in one of the most heated SHOWDOWN BATTLE’s. At this point, the voting systems were reset and a new set of votes were accumulated to determine the SHOWDOWN 2011 Champions.

While the temperature was at its highest, the crowd was cheering and the hearts of the contestant pumping as Joe Flizzow exclaimed “You know what, if last year we had two of the best Bboy crews in the country battling, this year we truly have two of the best street dance crews on stage. That battle displayed everything about street dance, from popping to locking to bboying, everything was there and I didn’t want it to end. So to the winner of SHOWDOWN 2011, all the best but both crews really really killed it.” While Maple Loo said “You guys got the house down. I don’t know what else to say. This is the most exciting battle I’ve seen, and you guys understand the heart and trust of this competition. You brought on your artistic direction, quality moves and your wow factor. That’s all. You brought in the wow factor.”

The FINAL SHOWDOWN was hosted by Fly.FM’s reputed deejay Hafiz Hatim and showcase a star studded judging panel made up of award-winning rapper/album producer Joe Flizzow of Too Phat and renowned dancer/choreographer Maple Loo.

“The FINAL SHOWDOWN saw Malaysia choose our nation’s best dance crew. We hope ELECOLDXHOT will now inspire others to step out of the darkness and embrace their dance talents as well” said Mr. Ahmad Izham Omar, Chief Operating Officer of TV Networks MPB. Izham adds “To the sponsors, Hotlink, partners Sony and Vitagen,we thank you. Thank you to the judges, who have done a fantastic job in moulding the crews bringing out the best in them. SHOWDOWN as we know it is a reality dance programme that is designed to shed light on the street dance culture in the most positive approach and I believe that SHOWDOWN 2011 has lived up to its objective.”

This year we’ve taken online interactivity and content to another level. SHOWDOWN 2011 fans can access vast content and information plus go social on SHOWDOWN 2011’s microsite via http://www.8tv.com.my/showdown. What’s new and great about the site this year? Not only will you get to know your favourite Top 12 Dance Crew better, viewers will have access to video dance tips by experts (from the likes of Byron Carter and B-Boy Chino from Thailand), LIKE your favourite Dance Crew Facebook pages, an extensive Video Gallery (Not Seen on TV, 2010 recaps, full episodes and diaries) and Photo Gallery (Auditions, Meltdowns & Episodic) and loads more. The most exciting content will be the introduction of an interactive Online Contest called “The Flippin’ Tournament”. Fans stand a chance to win attractive weekly prizes and battle it out for the ultimate Grand Prize!

Catch your favourite 8TV programmes by simply logging onto www.8tv.com.my. What’s even more exciting is that 8TV has now gone global! Those who are staying abroad are able to watch the weekly episodes of SHOWDOWN 2011, online via www.tonton.com.my. In Malaysia, you can now also watch SHOWDOWN 2011 on mobile via m.tonton.com.my. Don’t forget to follow us on www.facebook.com/8TVshowdown for web exclusives and interact with other fans of the show. 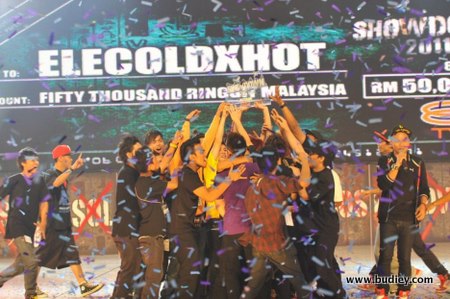 ML : Wow HMC Phlow. Macam konsert HMC Phlow la hari ini. You know what, that was such a different experience. You really thought out of the box – Literally, using beat box. I think that was a very intelligent idea. And memang tidak boleh dinafikan la, you have got such undisputed talent. Even when you cover your faces, I would still recognize that it’s you, because of the way you move. Great job guys

JF : You know what HMC Phlow, that was an awesome performance, and I think everybody on facebook, they agree with me. You know, you guys are one of my favourite crews from last season and I’m glad you guys came back here so determined to win SHOWDOWN – You guys got my absolute respect. That was some crazy locking and it was an approach yang risikonya sangat tinggi. I think you guys pulled it off really well.

ML : Ok first, I must admit, I guess I must confess, you know remember joe when we first saw them at the Meltdown, at the auditions, I mean you guys were good in our eyes at that level. You were not that striking to me, at first. But look at you now, you have developed skills and the sense of creativity and stage craft and the sense of conceptualizing your show. That is why I say there is something very special about you. But tonights show I would have wished that the focus and the emphasis were more on you guys, rather than the fire eaters. You know what I mean? I would have preferred if the focus was you. But I guess overall I understand what you are trying to do. I get it, I just didn’t like some parts of it – maybe just the intro.

JF : Waddup bboys! Unlike maple, I liked the intro. Because munch move is one of my favourite bboy moves and you guys killed the munch moves just now. You guys are the only bboys crew left in this competition. And I think that set just now really represented your art form. Some nice uprocks and over all it was a very entertaining show.

ML : How do you know that I am a fan of Bollywood? Bounce Stepperz memang serba boleh. Memang kelas gitu and memang jadi la. Kelas!

JF : Yo watssup Bounce Stepperz, I liked that show you know. Saya rasa memang langkah yang bijak you know, to mix traditional with your set, because that’s what you guys are best at and I think today you guys showed to Malaysia why you guys are in the finals. You guys totally deserve to be here, for sure.

ELECOLDXHOT (ECX)
Song : In For the Kill by La Roux (Skrillex Remix)

ML : U know ECX you never fail to disappoint me. You guys are pure artiste. You really are and you are like a thunder storm you know, you always surprise us. Like a thunderstorm – you are dangerous, you are unpredictable and you make so much noise. Give it up!

JF : Yo ECX maemang gempak la kan. Im such big fan of you guys because the way you guys take a track dissect every single sound and translate that sound into movement on stage is just incredible man. I can’t wait to see the next show. Make some noise for ECX.

ML : Memang a surprise la kan. I tak sangka you guys are going to come up with shuffling. Memang kacang tak lupak kulit ye. You went back to your roots. I think that was the most stylish shuffling I’ve ever seen. You guys bukan katak la, you guys became chamelions. So SHOWDOWN really brought the Chamelion out of you, not the katak. As usual you showcase is always visually exciting. And you are visually very arresting. Cantik!

JF : HMC Phlow memang terbaik la show tadi. You know what, I love the fact that you guys raised the level of difficulty for this set right here. When I saw your first set tadi I was like “ hmmm..mungkin dia orang simpan” and betul-betul kamu orang simpan. That’s what’s up..that’s what’s up..yeaah!

ML : You know that performance was very powerful. And you know why it was powerful, because it’s your confidence. I can really see it in your faces your level of confidence is up the roof. You’ve become such confident performers. And I am really glad for that, really glad.

JF : Dulu saya cakap, bila boleh tengok pendekar buat backflip kan, hari inin you guys semua jadi pendekar ah. I think you guys showcased your versatility right there. Not only were you guys dancing, you guys went into some silat and bila saya tengok, its really cool to see the girls doing silat and all and then run back into the lembut tarian melayu. I really loved the set.

ML : We think you are sick guys. You are sick guys! That was sick. It was incredible, that was phenomenal! To even think of doing something that crazy. You know. I mean its crazy coordination, crazy ideas, crazy execution and you were all on point. That’s the craziest part. I am so overwhelmed, you guys move mountains, that’s all I can say – you move mountains!

JF : Make some noise for ECX. That was amazing. I like the choice of song. I like everything from the intro. And when you said you want to do something no one has ever seen, that was it right there. Because I’ve never seen any dance group move to the lyrics of Busta Rhymes the way you guys just did. You guys are international choppers like Busta Rhymes man…that’s what’s up!

ML : You guys got the house down. I don’t know what else to say. This is the most exciting battle I’ve seen, and you guys understand the heart and trust of this competition. You brought on your artistic direction, quality moves and your wow factor. That’s all. You brought in the wow factor.

JF : You know what, if last year we had two of the best Bboy crews in the country battling, this year we truly have two of the best street dance crews on stage. That battle displayed everything about street dance, from popping to locking to bboying, everything was there and I didn’t want it to end. So to the winner of SHOWDOWN 2011, all the best but both crews really really killed it.