Food glorious food is what’s making its way to 8TV as the cheeky and fervent Brit Chef Jamie Oliver takes on the high statistics of obesity, heart disease and diabetes. With the majority of kids tipping the scales and classifying pies as one of the major food groups, its time to thank God, our waist lines and heart valves that Jamie Oliver is around!

Jamie’s Food Revolution follows the TV chef personality and campaigner for healthy food, as he travels to America to raise awareness of the growing obesity crisis and aims to get people cooking and eating good food again. By talking and educating people, Jamie attempts to show individuals the incredible rewards that come with cooking for themselves and the people they love. 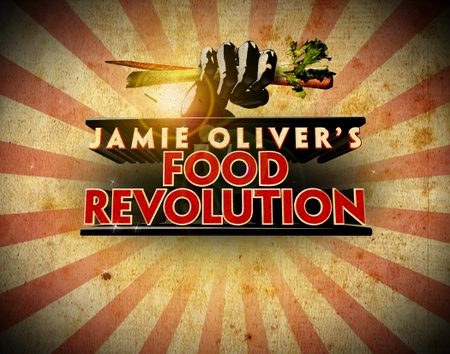 After noticing the diet struggle in the US and how kids were growing up overweight and malnourished from a regimen of processed foods, Jamie goes straight to the heart of the problem and looks at the challenges facing people in their homes, workplaces, schools and supermarkets. Jamie’s mission is to begin a chain reaction of constructive change across the country. After studies revealed that the children of this day and age are the first generation to live shorter lives than their parents, Jamie heads down to Huntington, West Virginia, the town once labelled the fattest in the United States to make it clear that it is time for change – it is time for a Food Revolution!

He says: “The time is right for people to rediscover the sense of pride, satisfaction and fun you can get from cooking for the people you love. There’s an incredible community in Huntington, and I want this experience to be a celebration of what we can achieve when people come together. I want to prove that turning around the epidemic of obesity and bad health doesn’t have to be boring or dull in the slightest. Wonderful stories will unfold in Huntington, and hopefully this will inspire the rest of the United States.”

“My favourite chef is now on 8TV. Jamie Oliver wants to start a food revolution to get people cooking fresh food again in Jamie Oliver’s Food Revolution .As far as I’m concerned he can do no wrong. It’s really overwhelming to see the number of people who have come out to support the Food Revolution. It’s going to be a mouthwatering, exciting and healthy month. ”said Ms. Airin Zainul, Group General Manager of 8TV & ntv7.

The Food Revolution campaign has made an impact in the US with over 600,000 signatures on the official petition and attracted support from celebrities including Jennifer Aniston, Ricky Gervais, Queen Raina and Oprah Winfrey.

Catch the messy cooking skills, quirky abbreviation of the word “brilliant” and deliciously easy to do recipes as Chef Jamie Oliver shows us that healthy cooking does not have to be a boring chore, in Jamie Oliver’s Food Revolution beginning, Thursday, 26th April 2012 at 10.30pm exclusively on 8TV. ¬8TV is also on Astro’s Channel 708. You can catch your favourite shows as Catch Up on www.8tv.com.my / www.tonton.com.my or follow us via www.facebook.com/8TVfb , www.twitter.com/8tv and www.youtube.com/8tvaddicts 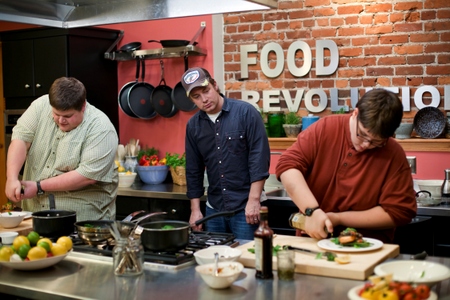