TOP ELEVEN CREWS STEP IT UP!!

WHO WILL BE ELIMINATED THIS WEEK?

SHOWDOWN 2011 has now gone LIVE! The countless turns, jumps, isolation of body parts, flips, stands and crazy spins are just a modest account of what we’ve seen on SHOWDOWN 2011, as the crews battle it out towards earning themselves the SHOWDOWN 2011 Championship title and the grand prize of a massive RM50,000 cash!

From the hundreds of aspiring dance crews that swarmed in for auditions, rounds of eliminations, auditions, battles, the MELTDOWN phase and the first LIVE show – we now have the spot light on the top 11. 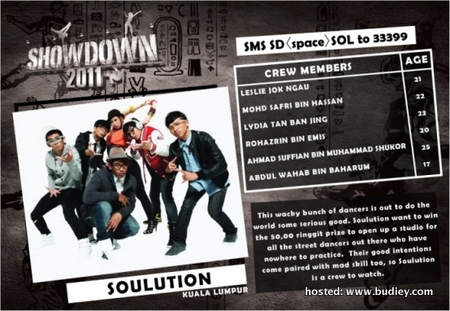 The SHOWDOWN 2011 LIVE show takes place at the official venue I-City, Shah Alam, every Wednesday at 9.30pm. This week catch the Top 11 crews drop the hippest moves to the 80’s theme as they show off their coolest skill in front of a LIVE audience, leaving it up to the Malaysian public to determine the bottom 4 crews via SMS voting. The four crews with the least amount of votes will have to BATTLE it out for the judges before they decide which crew gets eliminated. To vote for your favourite crew type SD CREW CODE and send it to 33399. For 5 or 10 votes type SD5 or SD 10 CREW CODE and send it to 33399. It would then be up to the star studded judge panel made up of award-winning rapper/album producer Joe Flizzow of Too Phat and renowned dancer/choreographer Maple Loo to determine who was to get eliminated!

Last week has brought us to the top 11 dance crews of the competition, as SHOWDOWN 2011 bidded goodbye to EGS Monsters. The crews that have engraved their names in the Top 11 include, Panic, Force 136, Bounce Stepperz, Dejavu Breakers, Borneo Crew, Elecoldxhot, Blazin Squad, HMC Phlow, Roku Steps, Stepholic and Soulution.

Hosted by Fly.FM’s reputed deejay Hafiz Hatim and showcasing a star studded judge panel, SHOWDOWN 2011 is also telecasted LIVE on 8TV every Wednesday at 9:30pm. You can catch the encore every Tuesday at 11.45pm.

“The LIVE show is about to get even more exciting now!” says Group General Manager of 8TV and ntv7, Ms. Airin Zainul. Airin adds: “It’s shocking that some really good crews landed in the bottom four last week. Make sure you vote for your favourite crew to ensure they don’t fall in the bottom four.”

Come witness the crews drop their most exhilarating moves right in front of your eyes and get your hands on the exclusive tickets to the LIVE show at these SHOWDOWN 2011 roadshows venues.

Also, get your hands on the SHOWDOWN 2011 exclusive tickets from the 8 Team, by tuning in the 8TV Quickie or by logging on to the Showdown Facebook Fan Page. You can also redeem your tickets at the Sri Pentas, Guard House every Monday to Friday from 10am to 12pm or from 2pm to 5pm.

Just as exciting as the dance warfare are behind the scenes preparation, drama and the oh-so juicy gossips that we have to splurge on the finalist in the special Diaries’ programme called SHOWDOWN 2011 Diaries…From the Streets, created especially for you to get to know the finalists a little better. SHOWDOWN 2011 Diaries…From the Streets, will air exclusively on 8TV every Tuesday at 11.30pm.

Get ready to witness even more electrifying energy, unthinkable skill and creative choreography as the TOP 11 crews step up their game and dance it out! Dont forget to keep your favourite crew in the game by voting! Who will be eliminated this week? Who will win the grand prize of RM50,000 plus the title SHOWDOWN 2011 Champions? Stay tuned to SHOWDOWN 2011, Every Wednesday, 9.30pm exclusively on 8TV.

This year, online interactivity and content will also be taken to another level. SHOWDOWN 2011fans will be able to access vast content and information as well as go social on SHOWDOWN 2011’s microsite http://www.8tv.com.my/showdown/2011/ . What’s new and great about the site this year? Not only will viewers get to know your favourite Top 12 Dance Crew better, you can also have access to video dance tips by experts (from the likes of Byron Carter and BBoy China from Thailand), LIKE your favourite Dance Crew Facebook pages, see our extensive Video Gallery (Not Seen on TV, 2010 recaps, full episodes and diaries) and Photo Gallery (Auditions, Meltdowns & Episodic) and so much more. The most exciting content will be the introduction of an interactive Online Battle application. More details coming soon!

Get ready to witness, electrifying energy, unthinkable skill, creative choreography and intense passion, as SHOWDOWN 2011 makes its way to you every Wednesday at 9.30pm exclusively on 8TV. All this and more can be enjoyed for free only on 8TV. 8TV is also on Astro’s Channel 708.

Don’t forget you can also catch your favourite 8TV programmes by simply logging to www.8tv.com.my / www.tonton.com.my. Also, follow us on www.facebook.com/8TVshowdown for web exclusives and to watch your favourite episodes of the show. Are you game? 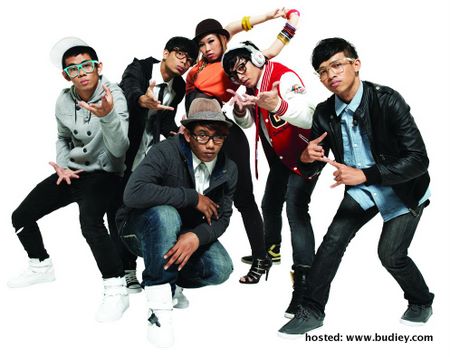 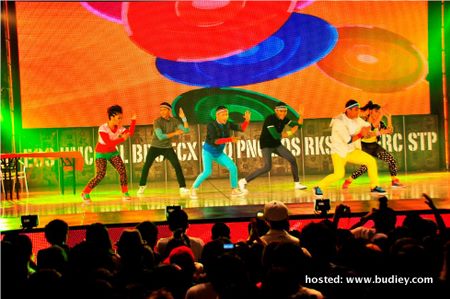 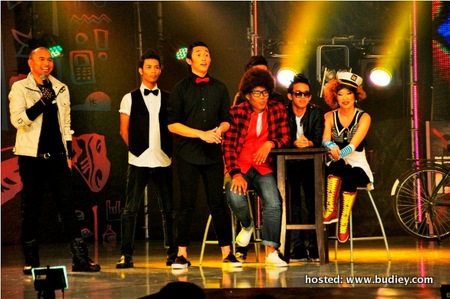