RELEASE OF DEBUT SINGLE “GONNA BE ALRIGHT ???”.
IZ’s penchant for singing and song writing has culminated in his first soon-to-be released seven-track EP titled “Gonna Be Alright ???“ containing songs he wrote whilst being on the Asian version of American Idol in Malaysia called One In A Million [Season 2/ 2008]. “Gonna Be Alright”, being his debut English single and also the title track from the EP which will be distributed under SonyBMG Malaysia in early August 2008, is currently enjoying airplays both in Malaysia (XFresh, Hitz, FLY, Traxx, Capital, Red104.9) and Australia (JOY, Nova FM, Triple J) since March 2008, shortly after 8TV’s One In A Million Season 2 ended late February 2008. It even reached the No. 2 spot on FlyFM’s CampurChart, a popular English music chart that features local musical talents and filled mostly with rock bands. IZ have also recorded ??? (Pronounced Hui Hao De), which is a Mandarin version of his debut English single (Gonna Be Alright) due to the demand he gets from his Mandarin speaking fans garnered whilst being on 8TV’s One In A Million 2. 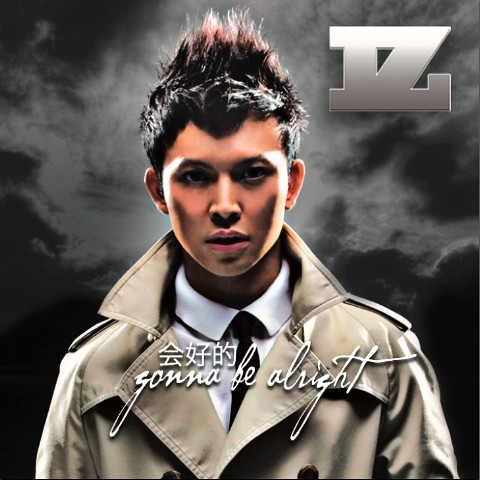 “Gonna Be Alright” was also chosen as the theme song for a Malay telemovie on ASTRO RIA, where IZ experimented his acting skills opposite Nora Danish (a very well-known Malay actress) who is also being featured on his current hot new Malay single called “Bersama, Together Feat. Nora Danish” which is already enjoying massive airplay on local Malay radios in Malaysia and Singapore since June 2008. His full studio album is already in the works featuring collaborations with songwriters, composers and arrangers from Australia, Indonesia, Japan and Malaysia. He intends to release his full album sometime in 2009.

DEBUT SINGLE: GONNA BE ALRIGHT ??? (Hui Hao De)
??? Hui Hao De or Gonna Be Alright means a lot to him. The song is a reflection of IZ’s strong character as someone who does not take setbacks as the end all. The song, written by IZ, comes from the heart, and he hopes it will inspire others to not see defeats, failures and disappointments in life as something to wallow in but used as a lesson to do better in the future. IZ intends to spread the positive messages contained in his debut single by having it recorded in more than one language. Gonna Be Alright (??? Hui Hao De) is a song to motivate, to soothe and to delight.

BACKGROUND
As a young boy, IZ grew up in Kuala Lumpur, Malaysia surrounded by influential local music producers who are friends of his father. As a result of this, the 8-year-old IZ always tagged along with his dad to the recording studio and was lucky enough to observe the many recording sessions held at the old Booty Studio (Booty Boys, Man Kidal, Roslan Aziz, Sheila Majid recorded there) in Kuala Lumpur, which was then one of the most modern music recording facilities in Malaysia before Synchrosound Studios (It’s already closed down) even existed. He knew all about analog recording by the age of ten when digital recording technology was unknown to many and not as widely used as today. These larger than life experiences during his early years have fuelled IZ’s passion in music; subsequently unleashing his talents in singing, performing and song writing.

IZ recorded the inspirational “Gonna Be Alright ???“ two days after being eliminated from 8TV’s One In A Million Season 2 reality TV show where he was the Top 9 finalists and incidentally, he was also praised for his individual fashion sense by many. Thru his debut single, IZ wants everybody to know that his journey has just begun as he intends to ride the wave he created throughout One In A Million Season 2, and to also quench the thirsts of his newfound fans and supporters. The reasons behind the recording of this EP is two-fold: One, is to keep the momentum of IZ’s singing debut going and two, to take advantage of his new found popularity alive. He is also currently planning, strategizing and setting up the groundwork for an album project, which he hopes will debut sometime in 2009. An official launch for his debut EP will be held soon, once a suitable date and time is decided.

Paul Moss, a New Zealander, who is a judge on the reality TV show, has this to say on IZ’s very first live TV performance, “IZ, you are supremely confident. Honestly I don’t know whether it is confidence or arrogance but honestly, I wanted to not like you because from the beginning I have not liked you but I have to change my mind on tonight’s performance. It wasn’t perfect but perfection is overrated. There were moments there of genuine tenderness and honesty in your performance, and that was great to see”.

“IZ is nothing than a showman. I like his flamboyant image and that was what made him different,” said Paul Moss. “IZ is a performer and it is interesting watching him on stage every week,” added judge, Syafinaz Selamat.

IZ’S PASSION FOR MUSIC
As a result of growing up in a country that is known for its cultural diversity, IZ’s tastes in music are pretty much a melting pot of different kinds of genres. He listens to just about anything that moves him and loves listening to performers who performs in languages other than English. He considers himself as musically passionate and is very into R&B, Electro, Soul, Pop and World Music. IZ is hungry to be out there; he wants to share his talents as a singer, songwriter and a performer with the rest of the world. The world is indeed an oyster to him as he thrives in each creative opportunity and it’s all because of his intense passion for the world of arts.

IZ’S ASPIRATIONS
Despite his first love in singing, songwriting and performing, IZ notes, “I do not focus my creative mind on just one thing. I aspire to be a Young Renaissance Man and am fortunate enough to have honed my singing skills and was exposed to the many facets of show business early in life. As such, I am now able to recognize that ‘show business’ encompasses elements of both the business and the entertainment worlds.”

IZ IN OZ
Talent with Brains
IZ has a multitude of talents, which have garnered him kudos and industry recognition “Down Under”. He has worked as a Junior Art Director in a few advertising agencies (TBWA, See Agency, M&C Saatchi, and Dewey & Horton) in Melbourne, Australia where he also researched and wrote a book in 2006 on the subject of cross-cultural communications, fulfilling the requirements for his Honours postgraduate studies at the prestigious Royal Melbourne Institute of Technology.

St. Martin’s Theatre
IZ also sang at club venues in Canberra, Melbourne and Sydney under the banner of St. Martins Theatre Melbourne, where the young Cate Blanchett, who is a Melbournian and a well-known Hollywood actress, first showed off her acting talents.

Iz and the Arts
IZ also had the experience of directing a corporate video, for the re-branding exercise of Chamber Music Australia, a charity body for classical musicians under 35, where Dame Elisabeth Murdoch, Rupert Murdoch’s mother, is a patron. IZ’s ambitious streak to do well in the music industry had led him to sign up as a member of APRA [Australasian Performing Rights Association Australia], a professional body consisting of composers, authors and publishers of music, equivalent to MACP in Malaysia.

Iz is also a member of the Harbour Club at the Tarra Warra Museum of Art, Yarra Valley, Victoria, which is Australia’s first major privately funded art gallery where he acquired his first artwork, which consists of two paintings at the age of 21.

IZ THE BLOGGER
IZ keeps a blog, [imborntosingsongs.blogspot.com], which he regularly updates during his free time as he considers it to be the best medium for him to personally communicate with his fans and supporters, whom he had won over during One In A Million, Season 2. His blog have received more than 16,000 hits to date and growing.

IZ’S RECENT APPEARANCES
IZ recently celebrated his 25th birthday on the 8th of June with his fans and supporters who won a competition he organised through the TV shows he was on. His birthday bash was fully sponsored by DELICIOUS CAFE (Ms. Read) as part of his promotional efforts to promote his seven-track EP prior to its release in stores in August 2008. 3 months after One In A Million Season 2 ended, he has appeared on NTV7 Breakfast Show, TV3’s Malaysia Hari Ini, 8TV’s Celebrity Chat and Quickie, ASTRO’s Ria Sentral, Gua Muzik plus countless radio stations and publications.

– Currently IZ have got two singles currently playing on radios simultaneously.
– Seven-track EP titled Gonna Be Alright, which is also the title track for IZ’s debut single.
– All songs are written, composed and produced by IZ.
– All music arrangement and recording was done in Sydney, Australia.
– Vocals were recorded in Kuala Lumpur.
– The EP was recorded as a gift for IZ’s fans that had supported him throughout One In A Million Season 2.
– The EP also features guest stars such as C. Loco (From Poetic Ammo) & Nora Danish (Popular Malay actress).
– All songs are in English except for one Malay Single called Bersama, Together, which features Nora Danish.
– The EP will be officially launched & released very soon under SonyBMG Malaysia along with the announcement of IZ’s official website.
– The release of the EP will be followed with the release of IZ’s debut album, which is already in the works and is still untitled, sometime next year.
– IZ’s debut album will include collaborations with songwriters from Australia, Japan, Indonesia and Malaysia.
– The EP took 3 months to complete from initial planning, recording to mastering.

IZ considers the number 8 as his lucky number. ?He flew all the way down from Melbourne to Kuala Lumpur to audition for One In A Million Season 2 where the flight alone took 8 hours. He went for the audition where contestants received their own candidate numbers and it was interesting that his candidate number was 10700, which equals to 8 if all the numbers were added. Funny that One In A Million itself is produced by 8TV and IZ’s hotel room was also on level 8 whilst being on the show. IZ was also born on the 8th of June 1983 and 8TV Quickie help celebrate his special day live on 8TV where IZ gave away 8 promotional copies of his debut release for free to the lucky 8 who logged on to his blog which he regularly updates during the show. It will only be natural for IZ to do a press launch for his debut release in August 2008. The CD will be out in stores prior to the official launch in the last week of this month.