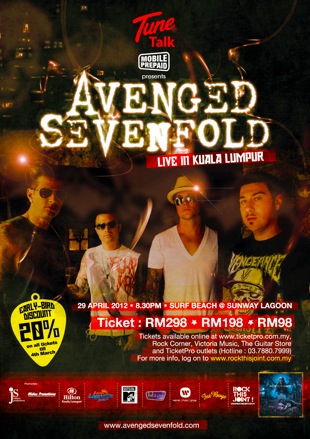 Tune Talk CEO Jason Lo said, “Tune Talk is proud to present Avenged Sevenfold Live in Malaysia! To all our rock fanatics out there, this is our present to you. We have been getting lots of request to bring in a rock act and we finally present to you A7X as we see that they are simply different! True enough, Malaysians are crazy about them. Convert your Tune Talk points to a concert ticket and be part of this rocking history!”

The band is known for their diverse rock sound and also dramatic imagery in album covers. Avenged Sevenfold has achieved mainstream success with their 2005 album City of Evil, which included singles such as “Burn It Down”, “Bat Country,” “Beast and the Harlot” and “Seize the Day.” And the success continued with their self-titled album, with singles such as “Critical Acclaim”, “Almost Easy”, “Afterlife”, “Scream” and “Dear God”.Now

Tickets for the Avenged Sevenfold Live in Malaysia can be purchased at the following locations:

Good news for Avenged Sevenfold fans! Freetickets are available for grabs via Tune Talk’s Facebook. Log on to its Facebook page at www.facebook.com/tunetalk to find out more.

The band was formed in 1999 in Huntington Beach, California with original members M Shadows, Zacky Vengeance, The Rev and Matt Wendt. M Shadows came up with the name as a reference to the story of Cain and Abel from The Bible, although it is not a religious band. Avenged Sevenfold consist of M. Shadows as lead vocals, keyboards, guitars, synth,organ, Synyster Gates as lead guitar, backing vocals, piano, keys, synth, Zacky Vengeance as rhythm guitar, backing vocals, acoustic guitars, piano, JohnnyChrist as bass and backing vocals and Arin Ilejay as drummer. To date, Avenged Sevenfold hasreleased five studio albums, Sounding the Seventh Trumpet (2001), Waking the Fallen (2003), City of Evil (2005), Avenged Sevenfold (2007) and Nightmare (2010) that has been sold for more than four million albums worldwide. The bands have received much credit for their worldwide mainstream success and were featured as second place on Ultimate Guitar’s Top Ten Bands of the Decade Hopeless Records in 2002.

Avenged Sevenfold Live in Malaysia is presented by Tune Talk and brought to you by JS Concert Productions.

To know more about Avenged Sevenfold Live in Malaysia and for updates on Tune Talk activities and promotions, log on to its Facebook page at https://www.facebook.com/tunetalk