 SARAWAKIANS WILL ATTEMPT A GUINNESS WORLD RECORD FOR LARGEST CROWD IN CAT COSTUMES DURING AIFFA 2017 OPENING NIGHT AT KUCHING AMPHITHEATRE. THIS EVENT IS ON THE 4th OF MAY 2017 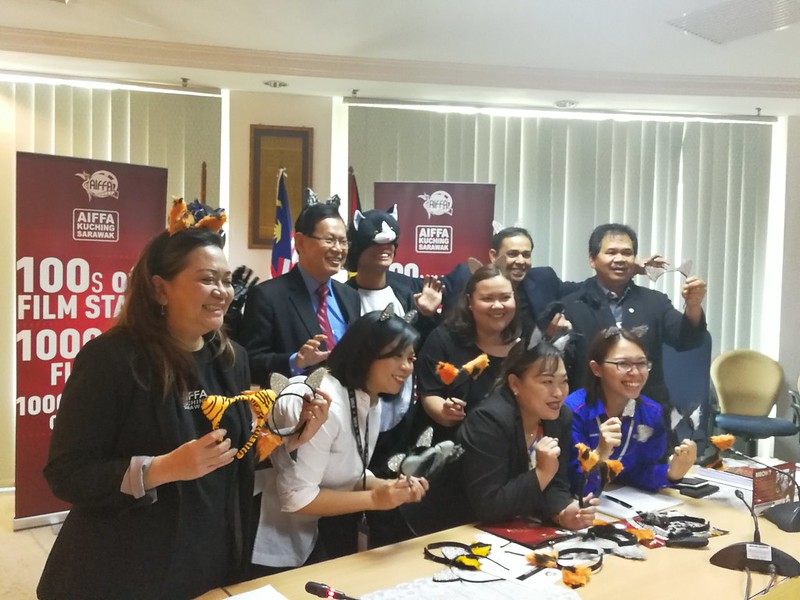  AIFFA 2017 OPENING NIGHT WILL SEE THE GUINNESS BOOK OF WORLD RECORDS LONGEST MAT IN THE WORLD BEING DISPLAYED IN KUCHING FOR THE FIRST TIME. THIS WORLD RECORD WAS SET BY OVER 400 SARAWAKIAN LADIES LAST YEAR. MORE THAN 100 FILMS RECEIVED FOR AIFFA 2017 INCLUDING THREE SARAWAK FILMS 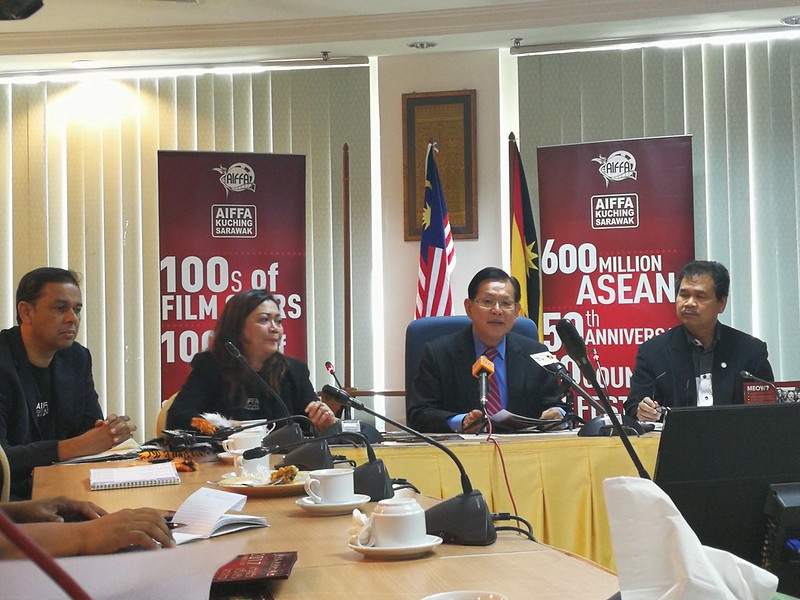 The ASEAN International Film Festival & Awards 2017 (AIFFA) is set to return in May and is ready to wow the local, ASEAN and International film enthusiasts with bigger and bolder activities and content. From 4th – 6th May, Kuching will be the center of ASEAN and the film world as celebrities from ASEAN will converge with the same goal – uniting and celebrating the best of ASEAN Golden years through film and creativity.

Speaking at the press conference after Ministry of Tourism, Arts and Culture meeting, YB Datuk Lee Kim Shin, Assistant Minister said, “On behalf of the Sarawak State Government, I am excited to see the third installation of AIFFA. We are honoured to host the ASEAN creative industry, and with open arms we extend our warm and generous welcome. AIFFA has reached its full objective in uniting and establishing the ASEAN film industry for both the leading personalities in front of the camera as well as for the creative souls behind the magical camera of film making. Kuching is ready and all geared up to make this third instalment of AIFFA a memorable experience for all the delegates.”

YB Datuk Lee also pointed out that Sarawak and ASEAN remain a fantastic place of creativity. Blessed with natural heritage in the region, it has also become the source of inspiration for filmmakers all over the world. All the 10 countries of ASEAN including Malaysia and Sarawak, of course, are natural studios that will enhance ASEAN’s filmmakers creativity and storytelling prowess.

YB Datuk Lee further remarked, “AIFFA 2017 in Kuching is set to make its mark and reach the world. AIFFA 2017 is planning to break the Guinness World Record for the largest crowd in cat costumes in Kuching. There will also be Café Film Talks and the much awaited Gala Awards Nite. Several pre-event activities like ASEAN Song Bird Karaoke Competition, Children Colouring Contest, ASEAN Food Truck Fest and ASEAN Movie Screenings take place in April and will continue until early May. Kuchingites are all in for a treat from this month till next month. This is what I love about AIFFA, it is educating, engaging and importantly the content inspires the people of Kuching and of course the tourists too in our beloved city”.

Festival Director, Livan Tajang said, “AIFFA 2017 promises even more exciting activities for everyone. International, ASEAN and Malaysian delegates and film enthusiasts will enjoy the educational Café Crawl, the 3-day film screenings at selected cinemas and the star studded opening night at the Kuching Amphitheatre. The AIFFA Biz World for networking business sessions and exhibitions will benefit many ASEAN business communities and film enthusiasts. This is through our partnership with the South East Asia Audio Visual Association (SAAVA). Also, in conjunction with AIFFA 2017, the Young Cuts Sarawak Youth Short Film Education & Competition 2017 was introduced for aspiring Sarawakian filmmakers. 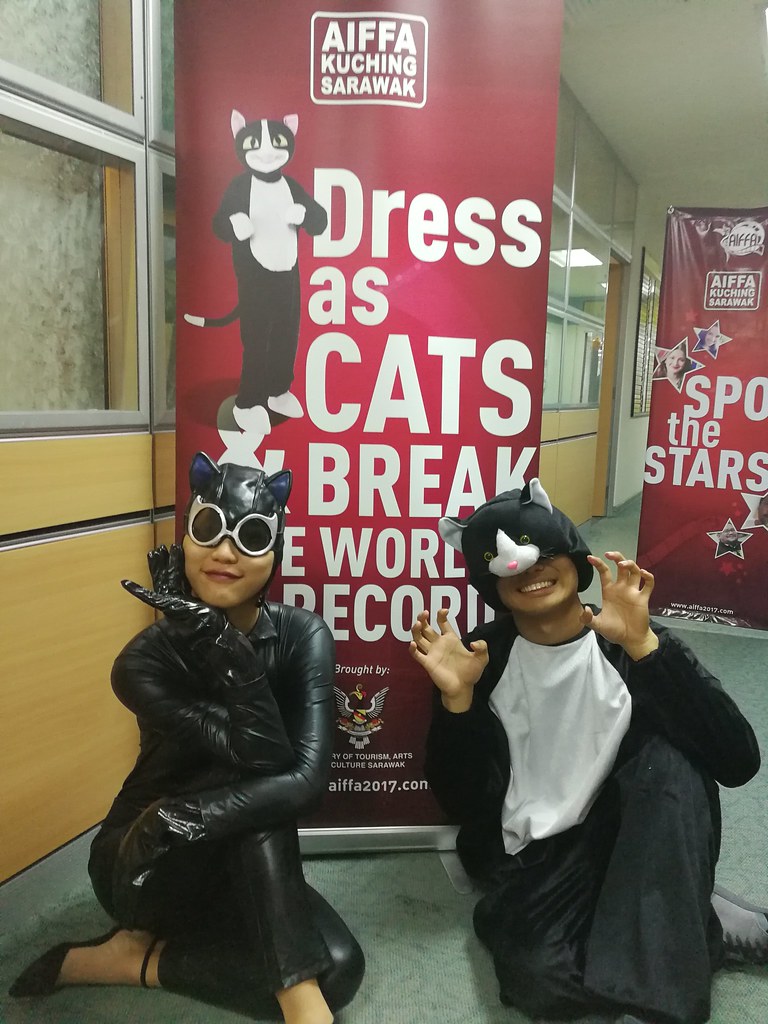 Locals are in for a treat as The Woman Who Left will be the Opening Film at the AIFFA Opening Night at the Kuching Amphitheatre. This was the Golden Lion Winner at the Vienna Film Fest 2016, a film by the famous director Lav Diaz from The Philippines. The 4th May is open to the public free of charge and you can come in from 4pm, if possible in your cat costume as we do have a Guinness World Record t-shirt for those who are part of the attempt and qualify as a participant of Guinness World Record. The Guinness adjudicator will be present. Please check the guidelines at our website www.kuchingworldrecord.com or on the ASEAN International Film Festival and Awards Facebook for more information.

The Gala Nite, of course, is the climax of AIFFA 2017. The public are welcomed to experience the glitz and glamour of the Gala Nite with performances by Indonesian singer Judika, duet by Malaysia’s actress and singer Nur Fazura and Philippines’s heart throb Jason Dy and appearance by world’s funniest comedian Harith Iskander. Of course, the most important part is who wins the coveted AIFFA trophies.”

Livan further remarked, “We are delighted to partner with Grab Car for this year’s edition of AIFFA. During the three days of AIFFA celebration, everyone in Kuching will be getting a discounted Grab ride by redemption of the GRABAIFFA code with every Grab ride at AIFFA venues. GRAB has confirmed this offer starts on 3rd of May till 7th of May for rides in and around AIFFA venues.”

“We also would like to thank some fashion designers in Sarawak for their support in showcasing the designs for ASEAN celebrities during the Gala Nite. This is also to promote our local designers who come under Fashion & Lifestyle Association Sarawak.”

AIFFA has grown to become one of the premier film fests in ASEAN in a short time given its biennial status. It continues to attract the interest of cinema audiences who have come to appreciate thoughtful and skillful ASEAN storytelling and to discover the best of the best films in the region. There are awards in 16 categories which recognize the contributions of directors, directors of photography, actors, writers and editors as well as for lifetime achievement and inspiration.