The musical has been pushed back due to further technical enhancement on its production set. The production team plans to bring it up a notch in terms of set design, screen and background projection. People will be in for a surprise as this development has never been attempted before in a musical theatre.

Despite the two-day delay, the total number of shows remains at 19 performances. The cast and crew of Terima Kasih Cinta guarantee extra effort and quality performances from February 19 to March 6, 2011. 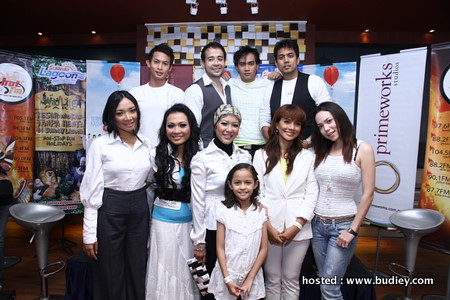 There will be two shows every Saturday and Sunday at 3.00 PM and 8.30 PM, and an 8.30 PM show every weeknight except Mondays. The musical will wrap up with one show on the final night at 8.30 PM.

For those who have purchased tickets for the shows on February 17 and 18, 2011 may exchange their tickets for other show times or collect their refunds at Ticket2U. 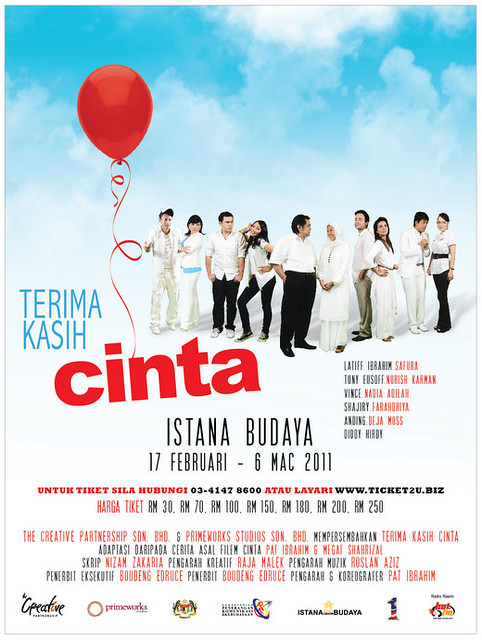 About TERIMA KASIH CINTA THE MUSICAL
Based on the multiple-award winning movie Cinta, Terima Kasih Cinta is a musical revolving around five symbolic stories that celebrate the many facets of the power of love surrounding us every day.

The musical begins with Haris who is a devoted husband and doting father. His family means the world to him but it starts to come crashing down as it gradually falls apart. Will he be able to sacrifice his love to save his family?

The next story presents Rubiah who is a strong but lonely woman. She finds love with a retired teacher, Elyas. But life with her newfound love will test her love and patience for him. Is Rubiah ready to take a leap of love and faith?

Azlan, a rich and successful magazine publisher, has everything under the sun. However, he still feels something lacking in his life. Will the pursuit for perfection and wholeness help him uncover the key to happiness?

Dyan is caught in a love triangle as she takes care of her brother Dhani, a college graduate content with life in the laidback lane. Dyan is a responsible sister who only wants the best for her brother. But Dhani resents his sister’s persistent interference in his life. But when tragedy strikes, Dyan is faced with a decision that will change the siblings’ lives forever.

The fifth story speaks about naive and optimistic Arianna who ventures on a quest to find love. Along the journey, she meets Taufiq, a shy and kind-hearted boy, who helps her in her search. But as her lover remains elusive, will she realize that what she is looking for is right before her eyes?

These five engaging stories in Terima Kasih Cinta intertwine with one another to demonstrate the power and magic of love.

About Primeworks Studios
Primeworks Studios Sdn Bhd is the content creation subsidiary of Media Prima Berhad and Malaysia’s largest production company. Producing TV content since 1984 and feature films since 1994, it generates an average of over 5,000 hours of TV content and 10 movies annually.

About Creative Partnership Sdn Bhd
The Creative Partnership is built upon credential of individuals and key personals, having a strong foundation, a wisdom tool to the young and energetic team that have vast experiences and expertise in the respective field of event management and theatre production.

Founded upon in becoming preeminent in what we do, we position ourselves to grow from strength to strength, prioritizing customers and clients. We extend ourselves to client’s requirements and consumer’s expectations making each and every taken task a remarkable for both us and client.