Star Studded Cast Headline London’s West End Musical Celebration Thriller Live – Malaysia 2015! Milestone Production, the organiser of THRILLER LIVE – internationally acclaimed musical all the way from West End London is thrilled to announce that the show will feature several celebrities such as ‘Prinnie Stevens’ and ‘Alex Buchannan’ who will be performing together with Sean Christopher, MiG Ayesa and 20 other West End actors & actresses. Stevens and Buchannan achieved their height of fame when they competed in The Voice and even have their own singles and albums.

When asked to comment on the cast of Thriller Live, Grace Lee, Managing Director of Milestone Production said that she was excited to bring in a FULL West End Cast as well as stage props and sets from the UK. Malaysians no longer need to travel to West End, Broadway or Australia to watch and experience THRILLER LIVE.

“We are fortunate to have secured the same cast which is currently touring Australia and have agreed to make a stopover in Malaysia only in 2015. According to some of the Australian reviews, some of the tickets are already currently on waitlist due to the spectacular cast, crew and show dynamics.” Lee added.

The THRILLER LIVE cast in Australia has received excellent reviews. According to one of the writers, Paula Katsikas the show was nothing short of brilliant! The words exciting, thrilling, energetic and riveting from start to finish come to mind. Michael could captivate all generations like no other artist and though he may not be here in person any more, he continues to do so in ‘THRILLER LIVE’ with his music.

Another contributor Q (from Damienshields.com) also added that the highlights of THRILLER LIVE were the ensemble numbers which shared the heavy load of Jackson’s talent with class and passion thus creating some breath-taking harmonies along the way. These group moments for him were the strength of the show and a true tribute to the King of Pop’s music.

Created to celebrate the career of the world’s greatest entertainer Michael Jackson, THRILLER LIVE is set to thrill audiences this year at Putra Indoor Stadium, Bukit Jalil, Kuala Lumpur from 19th till the 25th March 2015. Catch these distinctive high energy performers in action as they THRILL you in this powerful visual, audio and electrifying musical journey of Michael Jackson’s magical 45 years illustrious career.

THRILLER LIVE had been touring the world, played over 3,000 shows globally to 3 million fans, visited over 28 countries. In 2014, THRILLER LIVE has entered the list of Top 20 Longest Running Musicals in West End History. Celebrating its 7th record breaking year at Lyric’s Theatre and after selling more than 3 million tickets worldwide, THRILLER LIVE will soon overtake the West End records set by Grease and Oliver!

THRILLER LIVE combines eye-popping video footage and special effects with some of the legendary recording artiste’s hit songs including I Want You Back, I’ll Be There, Can You Feel It, Rock With You, Thriller, Beat It, ABC, Man In The Mirror, Dirty Diana, Billie Jean and add on with the iconic Earth Song. Earth Song is Michael Jackson most successful UK Single as it’s had topped the UK Singles Chart for 6 weeks in 1995 and sold one million copies. 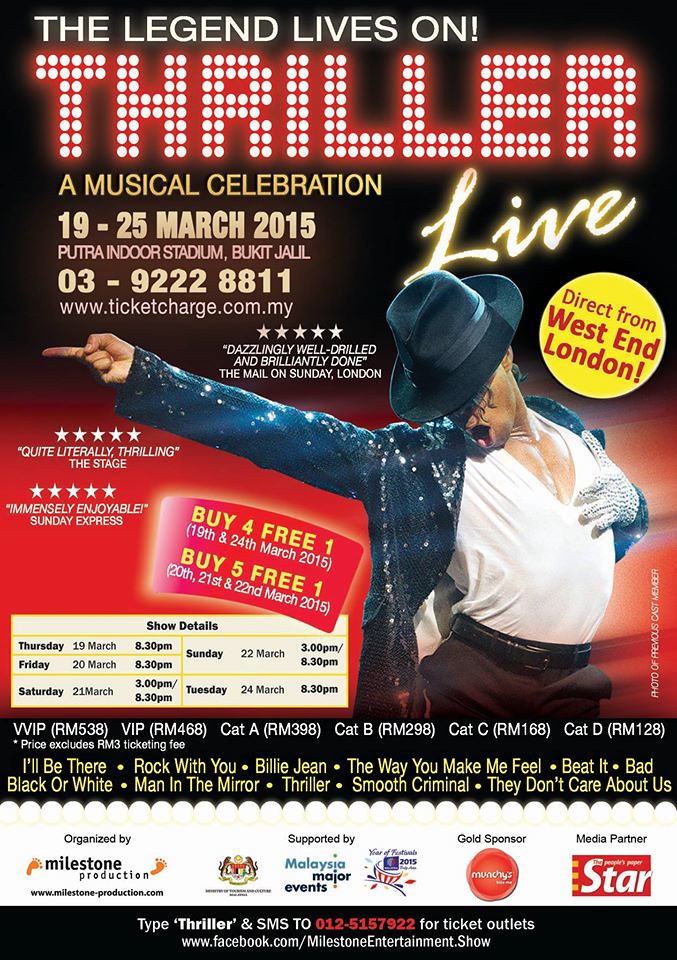 MiG Ayesa
Born in the Philippines and raised in Australia, MiG Ayesa is a familiar face in Broadway and West End. MiG started his professional career in Australia and then chosen to join the London cast including a royal variety performance Her Majesty, Queen Elizabeth II. MiG had been involved in West End Production include We Will Rock You (Galileo), Rent (Angel) and the best of all, THRILLER LIVE (Michael Jackson).
As experienced as he is, his Broadway credits included Burn the Floor (lead vocal), Rock of Ages (Stacee Jaxx), Grease (Danny Zuko), Cinderella (Dandini), Aladdin (Aladdin), West Side Story (Tony), The Music of Andrew Lloyd Webber (Australia and Asia Tour), Rent (Angel), Fame (Joe Vegas) and etc. He has performed throughout the USA, UK, Australia, Canada, Japan, Korea, Philippines, New Zealand, Singapore, Hong Kong, Beijing, Austria, Dubai and South Africa. Despite his success on the stage, he had done TV shows, to films and has even released albums. MiG, the rock star is now “thrilled” to be back in THRILLER LIVE and dedicates his performance to the memory of Michael Jackson and fans.

With vocals that simply grab you, and a natural stage presence that leaves you breathless, Sean Christopher grew up learning his foundations from the legends, Michael Jackson. A natural talent as his charm on the stage can catch the eyes of all.

He has been touring with his RnB group across and Ireland. Furthermore, he had taken the lead in many West End-style musical productions. He had been playing this iconic role of Michael Jackson in Thriller Live Musical and touring from country to country. Now he is once more set to returning to THRILLER LIVE to continuing the work of the legendary King of Pop.

As the only female lead casts in THRILLER LIVE, Prinnie is undoubtedly an all-rounder performer from Australia. She is definitely an excellent singer, dancer, songwriter and presenter. She started in the Australian Premier Musical, Rent and continued with other musical such as Leader of The Packand Footloose, Oh, What A Night! And etc. It was her Helpmann nominated Performance in Oh, What A night! That took her to a higher level.

As a recording artiste, she shined herself in The Voice, an Australian well known TV program. Despite her success, she is representing MMAD, a charity to assist young Australian to fight the battle of life through inspiration of music and mentorship. She had released single “Don’t wake me up” that become number 1 on the music chart across Australian radio and continued to have much success. Shortly after the success of The Voice, she released EP “One Night” that debuted at #13 on the chart. Prinnie is very much excited to be making a return to musical theatre, THRILLER LIVE. She continues to impress the fans with her ability to go from TV to the recording studio and back to the musical theatre stage cements the fact that she is one of Australia’s most exciting artists.

Alex is a singer, songwriter, actor and a dancers that currently starring as one of lead role for lyric theatre. This Multi-talented performer from Manchester, Alex Buchanan is one of those artists who possess all the qualities to have a long career in the entertainment industry. Alex is a self-trained performer with amazing vocal, dancing and acting ability is even able to impress the crowd.

For the record, Alex manage to secure his lead role in THRILLER LIVE after singing just four lines of a song at his first and only audition! It’s pretty impressive for a self-trained performed that yet to have proper vocal training. In the first 6 months of his career he has choreographed 2 music videos and has been working on his debut album.

THRILLER LIVE is supported by Malaysia Major Events, a division of Malaysia Convention & Exhibition Bureau, an agency under Malaysia’s Ministry of Tourism and Culture.

About Malaysia Major Events
Malaysia Major Events (MME) is a division of Malaysia Convention & Exhibition Bureau (MyCEB), an agency under the Ministry of Tourism and Culture, Malaysia (MoTAC). MME was established under the Government’s Economic Transformation Programme (ETP) to identify, promote, facilitate as well as support viable international events to be staged in Malaysia. With its main objective to enhance Malaysia’s economic growth and profile, MME is also tasked to identify and support major event bids for sports, arts, lifestyles and entertainment events and provide assistance to home-grown and home-hosted events in order to further strengthen Malaysia’s global appeal as the venue of choice for major events in the region. MME also acts as a conduit between the public and private sectors in ensuring seamless processes are achieved through synergistic relationships with diverse event stakeholders in staging successful events in Malaysia.