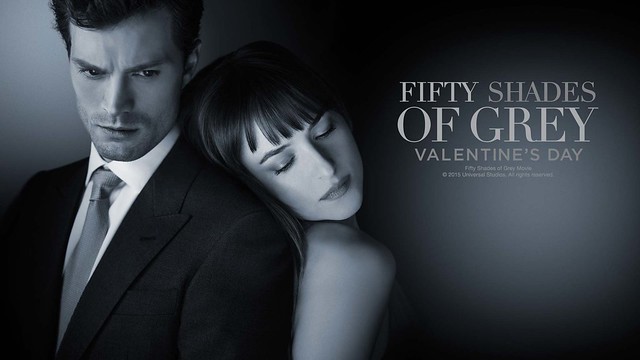 1. What does Christian Grey do to make his billions and own a helipad? Just “business”?

2. Anastasia’s friend Kate graduated at the top of the class for journalism. Exactly which journalism class teaches, “Not feeling well on the day you have an interview? Eh, just send an uninformed friend to read the questions off a piece of paper. Your health is more important!”

3. Why did Bob’s broken foot stop her mother from attending her daughter’s graduation? Was it broken off, and she’s in the middle of sewing it back on?

4. Why are college students so old in Vancouver? Do they have a different system?

6. Why does Christian Grey have a driver, and yet sit in the front seat? Perhaps front-seat riding is what separates the billionaires from the millionaires: by sitting closer to the front of the car, they get to every meeting one second earlier.

7. Is there anything more oxymoronic than a needy sadist?

8. There is NO. WAY. Anastasia would wear that dowdy floral blouse and cardigan (with her hair in a ponytail!) to interview Christian if she had the hot business dress she wore later sitting in her closet.

9. Anastasia somehow graduates with a broken laptop and a flip phone. At the very least, I hope her CB radio is still functioning properly or she’ll never know if there’s a smokey on her trail.

10. Why was Christian so alarmed when he got a call from a tipsy Anastasia at a bar and jumped into action to rescue her? Does he not know how bars work, alcohol works, or college students work? He chastises her, “I’m all for testing limits, but you put yourself at risk last night.” Being flogged is all good fun, but apparently getting vomit in your own hair is beyond. The. Pale.

11. Related: How did he track her down with just an incoming cell-phone call? Is Grey Mega-Enterprises Holdings Biz-Dotcom Super-MoneyPlace actually a chip-implanting company that discreetly inserts tracking devices into everyone who enters its HQ?

13. Why was Kate so concerned with Anastasia moving too fast with Christian, considering Kate had instantly jumped into bed with his brother?

14. If Christian’s so rich and doesn’t share beds with people, why wouldn’t he have gotten Ana her own room at the hotel? Surely he must have 100,000 MoodyRichGuyAirlines points he could cash in by now.

15. For somebody who initially clarifies, “I don’t make love. I f—-. Hard,” he seems to spend just about every sex scene moving in Red Shoe Diaries slow motion.

16. Part of the contract involves Christian dictating Anastasia’s well-rounded diet. So why would he be okay with her eating a coffee-shop muffin? Or are processed breakfast foods just one of his many mysterious businesses?

17. Why is Christian often wearing jeans in the sex scenes? Is he a Never-Nude(TM)?

18. Why does Christian need so many canes, all of them of such minutely different diameters and lengths? Are they like golf clubs to the discriminating sadist? Does he squat down and look carefully at a woman’s rear-end and muse, “Hmmm … I’m looking at the curve of your rear end, and taking into account the lumps on the satin sheets you’re lying on, and the fact that there’s a northwesterly breeze coming through the AC duct … I’m gonna go with a number-six cane.” [FLOG FLOG FLOG FLOG FLOG] “Shoot, I shanked it. Should have gone with the #5.”

19. Before meeting Anastasia, Christian has had fifteen other women under contract and living in his guest bedroom/butt-heal-atorium, and he’s only 27. That is a daunting amount of paperwork to have gone through in a relatively short time frame. How does he have time to do all his business?

20. From now on, I will refer to a bellybutton as “nature’s ice caddy.”

21. She knows to strike “genital clamps” from the contract without any questions, and yet she needs more details on butt plugs?

22. Considering Christian is a business wunderkind, he must be a very shrewd negotiator. And yet the man who at the onset declares that he will never date, he will never sleep next to a woman, and that “this is the only sort of relationship I have,” he pretty quickly volunteers the deal point that he will take her on weekly dates, which is seemingly antithetical to his entire life philosophy. Seriously, how did this guy make billions?

23. For all the overtones of danger from every one of Christian’s family members (mother: overbearing and scarily Marcia Gay Harden-y; brother: possibly dangerous lech?; sister: OH GOD SHE’S COMING FROM FRANCE TO DELIVER ONE LINE!) they all end up being completely innocuous, like a family you’d see in the background of a Gossip Girl episode.

24. If a peacock found out what its feathers were being used for, would he feel good or bad about the whole thing?

25. Anastasia begs Christian to “Show me the worst; it’s the only way I’ll understand,” and then he whips her hard, six times, and she leaves, saying, “Don’t you dare come near me.” Question: Was the giant red room stocked with whips and canes not a clue that something like this was going to happen? Shouldn’t she be surprised that this didn’t happen on the first day? It’s like someone being brought into John Mayer’s storeroom of guitars and then being stunned when forced to listen to him solo for three hours.

26. It wouldn’t be a Twilight movie without an apple scene.

27. Is there a helicopter valet? If so, do you have to tip them? And do they spend 98 percent of their time loitering on rooftops, hoping the wind doesn’t muss their perfectly parted hair?

28. Does Christian have a yacht, or does he only travel by air? When are we going to meet his boat, The Bon(dage) Voyage?

29. Man, is it easy to park in front of Grey Enterprises Holdings BizCom LLC Huge-Corp!

30. For a man so particular about his sex practices, Christian has no qualms about making love to a sweaty, post-run Ana.

31. Did Christian buy those first-edition Thomas Hardy books from the same bookseller where J. Lo’s boy next door bought her that first edition of The Iliad?

32. How many takes did it take Jamie Dornan to say “I’m fifty shades of f—-ed up” without laughing? Similarly, how many times did screenwriter Kelly Marcel type that line and then delete it from the script?

33. Why is it so hard to get a press photo of a young, press-beloved corporate CEO who clearly steps out frequently in public?

35. Christian makes a big deal of telling Anastasia that she can’t disclose anything about his sexual tastes. But after handing her the contract, he tells her to “e-mail him with any questions.” Wouldn’t that create a paper trail?

37. What was the business emergency he got called back to Washington for? He seemed pretty alarmed. Maybe his pencil supplier had a bad eraser-crop?

38. Why is Anastasia’s mom preoccupied with her much-younger husband’s diet, warning him not to get fat and serving him little more than gazpacho soup? He appears to be in Adonis-level shape. It’s just gazpach-overkill!

39. Is it mandated that all of his sexy assistants always wear grey? And did he model their seemingly indistinguishable look from old Robert Palmer videos?

40. Is Jamie Dornan intentionally playing this wood-sporting character so woodenly?

41. Who wants to listen to maudlin piano music after sex? Couldn’t he break out “Crocodile Rock” or something?

42. Why would “Crazy in Love” be the theme for a guy who’s self-admittedly not crazy about love?

43. Didn’t “laters” go out of semi-fashion in 2011? And doesn’t it seem like a sad screenwriting move to try to force a quick connection between two characters via some dopey, outdated slang insertion? Whatevs.

46. Remember Grey Gardens? Boy, that was a much better movie than this.

48. How did they possibly do a movie about love in an elevator without once using Aerosmith’s “Love in an Elevator”?

49. Why does Grey drive on a parkway and park in a driveway?

50. Isn’t this movie supposed to be sexy?