If you haven’t heard already, the Edison Chen naughty picture scandal in Hong Kong is even bigger than Britney Spears. Edison Chen took his laptop in for repair, but didn’t bother to first remove intimate pictures he took of himself and his former girlfriends. Even Maggie Q, one of Edison’s former girlfriends, has been implicated. According to Chinese culture a celebrity involved in such scandals may have their career ruined. Even Jackie Chan is afraid to discuss this scandal. A lot of people are blaming Edison, but all the girls were willing participants, and they put on a good show for his camera, so they aren’t so innocent. It is because of this scandal that Hollywood Grind news has been so slow. We have the 1,300 pictures that were on Edison’s laptop of him, and all his celebrity girlfriends, and after putting them up our site was crushed by the traffic, so we took them down temporarily and left a few dozen pictures for you to see, but they will all be back up later this week. Click here to find out the latest on this HUGE scandal. 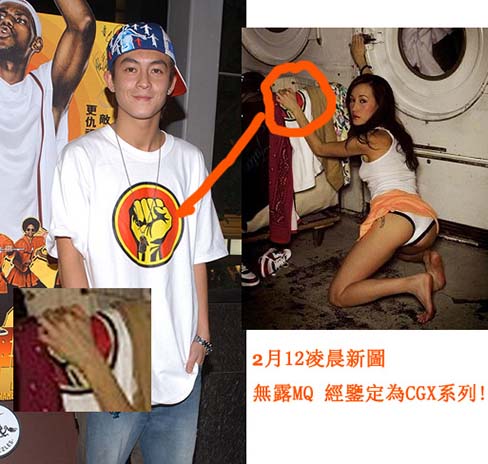 Comment: How do you know the people around you aren’t like Edison and those female stars? Perhaps you are judging Edison and them when you get naughty too. You’re just lucky no one exposed your privacy. These photos shouldn’t have even been exposed in the first place. If you want to talk “morality”…first of all, the person who stole the photos…shame on you for stealing. But I have no pitty for Edison, because I heard he was showing the photos off to get people looking at those photos. That is creating temptation for someone to steal it, so you deserve it Edison. The girls on the other hand…what they do with Edison is their privacy, it should be only between the two of them in the first place. I’m sure if they knew that these photos would have been exposed, they wouldn’t have taken it. It’s like, would you have sex with Edison if you knew people were looking at you? But Edison had to invite others to look into the privacy that belongs to himself and the female stars only.