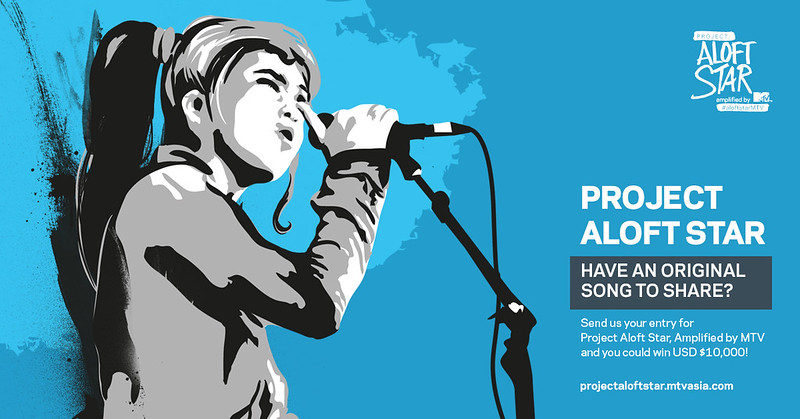 Competition Expands to Include Taiwan and South Korea, Now Open to Nine Markets

“The Aloft brand has always set the stage for the hottest up-and-coming artists, and over the past two years, Project Aloft Star, amplified by MTV has generated a tremendous response from musicians and fans, alike. We are excited to kick off our third edition, continuing our support of emerging talents by providing a platform to showcase their music to a larger audience,” said Vincent Ong, Senior Brand Director, Asia Pacific Brand Management, Starwood Hotels & Resorts. “Additionally, we are thrilled to continue our partnership with MTV Asia, further fuelling our passion for live music, pop culture and design-led initiatives.”

“We are delighted to partner with Aloft for the third time! We share a like-minded vision of supporting up-and-coming artists and giving them a platform to shine. The music scene in Asia is going from strength to strength and this collaboration enables us to continue providing vibrant and entertaining experiences to youths, by helping them discover the next generation of artists,” said Paras Sharma, Senior Vice President, MTV, Comedy Central and Paramount Channel Brands and Digital Media, Asia, Viacom International Media Networks.

Starting 1 June until 25 July 2016, Aspiring Musicians are Invited to Submit Original Songs to projectaloftstar.mtvasia.com for a Chance to Win US$10,000

Starting 1 June through 25 July, bands, artists and songwriters are invited to showcase their talents for the chance to snag the coveted title of Project Aloft Star winner in Asia Pacific. This year, participants may submit their original songs – either through YouTube video links or SoundCloud audio links to the website at projectaloftstar.mtvasia.com. HERE is a video containing tips on what not to do for your submission.

Between September to October, shortlisted finalists will perform at the finals in front of a live audience and a panel of judges from MTV, Aloft, and the music entertainment industry. One winner from each contest cluster will walk away with US$10,000, as well as the chance to be featured on MTV platforms in Asia.

Public Voting Contest
From 29 July to 22 August, the public can vote for their favourite videos from curated entries on projectaloftstar.mtvasia.com. Voting fans in each cluster will stand the chance to win US$1,000. Voting is open worldwide and the top 5 entries per cluster will be determined by a combination of public votes and a panel of MTV judges.

Aloft and MTV as The Platform For Emerging Artists
Both MTV and Aloft have built a reputation for advocating and supporting emerging artists, with several Project Aloft Star winners achieving further success. GTXperiment (formerly known as Clinton and Ashley) from Malaysia, the winner of the Southeast Asia cluster in 2014, launched their debut album in August 2015. Known for their stand-out beats fusing hip hop and indie pop, their singles “Highdrated” and “Lost” topped Hitz FM’s MET 10 Chart in Malaysia while they toured the region. Jenny & the Scallywags from Thailand, the winner of the Southeast Asia cluster in 2015, went on to release their first self-titled EP, featuring their single ‘Sounds Like Maybe’ in 2016. The single reached number one on Thailand’s top indie radio station Cat Radio’s chart. Run Pussy Run, the winner of the India cluster in 2015, performed at the Hornbill International Rock Competition in Nagaland, India and won the “Best Songwriting” award that same year.

Music and entertainment powerhouse MTV is the only global music player with coordinated local on-air and online teams, reaching millions of music fans every day. From large-scale live shows such as MTV World Stage in Malaysia and MTV Music Evolution Manila in the Philippines to on-air programmes MTV ASIA SPOTLIGHT and MTV PUSH, MTV is widely recognised as a youth destination for new music and talents.

Rocking the world since its debut in 2008, Aloft is a trailblazer in the live-music scene across the globe. The brand has always been committed to cutting-edge music programming, leading the way as an industry innovator in terms of supporting emerging talent. ‘Always on’, Aloft Hotels continuously brings together live music acts from local and established talent through its Live at Aloft Hotels music program in its buzzing W XYZ bars across the world – offering differentiated experiences for savvy, hyper-connected globetrotters.

About Aloft Hotels
With more than 100 hotels in 16 countries around the world, Starwood’s Aloft brand delivers a fresh approach to the traditional staid hotel landscape. For today’s (and tomorrow’s) connected, curious and communal evolving global traveler, the Aloft brand offers a tech-forward, vibrant experience and a modern style that is different by design. For more information, please visit www.alofthotels.com/experience.
About MTV
MTV is the world’s biggest youth entertainment brand. With a global reach of nearly 785 million households, MTV is the cultural home of the millennial generation, music fans and artists, and a pioneer in creating innovative programming for young people. MTV reflects and creates pop culture with its award-winning content built around compelling storytelling, music discovery and activism across TV, online and mobile. Outside of the United States, MTV is part of Viacom International Media Networks, a division of Viacom Inc. (NASDAQ: VIAB, VIA), one of the world’s leading creators of programming and content across all platforms. For more information about MTV in Asia, visit www.mtvasia.com.