As Innovators SAMSUNG takes the world in imaginative new directions with its services and products and the same can be said with LMFAO whereby the duo are more than dance/pop music creators….they are scientific spinsters of a carefully crafted soundtrack for a new generation of global party people.

“LMFAO is a super group and our mission since the beginning is to change this world into a party planet, one show one at a time! The LMFAO fans, better known as LMFAO-sters, Baby Babies; Party Rockers, Wigglemiesters and Shufflin Zomb Zombs, who have supported us through thick and thin all the way to Number One ! It is my duty to carry out LMFAO’s Party Planet Mission and keep the Party Rockin’ with super friends; The Quest Crew, DJ Air, Q Da Danca, Shuffle Bot, Nate & Furr and Charley Pearl all better known as Redfoo & The Party Rock Crew,” says Redfoo.

Sky Blu still recovering from a back injury is unable to accompany his partner Redfoo on the upcoming Asia tour dates, Sky was diagnosed with 3 herniated discs. Currently his back simply cannot take the stress of a multi-song performance.

Eager to return to the stage Sky Blu added, “injuries like these are tough because you can’t see them…you can only feel them. It’s been challenging but I’s doing everything necessary to be back at 100%. I can’t wait to get back out there. Until then, keep the party going!”

Fans can catch a glimpse of the band when they arrive in KLIA from Seoul, Korea on Sunday, 8th April via Korea Airlines at 9.55 pm

LMFAO FT. REDFOO PARTY ROCKS ASIA is brought to you by JS Concert Productions and presented by Samsung.

For ticketing enquiries, call Ticketpro Hotline: +603-78807999 or get your tickets online @ www.ticketpro.com.my. All tickets purchased with the earlier date of March 29 stated on it will still be valid for the April 9 show. 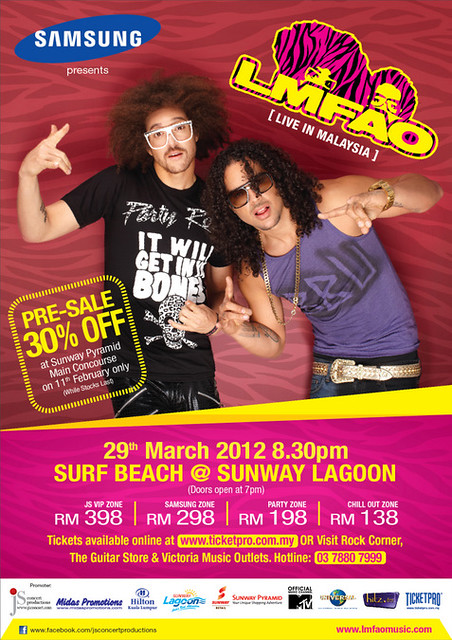