“I keep saying to everyone I feel like I’m walking into a snow globe, a fairy tale, every single day,” says Lily Collins, star of Relativity Media’s as yet untitled Snow White, which co-stars Julia Roberts as the Evil Queen. “It’s so epic. I was part of a costume ball today, so you can online imagine the oufits.”

SNOW WHITE, which will be out on 16 March 2012, is directed by Tarsem Singh (Immortals) and promises a world as surreal as anything dreamed up by the Brother Grimm. 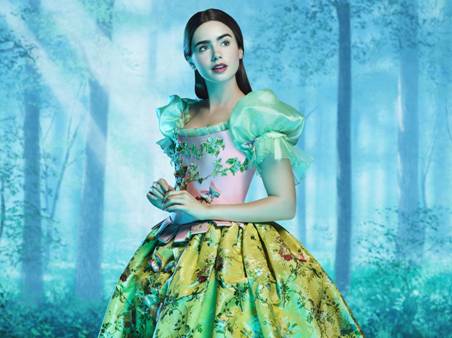 Collins (The Blind Side, Priest) describes this Snow White as ‘a joyful person who lights up a room and maintains grace at all times.’ With a father played by the recently cast Sean Bean, she’s fine as long as the King is around, but… we all know how that turns out. “She’s a naïve innocent young girl who turns into a woman and really finds herself.” Collins says.

Collins says this will not be passive princess, but it’s not a cynical take on the folktale icon either: “She’s very much that fairy tale princess we’ve all read about in books. She’s been modernized in a way that she becomes a fighter in the end.”

The Social Network’s Armie Hammer plays the prince, who finds himself stuck in a love triangle between Snow and her wicked stepmother, because he can shift the balance of power in their mythical realm. “They’re competing for the prince in separate ways,” says Collins. “The Queen wants to use him to better herself. I’m seeking his help to gain back my kingdom from the Queen. She has her intentions from the start. I go from seeking his help to falling in love, though obviously there’s something of a spark from the beginning.”

Right now, Collins (daughter of singer Phil) is simply trying to withstand the withering nastiness of Roberts’ Evil Queen, who plays it with a passive-aggressive charm – maintaining a “Who me?” sweet demeanour while repeatedly slashing the young princess down to dwarf size. “You can’t figure out if you are supposed to like her or hate her,” Collins says. “But if you happen to be the victim of it, you really feel it.”