PT Multistrada Arah Sarana (MASA) Tbk. as the tire manufacturers of Achilles, made another breakthrough in the second round of Achilles Formula Drift 2013 which will be held in Speed City, Kuala Lumpur, Malaysia, Sunday, September 1, 2013.

Not only fulfilled by drifter from various countries, this big event also performing the top rock band from Indonesia, KOTAK, which will hit the Speed City, Kuala Lumpur. 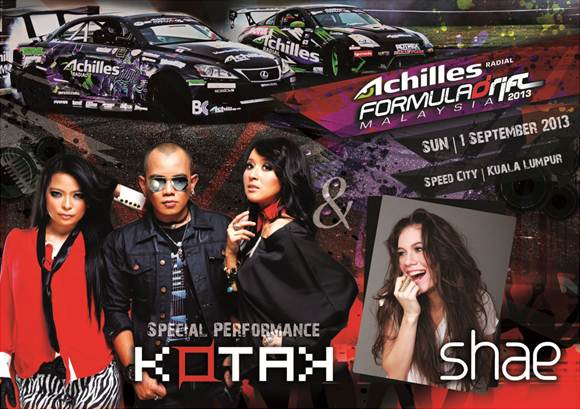 The presence of the band consisting Tantri (vocals), Chua (bass) and Cella (guitar) at this drifting arena will be a different matter for the Achilles Formula Drift Asian Series event ever. Band that have a lot of fans in the neighboring country Malaysia, admits surprise and proud to perform in such an International scale motorsport activities. “It’s something new for Kotak who has never been appeared in previous motorsport event,” said Tantri, vocalist.

Myriad achievements have been achieved by a committed band in the rock music track, such as Jawara of The Dream Band, 2004, Artists Solo / Duo / Collaboration / Best Rock Group in the event the AMI Awards 2009, the Most Favourite Artist Breakthrough @ MTV Indonesia Award 2009, The Most Pop Rock Group, and Chua was named as The Favorite Bass Player at SCTV Music Awards 2013.

Chosen as the Brand Ambassador of Achilles, Kotak Band, according to the President Director of PT MASA, Pieter Tanuri, it is because we want to play in not only in the automotive segment. “We want to develop the potential market. Currently Achilles targeting young people for the market. We deem Kotak to appropriate represent the younger generation,” said Pieter.

Appearance of Kotak band in motorsport activities in Kuala Lumpur this time, he continued, is because he believes that music is a universal language. “The people of Indonesia and Malaysia have a taste in music that is not too much different,” he added.

Warner Music Indonesia, who organize Kotak also carries a singer who is now favored by the younger generation in Malaysia, Shae (read Sye). Both Kotak and Shae will entertain motorsport loving public with their hits like “Pelan Pelan Saja”, “Beraksi”, “Tendangan Dari
 
 Langit”, and “Rise and Fall”. The song “Rise and Fall” is a song dedicated Kotak and J-Flow for Achilles and Manchester United partnership.

Arrived in Malaysia on Saturday, August 31, 2013, Kotak and Shae will participate in a taxi drift with Achilles Drift Team. Meanwhile on Sunday, September 1, 2013, Tantri, Chua and Cella will perform starting at 11:30 to 13:00 Malaysian time. Continued with the Meet and Greet from 13:00 to 13:30 pm Malaysia time.