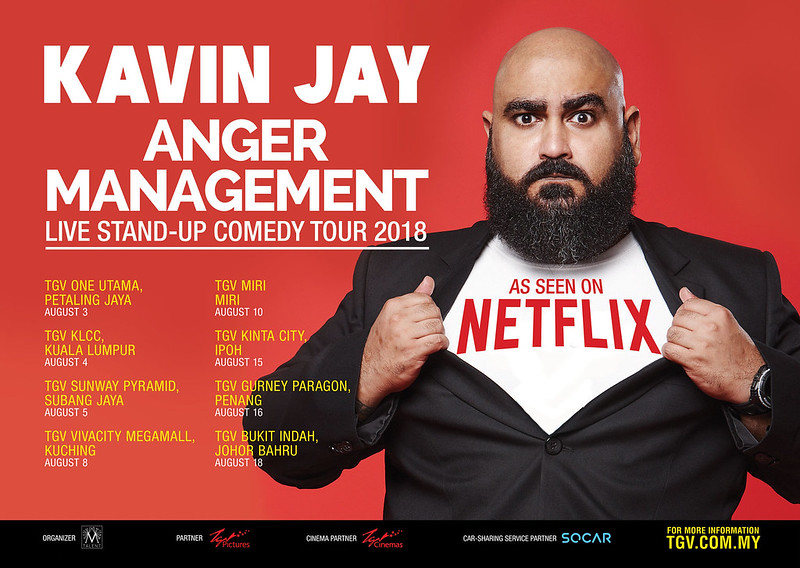 The nationwide tour comes after Kavin Jay joined the ranks of notable comedians like Russell Peters and Gabriel Iglesias with his own Netflix Original ‘Everybody Calm Down!’ which began streaming on the Netflix platform as of February this year. Being one of the only 3 Southeast Asian comics with their own Netflix special, Kavin now plans to bring his world class stand-up comedy, live to audiences across the country.

“I have not done a solo tour before, and I think it is high time I did. I love performing for Malaysians and if they can’t come to me, I’ll go to them. It is always so much fun to make my fellow Malaysians laugh, and especially after all that we have been through these past few weeks, I think a little entertainment is in order!” said Kavin Jay.

Kavin Jay’s comedic journey has been a nothing short of an adventure. The 38-year-old comedian has been doing comedy since 2006, but if it weren’t for his late brother, Kavin would not have ventured into comedy. It was a journey of trial and error where he eventually learnt that the art of comedy has its own science and methodology behind it.

Kavin in now setting foot in 8 cities across Malaysia and this nationwide tour is said to be one of the largest national comedy tours in Malaysia. Out of the 8 cities, TGV Cinemas is honored to be hosting 7 of the shows as the cinema partner whilst SOCAR Malaysia will be the tour’s car-sharing service partner in Peninsular Malaysia. Joining Kavin on this very much anticipated tour is Mister Potato’s Papi Zak and up-and-coming comedian Brian Tan. 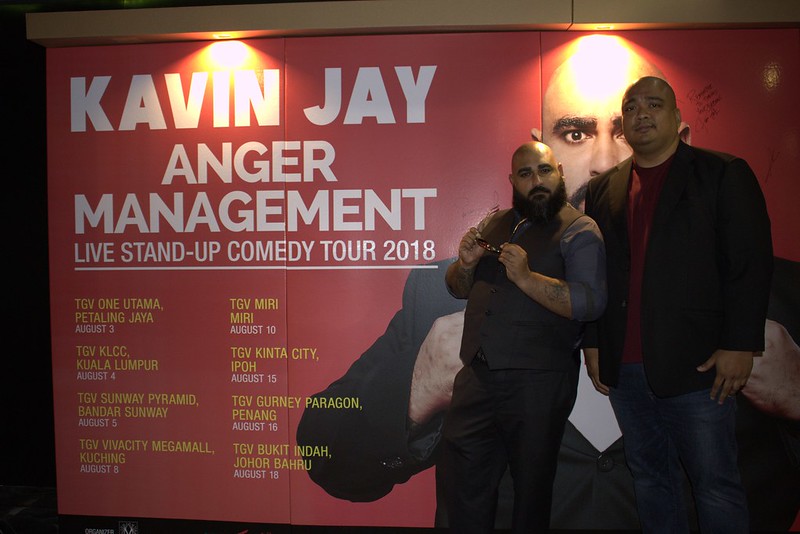 “We aim to offer our customers the best content and entertainment that is beyond movies. We also take pride in providing a venue which caters to an array of events, giving guests a comfortable and memorable experience” said Mr. Sisubalan Ehambaram, Distribution Manager of TGV Pictures Sdn Bhd.

“KAVIN JAY : ANGER MANAGEMENT” tour is geared to be an hour of all-new material filled with unbelievable stories of his life, including all the bad choices he has made that has taught him to be a better person and even better Malaysian. The tour details are as below:

The programme begins at 9.30pm and the ticket price will be ranging from RM88 to RM108. Early bird tickets ranging from RM78 to RM98 will be available from the 28th of June onwards.

** For all TGV venues, tickets will be available on ​www.tgv.com.my 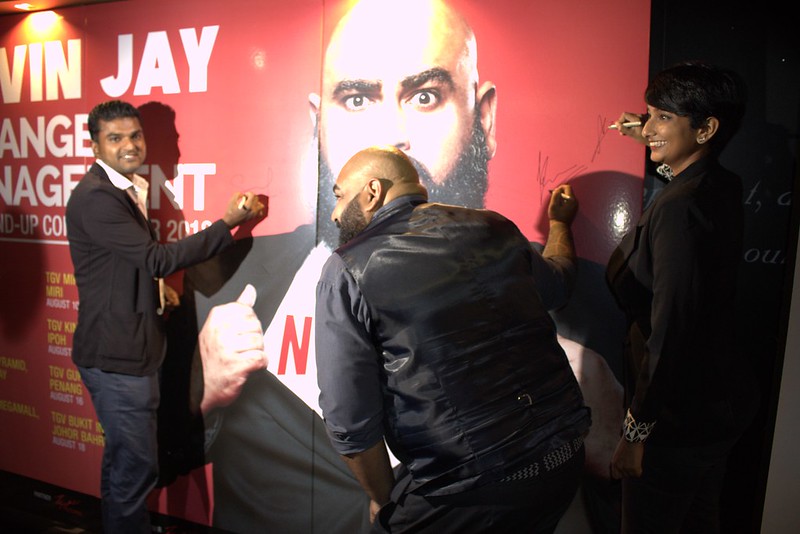 ** For Labuan only, tickets will be available on Peatix as the show will be held at Rusty Blade Bar + Poolside Cafe.

With his national tour, Kavin Jay hopes to expand and invigorate the comedy scene here in Malaysia with his unique blend of comedic timing, personal escapades and ruthless complaints.

“We’re thrilled to see the immense number of positive reviews of Kavin’s Netflix special from viewers and media portals especially in North America and Europe. Kavin’s funny stories may be set in Malaysia but he has made it relevant to audiences globally. We hope the next generation of comics continue to keep global in mind when creating content,” expressed Manisha Jagan, Managing Director of MTalent Asia.

Malaysian comedy fans can start gearing up to watch the man voted as the nation’s grumpiest comedian live in their city. To enjoy early bird prices on tickets, head on to ​www.tgv.com.my​ now.

About MTalent Asia
MTalent Asia is a boutique agency founded in late 2014 to represent and build careers of independent talents and performing artists. Since then, MTalent Asia has ventured into the realms of public relations, influencer engagement, digital marketing, production and more.

With a unique understanding of the needs of both talents and brands, MTalent Asia provides signature services for both ends customized with care and personalization. They aim to provide world class service to diverse brands similarly as how their rockstar talents would be treated in their respective fields.

About TGV Cinemas Sdn Bhd
TGV Cinemas has been entertaining moviegoers in Malaysia since 1994. To date, TGV has a presence in 34 locations throughout Malaysia hosting 270 screens and over 45,000 seats.

We are the first multiplex in Malaysia and the only one to host the ever immersive IMAX® cinematic experience. Our mission is to make people happy by creating memorable experiences through our products, services, and core values. 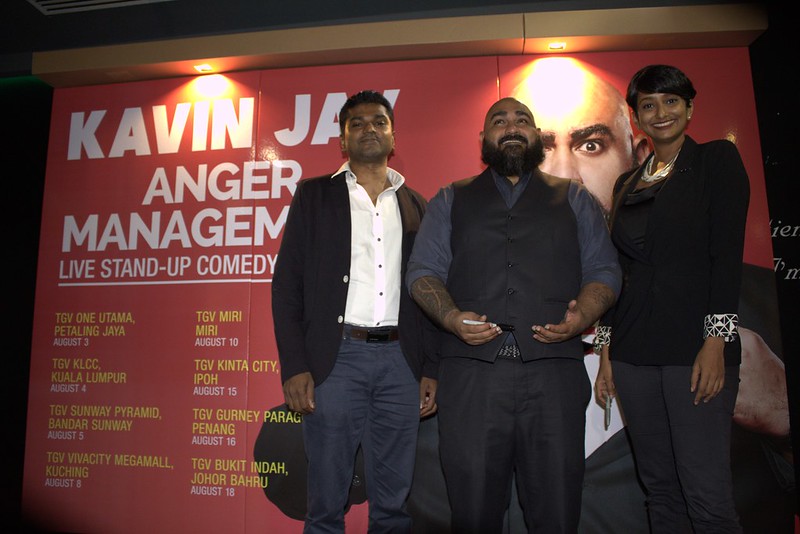 About SOCAR Malaysia
SOCAR Malaysia is a car-sharing startup that aims to change the landscape of Malaysian transportation by bringing in a new era of multiflex mobility. SOCAR Malaysia is the company’s first overseas expansion and over the next 6 months, the company aims to grow their fleet to over a 1,000 cars and bring the convenience and joy of car-sharing to hundreds of thousands of members across Malaysia. 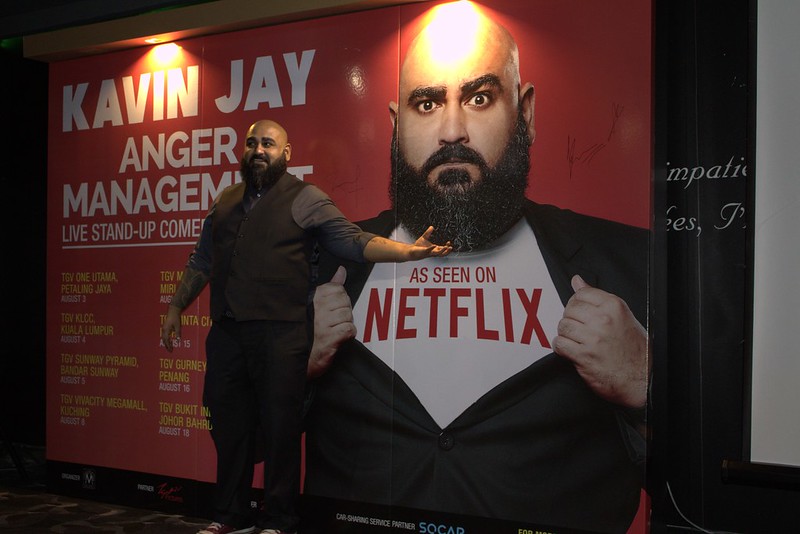