When Bingeing Goes Public, Private Behaviors are Exposed and Social Norms are Shelved
New survey data from Netflix reveals Malaysia as one of the top 5 countries globally to watch their favourite shows in public 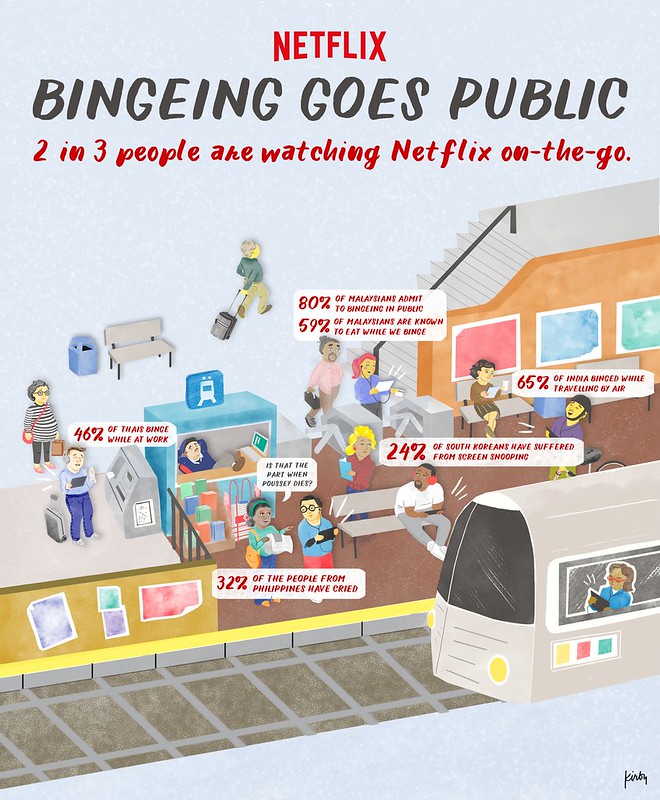 In a world with 2.4 billion smartphone1 users, mobile viewing is on the rise and “binge-free zones” are a thing of the past. But as millions of people take full advantage of Netflix to stream and download anytime and anywhere, and with Malaysians amongst the top Netflix mobile downloaders around the world, private binge behaviors are now on public display. Don’t believe us? 80% of Malaysians were found guilty of this habit while 88% of the people in India have admitted to bingeing in public. 86% of Filipinos and Thais nodded when we asked them. Taiwan and South Korea are public binge watchers too; both at 75% and 70% respectively. Compared to the global average of 67%, we’re way ahead of the game. 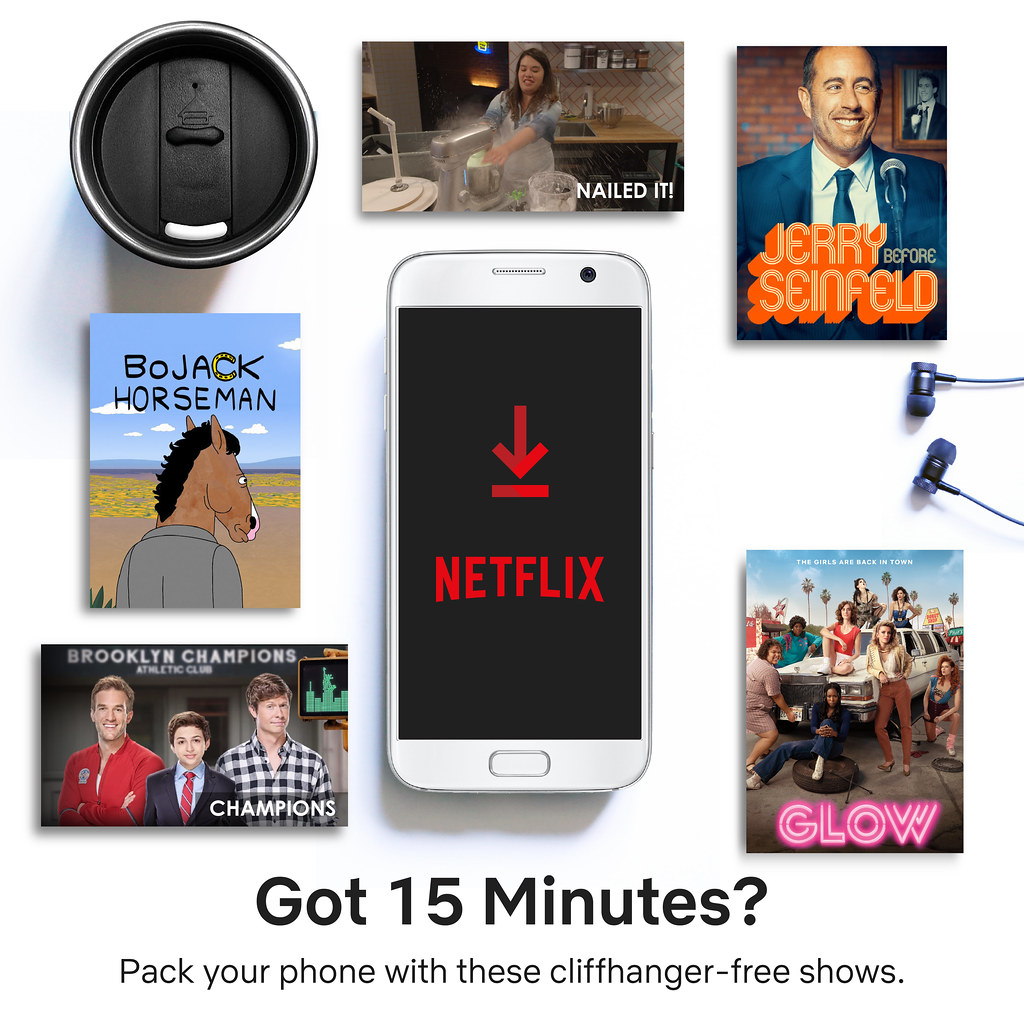 So why are people globally willing to expose their entertainment emotions to watch outside their homes? Because public bingers rank having access to movies or shows higher than food and water as “essential” items for travelling or commuting2. Just be prepared that streaming Stranger Things while surrounded by strangers is making social norms go upside down. And catching someone snooping on your screen during a risque scene or LOL’ing on a crowded train is the new normal.

If you worry about judgy eyes when you whip your phone out to tap on the Netflix app and pick a show to watch, you need to SNAP out of it? Why? Because you’re not alone!

If your ride only takes 15 minutes, you need to check these shows out!

If it takes that dreaded hour, these shows will keep you entertained.

If you’re on a flight to some gorgeous place (lucky you!), these will keep you on your toes for hours!

We Binge Anytime, Anywhere (And We’re Not Ashamed Of It)
What does Malaysia and Thailand have in common? Our love for food. So it comes as no surprise that 59% of Malaysians and 58% of Thais binge while we eat. Not only that, our neighbour up north cannot seem to stop bingeing even while at work (46%) and they even do so on their daily commute (61%). Although to be fair, South Korea does it too (62%). But the kings and queens of public bingers are from India, who shows no sign of slowing down, as they’ve been known to binge EVERYWHERE, but especially while travelling either by air (65%) or bus (58%).

We’re Being Watched While We’re Watching
Nearly half (45%) of those watching on the go have caught a backseat binger snooping on their screen. But there’s no reason to call Chief Hopper – only 18% of public bingers have felt embarrassed about what they’re watching and 77% refuse to turn off their show or movie. There’s no shame in our stream game.

We’re Spoiling Shows for Screen Snoopers (Sorry!)
Screen snooping can have real consequences! Eleven percent of public bingers have had a show or movie spoiled by seeing someone else’s screen. The risk is even greater if you plan to sneak a peak in South Korea where 24% have suffered from spoilers.

We’re Being Interrupted By Strangers
More than a quarter (27%) of public bingers have had a stranger interrupt their show or movie to start a conversation about what they’re watching. In India, that number nearly doubles (50%)! But that doesn’t mean we have to pull a Kingpin. Episode intruders are likely just jealous we remembered to download our shows before leaving the house.

We Wear Our Shows On Our Sleeves
No matter how meticulously we curate our lives on social media, there’s no filter for laughter or tears in real life. The majority of public bingers have laughed out loud and one in five have even cried while watching in public. Globally, Mexico, Colombia and Chile are the most outwardly emotional countries. However, Philippines (32%) and India (26%) seem to shed tears while watching theirs shows in public too.

Ultimately, a spoiled show or a steamy scene streamed with a stranger is worth the awkwardness if it means we get to keep watching what we love. So next time you’re packing your bags, don’t forget to pack your favorite binge, too. 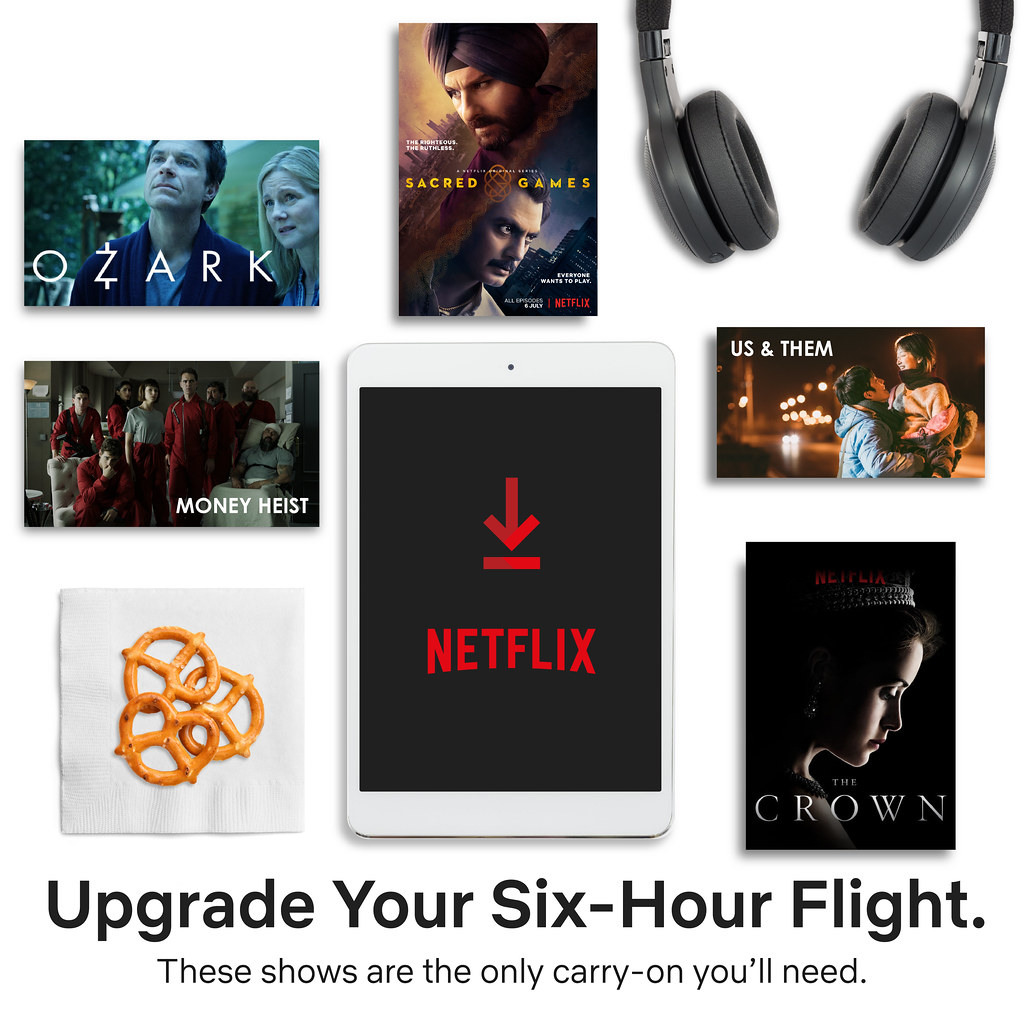 METHODOLOGY
*The survey was conducted by SurveyMonkey from August 24 – September 7, 2017 and based on 37,056 responses. The sample was balanced by age and gender and representative of an adult online population who watch movies and TV shows via streaming services in public settings in The United States, Argentina, Australia, Brazil, Canada, Chile, Colombia, France, Germany, India, Italy, Malaysia, Mexico, Netherlands, Philippines, Poland, South Korea, Spain, Sweden, Taiwan, Thailand and Turkey.

1 An estimated 2.4bn people will use a smartphone this year, an increase of 10.8 per cent, according to eMarketer’s latest forecast.

2 When asked to rank travel or commuting “essentials” public bingers globally listed “access to movies and tv shows” higher than food and beverages. (30% versus 25% and 23%, respectively). 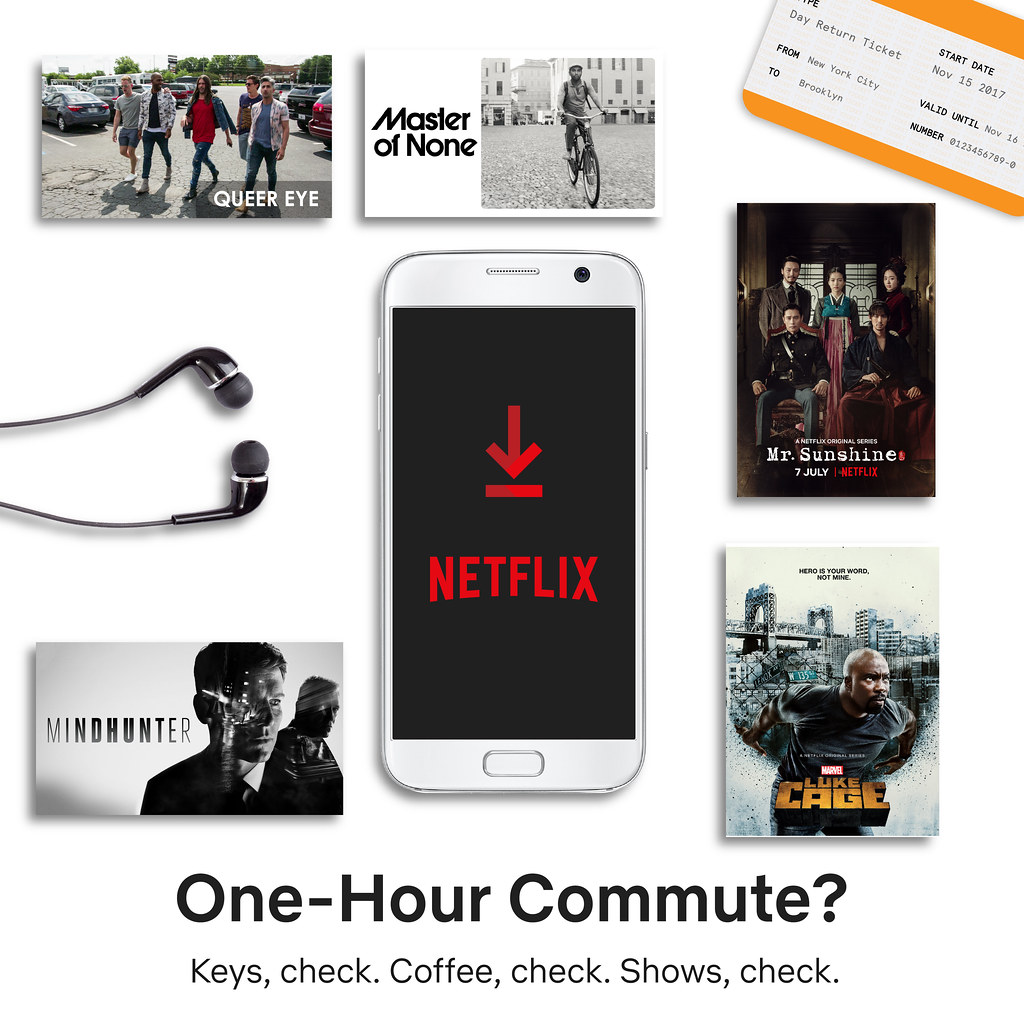 ABOUT NETFLIX
Netflix is the world’s leading internet entertainment service with 125 million memberships in over 190 countries enjoying TV series, documentaries and feature films across a wide variety of genres and languages. Members can watch as much as they want, anytime, anywhere, on any internet-connected screen. Members can play, pause and resume watching, all without commercials or commitments.