Global superstar Bruno Mars has teamed up with GRAMMY-nominated breakout hip-hop star Cardi B for a brand new remix of “Finesse,” from Mars’ GRAMMY-nominated blockbuster third album, 24K MAGIC. The remix is now available at all DSPs, with the high-energy companion video now streaming here.

Mars rounded out an all-star year with six total GRAMMY nominations, including recognition in the ‘Big Three’ with 24K MAGIC (Album of the Year), the album’s title track (Record of the Year), and “That’s What I Like” (Song of the Year). Mars also received three nominations in the R&B category, including Best R&B Performance and Best R&B Song for “That’s What I Like,” and Best R&B Album for 24K MAGIC. The 60th Annual GRAMMY Awards will air January 28th on CBS. 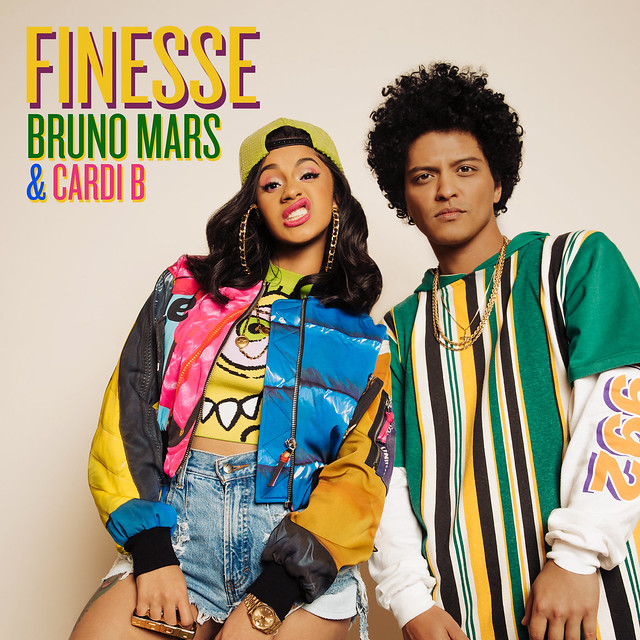 ABOUT BRUNO MARS
Five-time GRAMMY Award winner and 27-time GRAMMY Award nominee Bruno Mars is a celebrated singer, songwriter, producer, and musician who has sold more than 180 million singles worldwide, making him one of the best-selling artists of all time. Recently, his critically acclaimed and RIAA certified double-platinum album 24K Magic marked his highest first week sales debut, remaining in the Top 10 on the Billboard 200 for an impressive 44 consecutive weeks. The lead hit single “24K Magic” is certified four times Platinum by the RIAA. Mars’ six-time platinum certified single “That’s What I Like” recently climbed to No. 1 on the Billboard Hot 100, marking his seventh Hot 100 chart-topper and his first No. 1 on the Hot R&B Songs chart, where it remained at the top-spot for 19 consecutive weeks.
Mars is the first artist to have two songs spend 24 or more weeks in the Hot 100’s Top 5 (“That’s What I Like” and “Uptown Funk”). He is the only artist in the past year to have both a four-time and six-time platinum single from the same album. Also, Mars is one of the few artists to have written and produced all of his No. 1 hits and has had a No. 1 song on the Hot 100 from each of his first three studio albums.
With seven Hot 100 No. 1’s, Mars is ranked No. 1 among male artists with the most Hot 100 No. 1s for this decade, extending his lead over Justin Bieber, Drake, Eminem, and The Weeknd. Mars has been traveling the globe on his massive 24K Magic World Tour, which sold more than 1 million tickets in a single day. In 2015, Bruno dominated music charts with the hit single “Uptown Funk,” which took home three GRAMMY Awards, including Record of the Year.

ABOUT CARDI B
GRAMMY nominated rap superstar Cardi B rounds out an all-star 2017 by releasing her next smash single, “Bartier Cardi” featuring 21 Savage. While Cardi is currently featured on several hit tracks – G-eazy’s “No Limit” ft. A$AP Rocky, Migos’ “Motorsport” ft. Nicki Minaj, and Ozuna’s “La Modelo” – “Bartier Cardi” marks the rapper’s official second single release follow up to this year’s breakthrough smash “Bodak Yellow.” Cardi B has recently been named as the third act – alongside The Beatles and Ashanti – and first rapper to have her first three entries in the Billboard Hot 100’s top 10 simultaneously.

“Bodak Yellow,” which is now certified TRIPLE platinum, had an astronomical rise this year – earning the coveted #1 spot on Billboard’s Hot 100 chart for five consecutive weeks, making Cardi B the first female rapper to reach #1 without any accompanying acts since Lauryn Hill in 1998. Cardi B and “Bodak Yellow” have been featured on several “Best Of” lists including, Rolling Stone, New York Times, Washington Post, Time, Billboard and Vanity Fair, to name a few. Cardi was also recently named on of Forbes “30 Under 30.”

Cardi B has also made appearances on The Tonight Show starring Jimmy Fallon to perform “No Limit” alongside G-eazy. Recently, Cardi returned to The Tonight Show for her first late night interview.