A sultry, lipstick-wearing Sir Richard Branson finally earned his stripes as AirAsia’s flight attendant today, when he honoured his friendly wager on board AirAsia X’s D7 237 from Perth to Kuala Lumpur.

The Virgin Group founder and chairman shaved his legs, slipped into a sexy red skirt and took to the skies today (Sunday) as a female flight attendant on a special AirAsia X charity flight which departed Perth this morning. 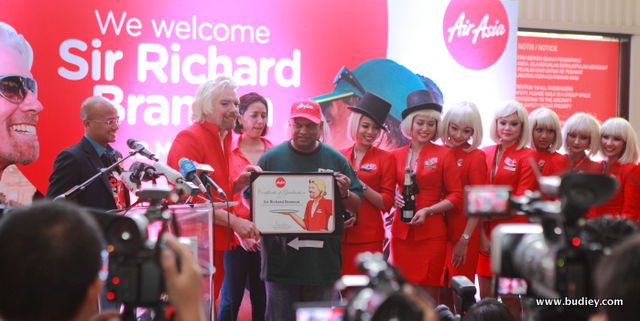 The flamboyant entrepreneur spent the five and half hour journey pouring coffee or tea, serving meals, distributing goodies, entertaining and making in-flight announcements for the lucky guests and international media on the flight which helped to raise money for the Starlight Children’s Foundation.

Sir Richard and Mr Fernandes had wagered on which one of their Formula One racing teams would finish ahead of each other in their debut season of the 2010 Formula One Grand Prix in Abu Dhabi, and that the loser would serve as a female flight attendant on board the winner’s airline.

“He is an entrepreneur, visionary, knight and adventurer, Sir Richard can now also add AirAsia flight attendant to his long list of credentials. Sir Richard graduated as a member of the AirAsia cabin crew with flying colours and he performed all his in-flight duties with his usual good-humour and enthusiasm. Sir Richard is truly a great sport and AirAsia is pleased to be able to contribute to those in need through this charity flight.”

“This has been a real first for me but I have enjoyed the experience and I have nothing but respect for what our fabulous flight attendants do every day to keep us safe.”

“I am also grateful to have had Tony, whom I lost the bet to, willingly help me out on the flight. I trust we kept the passengers well fed and amused. It was a lot of fun. I’ve always said I’m a man of my word and I’m happy to have finally honoured the bet and contributed to a great charity along the way.”

AirAsia X will be contributing AUD$100 from each seat sold to the Starlight Children’s Foundation in Australia.

The airline will also donate 10% of all inflight sales including duty free merchandise sold on board the flight to the foundation. AirAsia BIG loyalty program will also play a part by running a “Tweet2Donate BIG” social media campaign with the aim to garner 1 million BIG points from its members, equivalent to MYR10,000 (AUD3200*) to be channelled to the charity foundation.

AirAsia X estimates to raise over AUD200, 000 from the activities carried out during the cocktail and in-flight today.

The Starlight Children Foundation was established in Australia 1988 and this year celebrating its 25th year, Starlight is dedicated to brightening the lives of seriously ill and hospitalised children, and their families, around the country.

In preparation for his new role, Sir Richard had his legs publicly shaved during a cocktail event in Perth last night (Saturday) which was attended by members of the Starlight Children’s Foundation, travel industry representatives and community including business leaders, and members of the media. Other activities were also carried out throughout the evening to further raise funds for the foundation.

The fanfare ended at the Low Cost Carrier terminal in Kuala Lumpur where a brief graduation ceremony took place for Branson. Tony Fernandes, Group CEO of AirAsia had the honour of handing over the AirAsia cabin crew graduation certificate along with the AirAsia crew uniform and shoes to Sir Richard as part of the airlines gratitude to him for being a good sport.

Azran Osman-Rani, CEO of AirAsia X said, “Aviation history has been made and the memory will definitely last a life time! Watching Branson serving Tony as a flight attendant on board AirAsia X’s flight was indeed hilarious knowing that the former was Tony’s mentor in the past. Justice has now been served for the both of them and what’s more X-citing is the fact that both share similar values in character; determination, grit and passion in what they do.”

“This also proves that anything is possible when you set your heart to it and doing it for a good cause gives it a more meaningful feel. We hope that our contribution would further improve the lives of the children of the Starlight Foundation,” concluded Azran.

AirAsia X together with the AirAsia Group, the leading and largest low-cost carrier in Asia, services the region’s most extensive network with over 85 destinations across 20 countries.

It is noteworthy to highlight that the compression top, cabin crew uniform and shoes worn by Branson was sponsored by the following companies:
Compression Top- HPE Clothing, incorporating HPE’s intelligent compression FRESHFIT ® fabric, the compression top uniforms are engineered to regulate blood flow, body temperature and muscular fatigue to combat the high levels of stress placed on the body whilst flying. 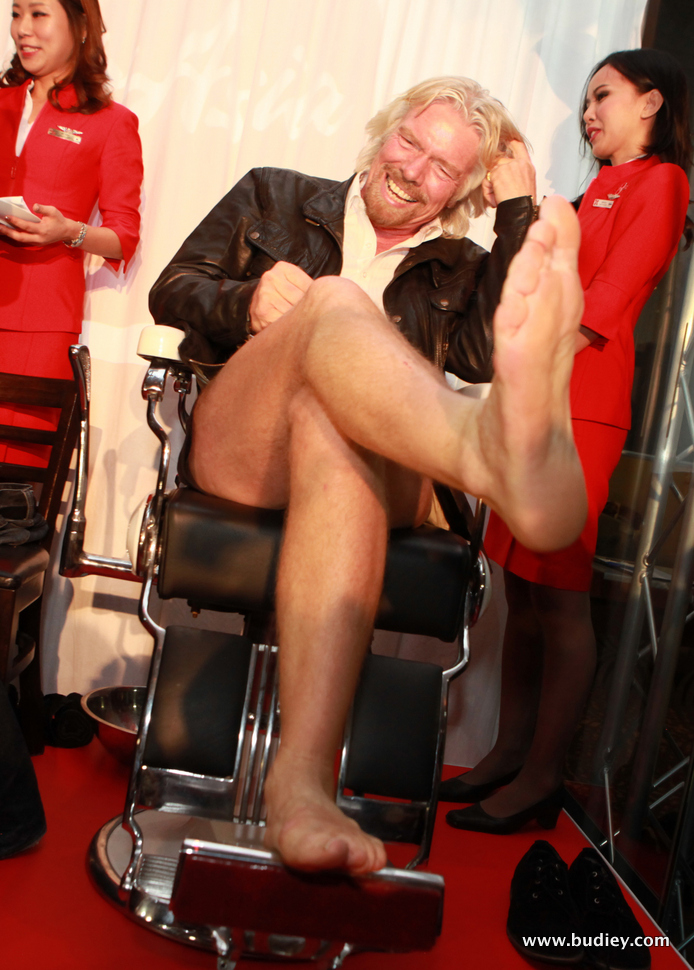 Sir Richard Branson, Chairman & Founder Virgin Group getting ready to shave of at the charity cocktail on 11 May 2013 in Perth, Australia. 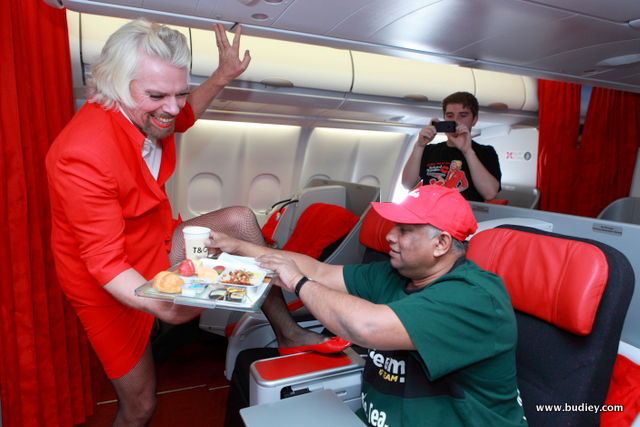