School’s out and it’s time to enjoy the ‘Best Day Ever’ at Sunway Lagoon. Forget packed schedules filled with tuition classes, upcoming exams, assignment deadlines, and head down to Asia’s leading family-fun destination to enjoy 8-feet waves, bungee jumping, and a host of thrilling rides.

Spend the upcoming March school holidays among pirates and sailors at Sunway Lagoon with its promotional packages, FamFUN that includes 2 Adult and 2 Children passes, and 4-To-Go that consists of 4 Adult passes, costing RM 390 and RM 456 respectively. 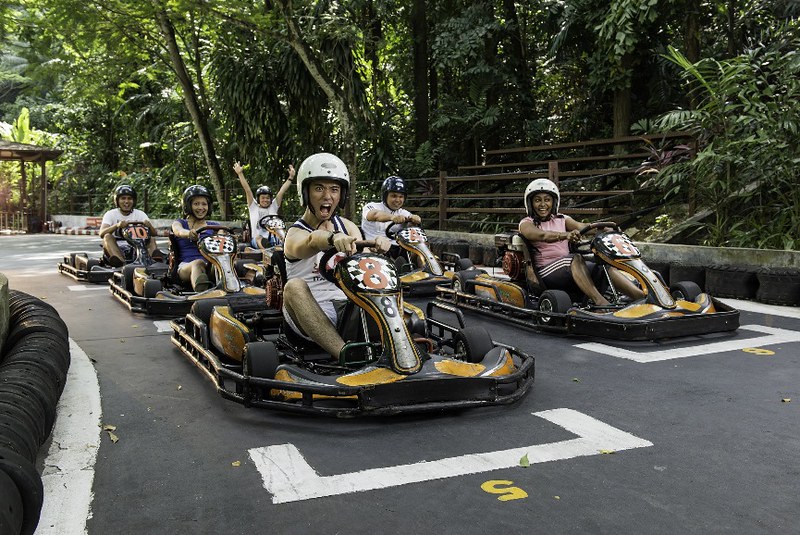 Sunway Lagoon’s latest instalment is 10-acres of lush tropical rainforest situated within a jungle previously “lost” to the public. This sanctuary holds a plethora of rides and attractions from geysers, water cannons, waterfalls, multiple water slides, to a magical moment where the park turns green with slime during the magical ‘Slime Deludge’.

From the 12th of March till the 20th of March Sunway Lagoon will be renewed to a marvellous pirate city as all performances, parades, and marching bands across the day will take on a ‘Pirates and Sailors’ theme.

Lie on the sand and enjoy the sound of waves at the World’s Largest Man-made Sandy Surf Beach that offers a wide range of activities from Beach Volleyball to riding waves from 3pm to 3:30pm.

Tall waves aren’t the only challenge in-store for young dare-devils, Sunway Lagoon’s Extreme Park provides the highest, longest, and fastest thrills that leave thrill seekers wanting more. Defy gravity at lightning speeds with Asia’s Highest and Fastest Slingshot Ride, the G-Force X that takes unsuspecting thrill seekers from 0 km to 120 km in a mere 2 seconds to 65 metres in height. Glide through the air with Sunway Lagoon’s Flying Fox, one of Malaysia’s Longest trail at 206 metres and take the ultimate dive with the Bungy Jump.

Enter a World of Adventure filled with excitement and wonder with fast and thrilling rides such as the Lost City of Gold Scream Coaster, and see the world turned upside down in Malaysia’s first and only 360-degree rotating ship, Pirate’s Revenge. Enjoy a bird’s eye view of Sunway Lagoon Pedestrian Suspension Bridge, one of Malaysia’s Longest Suspension bridges.

Take a walk on the wild side where cowboys patrol the streets at the Wild Wild West. Among the attractions is one featured in the Malaysian Book of Records, the Grand Canyon River Rapids, and others that are not to be missed, such as Alamo, Bush Cassidy Trail, Colorado Splash, and Vultures.

As the day gives way to the night, relive every nightmare at Lynton V Harris’ Scream Park. Experience a terrifying and exhilarating journey as Sunway Lagoon combines audio and visual technology, special effects, different themes, along with a fully trained cast of live actors in cool character costumes, and world class make-up that is sure to bring the deepest fears of visitors to life.

“With the school holidays around the corner, Sunway Lagoon is excited to welcome students and their families to enjoy the many parks we have. The introduction of Asia’s first Nickelodeon themed land, Nickelodeon Lost Lagoon, has made us the perfect tourist destination for all ages. On top of the existing rides and attractions that we currently have within our six signature parks, visitors will definitely be rewarded more for less during this school holidays as there will be a line-up of various fun and entertaining activities for families and friends to spend quality time together throughout the day,” said Sean Choo, General Manager of Sunway Lagoon.

This multi-award winning park is a family-fun destination with attractions and rides for all ages. Equipped with over 80 rides and a host of mind-blowing attractions such as the World’s Largest Water Ride, The Vuvuzela, the World’s First Waterplexx 5D Adventure, and six signature parks, the Water Park, Extreme Park, Wildlife Park, Amusement Park, Scream Park and Nickelodeon Lost Lagoon it is the place to be this coming school holidays.

Experience the Best Day Ever at Sunway Lagoon as a family or a group of friends with promotional packages that also include meal and retail vouchers. Purchase the packages online and redeem them during your school holidays from either 12th to 19th March, 28th May to 12th June, and 10th to 18th September. *Prices are inclusive of GST.

About Nickelodeon Lost Lagoon
Asia’s First Nickelodeon Themed Land – the Nickelodeon Lost Lagoon is a new park which spans 10 acres amongst lush greenery and stone hills, offers 14 new exciting rides that cater for all ages. Among the attractions are the Splish Splash, Primeval, Jungle Fury, Monsoon 360, Kubarango and more! Park goers can expect an exhilarating experience during the “Great Slime Deluge” happening daily at SpongeBob Splash Adventure. Create a moment for your kids when they get to snap a photo with their favourite Nickelodeon characters such as SpongeBob SquarePants, Dora the Explorer, and the Teenage Mutant Ninja Turtles during the “Meet & Greet” session every day at Lagoona Terrace.