HP today gave away travel and shopping vouchers totaling RM50, 000 to winners of the “HP Holiday With Elves Contest”, which was organized in conjunction with HP’s Christmas celebration campaign in 2009. 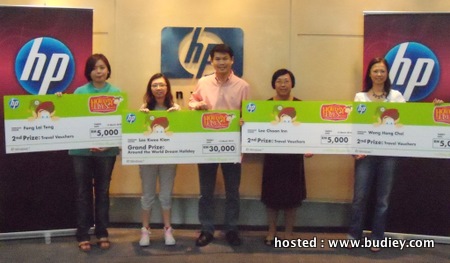 The month-long contest, which was held from 27 November 2009 to 31 December 2009, saw overwhelming response from HP consumers nationwide. Designed to reward HP customers for their loyal support, the contest attracted more than 120 entries, culminating with one Grand Prize winner; three secondary prize winners; and 10 consolation prize winners.

Danny Lee, Country General Manager, Personal Systems Group, HP Malaysia, who was present at the ceremony to give away the prizes said, “Christmas is a special celebration of giving and in the spirit of gift-giving, HP is more than delighted to give away dream holidays (among other prizes) to our winners. Today’s event is just one of our ways to thank our loyal consumers for their continuous support, without which, HP could not have achieved the success and achievements here in Malaysia,” said Danny Lee.

He also added, “We received tremendous response for the contest and this is undoubtedly a huge encouragement for us at HP to develop more engaging programs to reward loyal customers in the future just as we are dedicated to creating innovative, stylish and affordable products for our consumers.”

Lee Kwee Kian emerged as the grand prize winner of the “HP Holiday With Elves Contest” and won herself travel vouchers to a dream holiday worth RM30, 000. The 27-year-old finance assistant from Johor Bahru had earlier purchased a Compaq Presario CQ40 notebook PC for her personal use, and decided to participate in the ongoing contest. With the purchase of her very first notebook PC, her first win in any contest and as the grand prize winner had most certainly come as a surprise.

“All my effort spent in two weeks to count the number of elves in the flyer has finally paid off! This is such a huge surprise and I still can’t believe I have won the grand prize! This would be my first family trip and Korea has always been my ideal holiday destination. I would like to thank HP for this opportunity and I couldn’t be more pleased to have chose HP for my first notebook!”said Kwee Kian, who plans to travel to Korea with her family and friends. 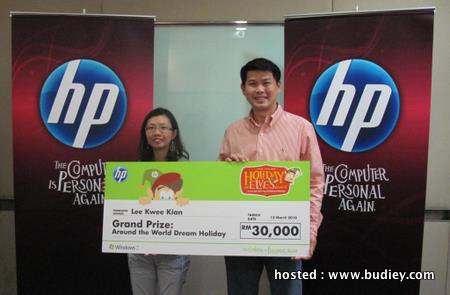 Customers stood a chance to participate in the “HP Holiday With Elves Contest” simply by purchasing any HP desktop PCs or notebook PCs of the HP ENVY series, HP Pavilion series, Compaq Presario series or HP Mini series which have been preloaded with Genuine Windows® 7.

Customers would then have to count the number of Elves in the contest form, sign off ‘HP Elf’ in the most creative way, and submit their entry with proof-of-purchase via email, fax or post.

Alternatively, consumers could sign-up as a Facebook Fan of HP “The Computer is Personal Again” and count all the elves on the screen to stand a chance of winning a brand-new HP Mini 311 worth RM1, 799.