Priest In The Running To Win RM500,000 In Shell’s Cash Contest

With Shell, anyone can be a winner. This became a reality for Chanthiran a/l Velaiutham, a Priest from Kajang, when he became the first weekly grand prize winner, receiving a prize purse of RM20,000 in Shell’s latest cash contest – Pump and Stand to Win RM500,000. Chanthiran will now stand the chance to win the coveted RM500,000 cash!

Grinning from ear to ear, Chanthiran said, “This grand prize win of RM20,000, I believe, is indeed because of God’s grace. As a priest, my responsibilities lie with the underprivileged community in the area. Finding funds to feed and clothe them is a constant challenge I face. With the win of RM20,000, together with my church parishioners will be able to do a lot of good for the community. On the recipients of this windfall, I will ask my church members to decide to whom and how they want to spend the money.” 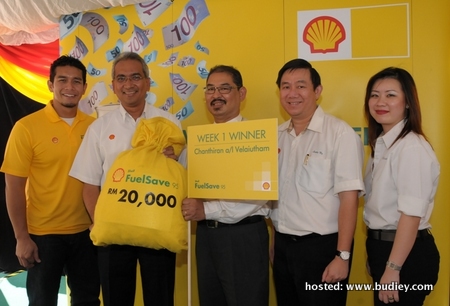 By the end of this campaign, which started from 7 September until 15 November 2011, Shell will be giving away cash prizes to a total of10,060 winners. Each week, RM20,000 will be awarded to one lucky grand prize winner; RM2,000 to five lucky winners and RM100 consolation prize to 1000 customers. At the end of the 10-week Contest, all weekly grand prize winners will have the opportunity to win up to RM500,000!

“At Shell, we believe in rewarding all of our loyal customers regardless of which products of ours is purchased. In promoting our fuels, Shell has also built for ourselves, a reputation for offering exciting contests. By the end of November, we would have rewarded 23,624 Malaysians for simply filling up with Shell. The Shell Pump and Stand to Win RM500,000 is offering our largest prize purse of RM500,000 to motorists nationwide,” said Encik Azman Ismail, Managing Director of Shell Malaysia Trading Sdn Bhd and Shell Timur Sdn Bhd.

Chanthiran as the first winner of the Shell Pump and Stand to Win RM500,000 contest at a winner’s celebration event hosted by Encik Azman Ismail and witnessed by Encik Fahrin Ahmad, Shell FuelSave 95 Ambassador. The event also saw a performance by the 1 Malaysia Drum Symphony. 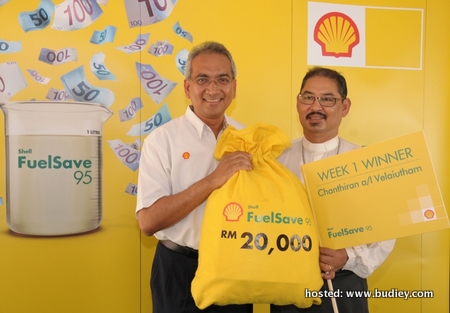  Shell Malaysia
In line with its commitment to encouraging fuel efficient motorists and how it can lead to more Ringgit savings in their pockets, Shell will also be holding the first ever Shell FuelSave Day on 15 October 2011 at the 1 Utama Shopping Centre (old wing car park). Poised to create a Guinness World Record, Shell FuelSave Day will be the largest ever fuel efficiency training held simultaneously in 10 countries across Asia and Europe. For information on the contest & how to be fuel efficient, please go to the nearest Shell station or log on to www.shell.com.my/fuelsave

About Shell
Shell is a world leading energy company whose Downstream (oil products) business has pioneered numerous advances in fuels and lubricants technology and offers motorists one of the widest choices of petroleum products and services. Shell is the world’s largest fuels retail business with over 46,000 retail stations in more than 90 countries and Malaysia is a key growth market. Shell is the official sponsor and technical partner of the Ferrari Formula One team and the Ducati World MotoGP team.

About Shell Pump and Stand to Win RM500,000 Contest
To stand a chance to become a weekly winner, motorists would need to:
1. Pump a minimum of RM30 of any Shell fuel, lubricants or Shell Select items
2. Fill up a contest form and answer a simple question at the back of the form;
3. Drop the contest form in the contest box at any of our Shell stations nationwide, with the purchase receipt attached.