This year’s KCAs featured a new design – dual stages, a 360 degree mosh pit, a slime fountain delivering winner envelopes and a slime river snaking throughout the venue. Kicking off the star-studded celebration was internet sensation Todrick Hall with a pop performance medley featuring celeb cameos by Pharrell Williams, Austin Mahone and Cody Simpson, along with aerialists, cheerleaders and a step team. Celebrated magician David Blaine made his live awards show debut tonight by facing his greatest challenge ever – slime – in an unforgettable moment that literally knocked his head off. 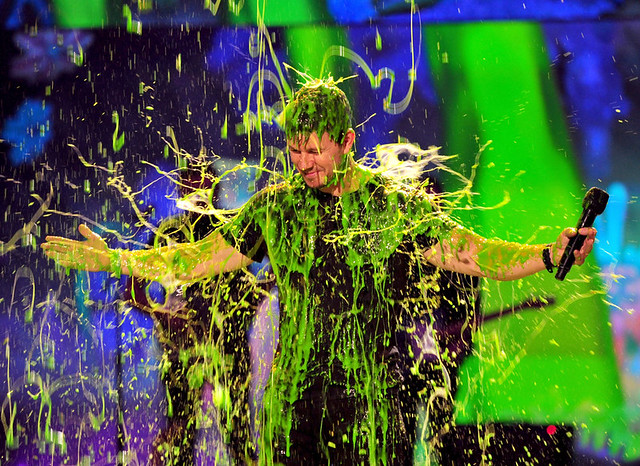 [pullquote]New to this year’s telecast, kids and families were able to influence multiple slimings in the live show. In the pre-show vote for a daring slime stunt, they chose the Slime Rodeo, an attempt to harness the power of slime in a new way — by riding it. Hosted by Olympic gold medalist Shaun White, Dave England bested fellow daredevil, Jukka Hilden, by staying on his bucking slime-horse hose the longest. In a special live vote during the show, kids spoke up and declared both Cody Simpson and Austin Mahone slime-worthy.[/pullquote]

[pullquote]Wahlberg maintained throughout the show that he would be an unslimeable host, a challenge that was put to the test against worthy opponents like Williams, Kaley Cuoco and Jack Reynor — all of whom got doused themselves in green goo. Ultimately, not even Optimus Prime could save Wahlberg from the massive drenching delivered by none other than Kevin Hart and the host’s own kids.[/pullquote]

Top-selling recording artist Aloe Blacc took the stage with a medley of his hit songs, “Wake Me Up” and newest single “The Man,” while Brooklyn-based rock group American Authors closed the night with a multi-colored neon slime-filled performance of their #1 smash, “Best Day of My Life.”

Kids and families paid tribute to their favorites by casting votes in 23 categories, from 24 February – 29 March, including the newly introduced Favorite Funny Star, Favorite Animated Animal Sidekick, and Most Enthusiastic Athlete. Fans were able to vote for their favorites across all of Nickelodeon’s digital outlets: kca2014.com desktops and mobile devices, as well as Nickelodeon’s Twitter feed using custom KCA hashtags.

Singer G.E.M. from China clinched the Favorite Asian Act award and she said, “I’m very honoured to win Favorite Asian Act for the Kids’ Choice Awards! It means a lot to me to receive this award. Thank you Nickelodeon and thank you to all the fans, including my young friends who voted for me. You guys are the best and this award belongs to you!”

Leading into the awards, special guest correspondents Jeff Sutphen, Instant Mom’s Sydney Park and See Dad Run’s Ryan Newman captured all the orange carpet activities in a live webcast and the Emmy-winning Nick App. In addition to a performance by pop star Austin Mahone of his new single “Mmm Yeah,” the orange carpet featured a giant Venus “Slime” Trap, a talking zebra and a slime swing suspended over an oozing green moat. Kids also got to see celebrities getting silly in the GIF booth, while a Vine 360 booth showcased everyone’s fashionable outfits from every angle.

Nickelodeon upped the digital presence of the 27th Annual Kids’ Choice Awards, offering cross-platform interactive experiences before, during and after the big show on Nickelodeon websites, Twitter, Facebook, and mobile and iOS devices. This year’s ceremony brought together the on-air and online experience closer than ever before, allowing kids and families everywhere to be a part of the night’s festivities. Exclusive Nick cameras offered multiple viewing angles and were featured alongside interactive polls, real-time updates and photos from the orange carpet and backstage. Coverage during the event included a live companion stream backstage, and interviews during the main show. Fans can relive their favorite show moments by watching video highlights from the live show, flipping through orange carpet, live event and performance photos and read through recaps. The app and website feature clips and photos from past Nickelodeon Kids’ Choice Awards shows, along with promotional spots, dedicated information pages on Wahlberg and nominees, a KCA news blog, trivia, personality quizzes and new KCA-themed online games. 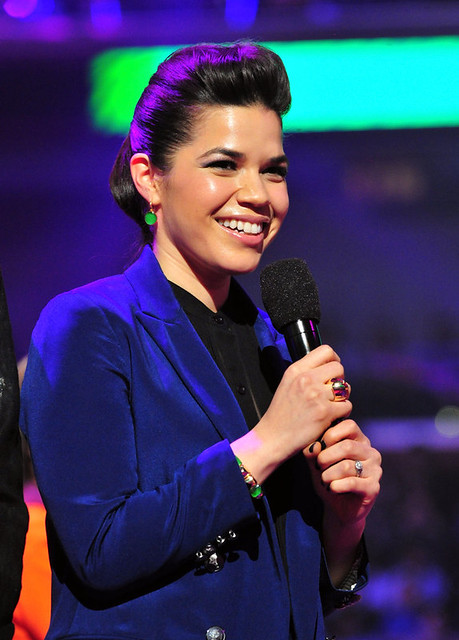 Replays of Nickelodeon’s 27th Annual Kids’ Choice Awards will air on Nickelodeon at the following timings: 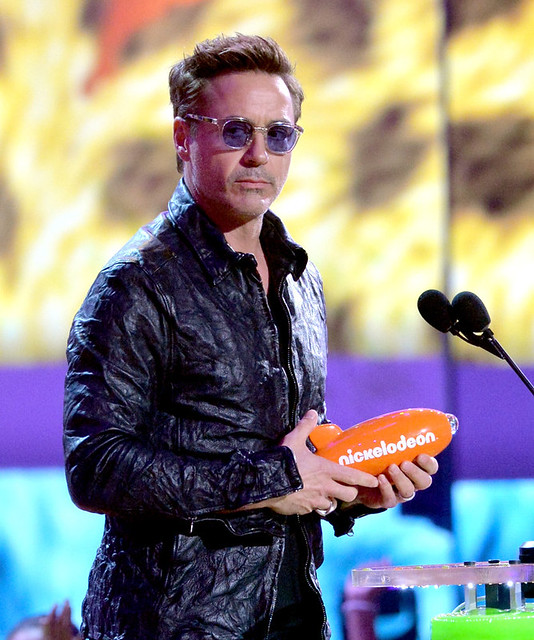 Favorite Voice from an Animated Movie

“Story of My Life”(One Direction)

Diary of a Wimpy Kid series

The 2014 Nickelodeon’s Kids’ Choice Awards will be seen in more than 375 million households around the world and in more than 25 languages. Within hours of airing live in the United States and Canada, the show will roll out internationally, providing kids around the world the opportunity to tune into their local Nickelodeon channel to enjoy the show faster than ever. In many international markets, the 2014 KCAs will feature country-specific award categories and nominees, such as Sveriges Favoritstjärna (Favorite Swedish Star) and Migliore Cantante Italiano (Favorite Italian Singer). Voting for the 2014 KCAs will span six continents across 17 localized voting sites, giving kids practically everywhere the chance to decide who takes home a coveted blimp. The 2013 KCAs was the highest-rated ever among kids in many international markets, including the UK, Germany and Singapore. Ratings for the 2013 KCAs were up double-digits YOY internationally, and the show was rated #1 in its timeslot among kids’ channels in key international markets, including the UK, Australia, Netherlands, Spain, Singapore, and more. 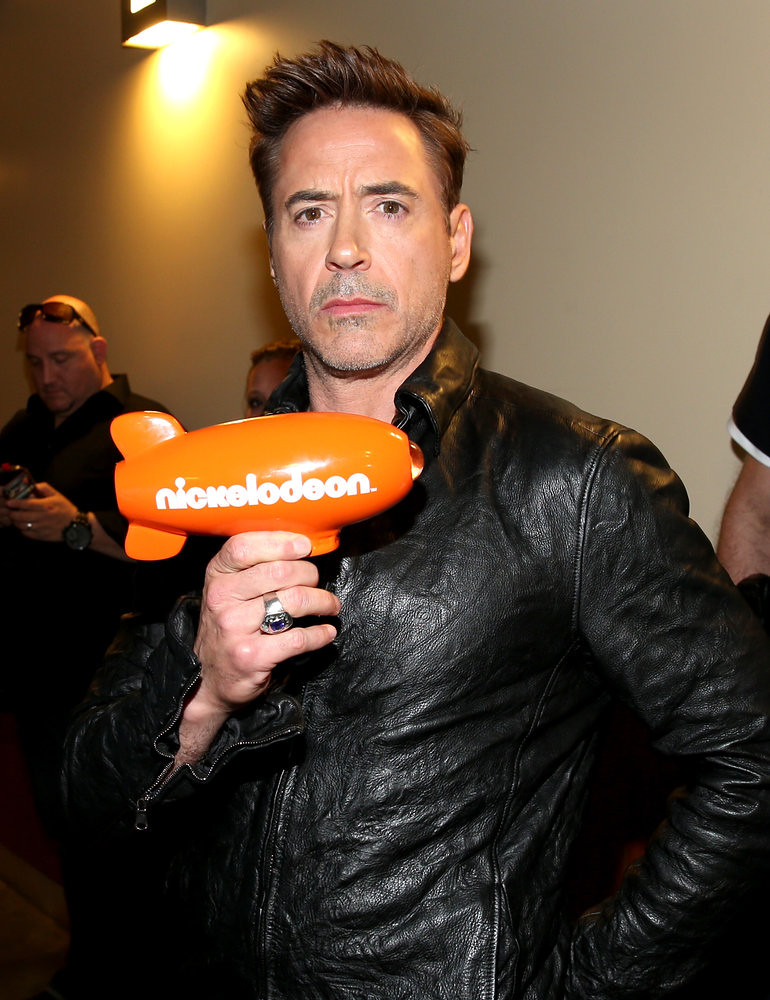