The former premier flew on AirAsia X flight D7 2006, which departed Kuala Lumpur for London at 9:10 am (local Malaysia time) and will be touching down in Stansted, UK later at 3:55 pm (local UK time) today.

Tun Dr. Mahathir, widely regarded as the father of modern Malaysia, has been instrumental in the success of Malaysia as a travel and tourism hub. AirAsia was given the right by Tun Dr. Mahathir to start operating low-cost flights in 2001. Since then, AirAsia has grown from a fledgling Malaysian low-cost airline into the world’s best low-cost airline today. Low-cost long-haul affiliate AirAsia X, launched in 2007, has recently reached its mark of having flown over 5 million guests in a short span of less than 4 years. Together, AirAsia and AirAsia X have flown more than 120 million guests to date.

The former premier has also visited AirAsia’s offices and the AirAsia Academy, where he experienced a simulated flight at the state-of-the-art training center in March this year. 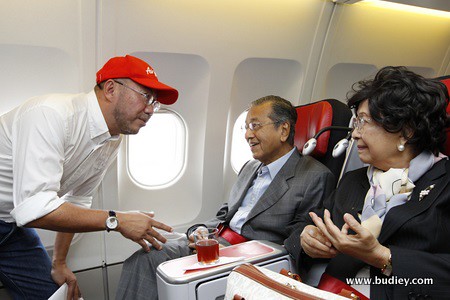