The 2nd Asian Corporate Director Recognition Award recognizes Tony’s contributions in enhancing business ethics, transparency and corporate social responsibility on the foundation of his success in running the airline business. In addition to these selection criteria, the award also recognizes Tony’s efforts in helping to raise the standards of corporate governance practice in Malaysia. 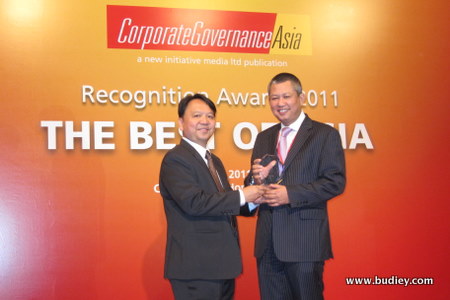 “As a peoples’ airline, our dream is to make air travel more accessible for the underserved. We put a great deal of emphasis in ensuring utmost transparency and efficiency in AirAsia because this will help us to continue in offering our low fares for all our guests. It is an award not just for myself but also my team, the “AirAsia AllStars”, who dedicated their heart and soul in growing the airline and making it stronger every year. With their passion and commitment, we achieved a phenomenal year in 2010 with many milestones achieved! We flew our 100 millionth guest in a span of only 8 ½ years and breached the billion-ringgit mark in net profit despite the rising fuel costs. Similarly, 2011 will be another exciting year for AirAsia because of the unwavering support and the can-do attitude by AirAsia AllStars!”, said Tony.