3 BIRTHDAY CONCERTS TO BE HELD IN NEW YORK, LA AND LONDON STARTING ON SEPTEMBER 18TH AT THE NEW YORK MET HOSTED BY ALEC BALDWIN WITH A SPECIAL PERFORMANCE BY ELTON JOHN 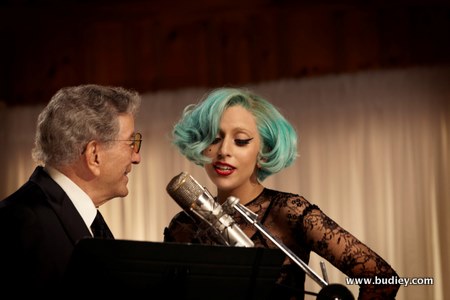 The final 2 sessions completed a celebrated list of artists to record with Bennett over the past 4 months, including the last ever studio recording with Amy Winehouse and recordings with amongst others: Michael Bublé ; k.d. Lang; Sheryl Crow; Mariah Carey; Andrea Bocelli; Queen Latifah and Willie Nelson. Lady Gaga joined Tony for a rendition of the Richard Rodgers song, “The Lady Is A Tramp” and Bennett and Franklin collaborated on the Alan and Marilyn Bergman classic, “How Do You Keep The Music Playing.” Both tracks were recorded live in the studio in New York in the past week in keeping with all the tracks, which saw Bennett travel around the world to record in person with each artist.

His travels took him from Italy to the home of Andrea Bocelli, New Orleans and the legendary Abbey Road studios in London to New York and LA.

DUETS II is the follow-up to the multi-platinum CD, DUETS, released in conjunction with Tony’s 80th birthday in 2006, which won him three Grammy Awards and was his best ever selling CD.

Phil Ramone takes the helm once again as producer, following up on his success with the Bennett’s first DUETS album. The album will be released in the UK on October 3rd to coincide with a special one-off performance at The Palladium Theatre in London.

DUETS II will be available from Tuesday, August 2nd on iTunes and Amazon and bn.com. iTunes, in an exclusive offering, which will allow fans to receive Tony’s duet with Michael Bublé, “Don’t Get Around Much Anymore,” instantly upon placing a pre-order for the album on iTunes. The video for the Bennett/Bublé track will also be available free this week on iTunes and showcases the great vocal chemistry between the two artists. Fans who set up pre-orders through www.tonybennett.com will get an exclusive video of Tony and k.d. lang’s duet of “Blue Velvet,” as well as an instant MP3 download of the track.

Bennett’s official 85th birthday celebration will be held on Sunday, September 18th following his debut performance at the Metropolitan Opera House. A special invitation-only dinner will take place after the concert and will be hosted by Alec Baldwin with a special performance by long-standing friend, Sir Elton John. The event will honor Bennett’s Exploring the Arts organization which funds and supports arts education in all five boroughs in New York City. In advance of the event, over $1.5M has already been raised as part of Bennett’s long-standing commitment to arts education in New York City. Ten years ago with his wife Susan Benedetto, he founded the Frank Sinatra School of the Arts (FSSA), which has since become one of the most well regarded and prestigious high schools in the country. It is located in his hometown of Astoria, Queens.

Tony will perform a second major star-led charity concert on behalf of AARP as part of their ‘Drive To End Hunger’ campaign at the Staples Centre in Los Angeles on September 24th before flying to London to perform a spectacular one-off show at The Palladium for the first time in 35 years.

The recording sessions for “Duets II” have also been filmed by Oscar-winning cinematographer Dion Beebe (“Chicago,” “Memoirs Of A Geisha”, “Collateral”) and will be released as a documentary in conjunction with the album, providing an in-depth, personal, behind-the-scenes study of Bennett’s unique life story and artistic way of working.

Entering his seventh decade as a recording artist with over 100 albums and 15 Grammy Awards including the Grammy Lifetime Achievement Award, Bennett has earned his legendary status many times over. He remains the Columbia recording artist with the greatest longevity at the label. His 2007 prime-time special, “Tony Bennett: An American Classic,” won seven Emmy Awards and was produced by long time fan Clint Eastwood. He has performed to 10 US Presidents, from Presidents Eisenhower, John F Kennedy, Johnson, Carter, Reagan, George Bush Snr, Clinton, George Bush and Obama. He also worked with and marched alongside Martin Luther King in his 1965 civil rights march and was given the Martin Luther King’s Salute to Greatness Award.

He is a visual artist as well with three of his original paintings featured in the permanent collection at the Smithsonian, including his portraits of Ella Fitzgerald and Duke Ellington. His humanitarian efforts are renowned and the United Nations honored him with their Humanitarian Award in 2007. He has published three books – his autobiography, “The Good Life” and two books of his paintings, “Tony Bennett: What My Heart Has Seen,” and “Tony Bennett In the Studio; A Life of Art and Music.” Bennett founded, in association with the Department of Education in New York City, the Frank Sinatra School of the Arts – a public arts high school in his hometown of Astoria, Queens. With his wife Susan, he established Exploring the Arts, a charitable organization which supports arts education in NYC public high schools. Exploring the Arts supports seven additional public high schools throughout New York City, and will expand to a total of 14 schools by this fall.

Speaking of recording with Tony:

Phil Ramone:
“ Tony’s artistic generosity was so appreciated by each performer, many of whom said that to record with such a master was a career highlight that they’ll always remember.”
Sheryl Crow:
“ He’s basically an honorary member of my family”
Michael Buble:
“ One of the most important things about being a great singer is that your voice is
Unmistakable when someone hears it. Tony Bennett’s voice.. no-one, even
sounds close.”

ANDREA BOCELLI STRANGER IN PARADISE
MICHAEL BUBLÉ I WANNA BE AROUND
MARIAH CAREY WHEN DO THE BELLS RING FOR ME?
NATALIE COLE WATCH WHAT HAPPENS
SHERYL CROW THE GIRL I LOVE
ARETHA FRANKLIN HOW DO YOU KEEP THE MUSIC PLAYING?
JOSH GROBAN THIS IS ALL I ASK
FAITH HILL THE WAY YOU LOOK TONIGHT
NORAH JONES SPEAK LOW
LADY GAGA THE LADY IS TRAMP
k.d. lang BLUE VELVET
JOHN MAYER ONE FOR MY BABY (AND ONE MORE FOR THE ROAD)
WILLIE NELSON ON THE SUNNY SIDE OF THE STREET
QUEEN LATIFAH WHO CAN I TURN TO?
ALEJANDRO SANZ YESTERDAY I HEARD THE RAIN
CARRIE UNDERWOOD IT HAD TO BE YOU
AMY WINEHOUSE BODY AND SOUL: