FOX Networks Group Asia (FNGA) announced a multi-city marketing stunt to promote the 100th episode and season 8 premiere of The Walking Dead on FOX across Asia on October 23 at 11.30 AM.

The Walking Dead: Escape Rooms promotional stunts will run between 18 October to 24 October 2017, at Sunway Pyramid Shopping Mall (Orange Concourse, Level LG2). Fans will find themselves locked in a room, with clues from the series and non-linear puzzles hidden throughout, given one mission – to escape. Players must work together to escape the themed rooms within an 8-minute time-frame. In Malaysia, the room features scenes from The Walking Dead seasons 5, 6 and 7. 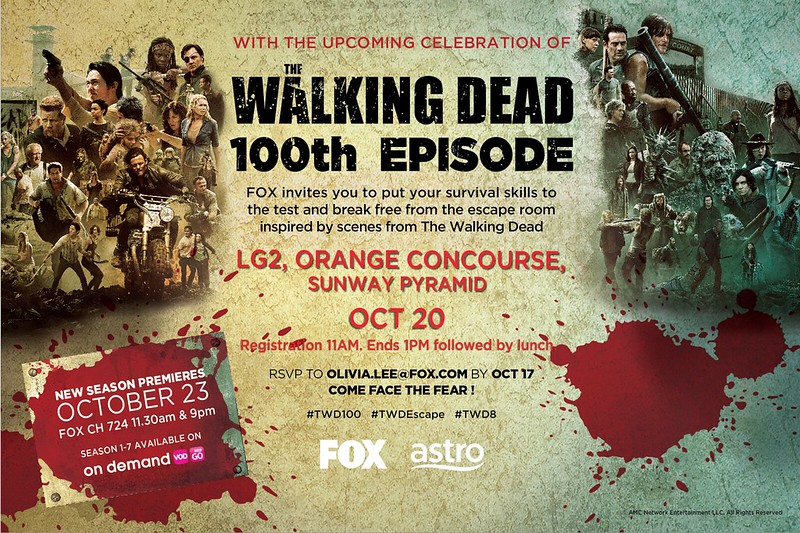 FOX Networks Group Asia (FNGA) announced a multi-city marketing stunt to promote the 100th episode and season 8 premiere of The Walking Dead on FOX across Asia on October 23rd at MYT 11.30AM.

Dean Dezius, Vice President – Entertainment Channels, Content and Communication, FOX Networks Group Asia, FNGA said, “The Walking Dead is one of our most successful shows in Asia on FOX. We have millions of fans across the region eagerly awaiting the new season, and we’re excited to provide them with a real life The Walking Dead experience, in which they collaborate with one another as part of this year’s ambitious stunt. We’re confident this exhilarating experience complements the Season 8 launch and The Walking Dead’s 100th episode perfectly.”

The Walking Dead, one of the world’s most watched dramas, returns for a terrifying and exhilarating series, consisting of 16 episodes. In this highly anticipated 8th season, Rick brings “All Out War” to Negan and his forces. The Saviors are larger, better equipped and ruthless – but Rick and the unified communities are fighting for the promise of a brighter future. The battle lines are drawn as they launch into a kinetic, action-packed offensive. Up until now, survival has been the focus of Rick and his group, but it’s not enough. They have to fight to take back their freedom so that they can live. So that they can rebuild. As with any battle, there will be losses. Casualties. But with Rick leading the Alexandrian forces, Maggie leading the Hilltop, and King Ezekiel leading the Kingdom — Negan and the Saviors’ grip on this world may finally be coming to an end.

Can You Break Free from The Walking Dead Escape Room?