The wait for the return of two-time Emmy Award-winning reality television singing competition, The Voice, is finally over! Since its airing in 2011, The Voice has proved to be a global phenomenal hit and is now entering into its eleventh season set to premier on 20th September on Star World. Fans of The Voice in Malaysia can now tune in on the same day as the US broadcast.

It was a historic moment last season when Alisan Porter was announced as the winner, making celebrity coach Christina Aguilera the first ever female coach to win the competition. Now, show creators are creating more history because for the first time ever in the upcoming Season 11, there will be more than one female coach on the panel – Alicia Keys and Miley Cyrus! 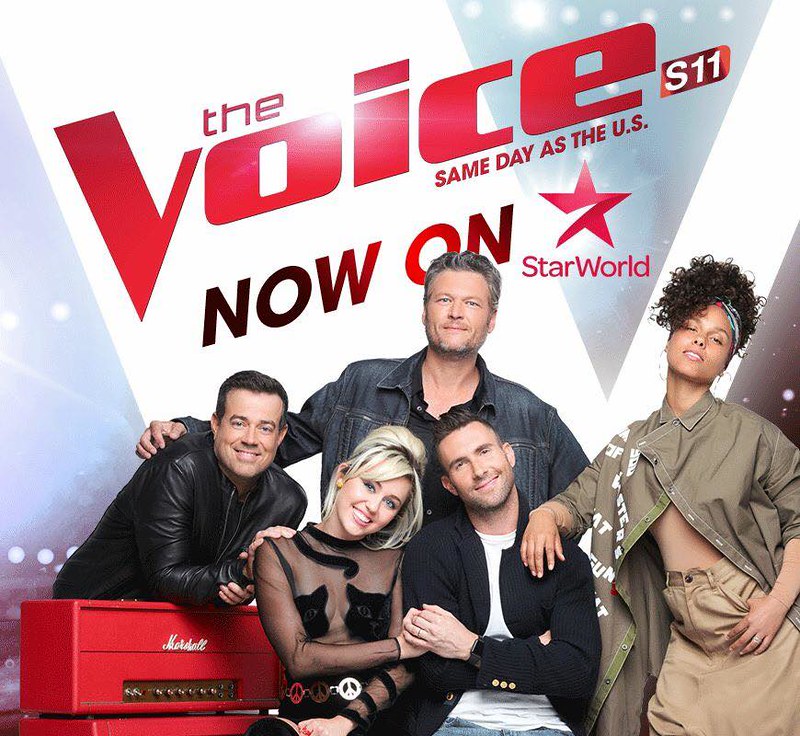 The Voice Season 11: The Biggest & The Best Battleground Ever

[dropcap]H[/dropcap]aving been guest mentors in previous seasons, Alicia Keys and Miley Cyrus will be joining veteran coaches Adam Levine and Blake Shelton this round to battle it all out to recruit the best vocalists for a chance to win ‘The Voice’ Season 11. It should be noted that both Levin and Shelton have been on every season since it started out.

Fans of the competition can also expect a line of new, celebrity advisors to the coaches. American rock singer and songwriter, Joan Jett, will be sharing advice to Miley Cyrus; while Alicia Keys will be having the ‘One Call Away’ singer Charlie Puth as a mentor. Sammy Hagar, the former lead singer of hard rock band Van Halen, will be helping Adam Levine out and Bette Midler aims to aid Blake Shelton this time around.

[dropcap]F[/dropcap]or those who are unfamiliar, The Voice is a one-of-a-kind reality television format that features five stages starting off with the blind auditions, battle rounds, the knockouts, the live playoffs and finally, the live performance shows. It employs a panel of four celebrity musician coaches who critique the vocalists’ performances and guide their teams of selected vocalists through the remainder of the season. The coaches compete to ensure that their last standing vocalist wins the competition, thus making them the winning coach. The winning vocalist will receive USD100,000 and a record deal with Universal Music Group.

[pullquote align=”right”]Which vocalist and celebrity coach will win The Voice Season 11? Tune in and find out![/pullquote]

About Star World
Part of FOX Networks Group, Star World is one of Asia’s finest leading general entertainment channels focused on delivering the best content to trend setters and story seekers across the region. The channel offers exclusive access to dramas, comedies, reality shows and special live events from the U.S and around the world and original shows produced in Asia, exclusively for audiences in Asia.

About Fox Networks Group (FNG)
FOX is the #1 general entertainment channel globally. The brand is synonymous with ground-breaking Hollywood entertainment and delivers a varied programming schedule that includes comedy, drama, science fiction, action and animation. It is inclusive and broad in its appeal, and delivers the best shows first to a wide audience.

FOX is available in 31 local languages in over 255 million homes across 127 countries outside the U.S. As a result of its scale and global synergies, FOX was able to pioneer a global day-and-date release strategy for key series, and remains the only international network able to release TV series at the same time as the U.S at scale. FOX is available as a linear SD and HD channel through authenticated FOX Play apps.