The University of Cambodia (UC) has named its business school after AirAsia Group CEO Tony Fernandes.

UC unveiled the Tony Fernandes School of Business and its accompanying logo on the eighth floor of the main campus building last Wednesday.

A lecture hall in the same building, which will be used for hosting conferences, workshops and seminars, was also christened after AirAsia. 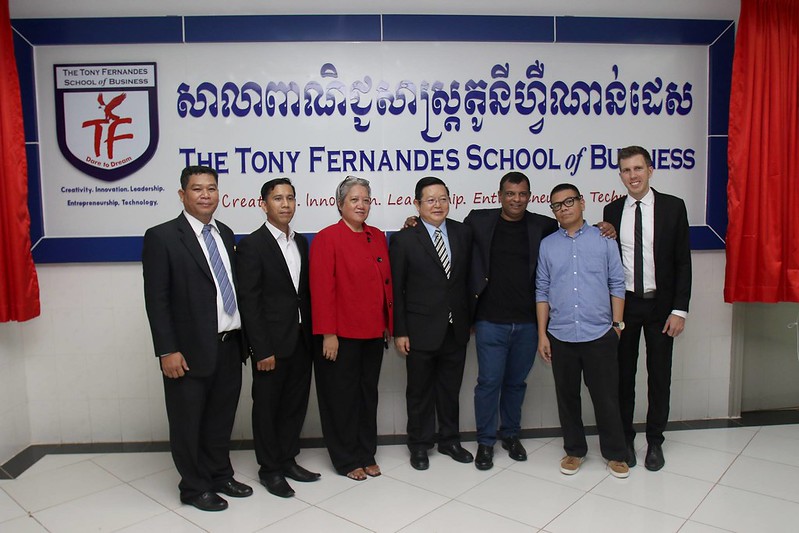 Fernandes had earlier been conferred an Honorary Doctorate in Management by the university at SEATV Studio here for revolutionising air travel in Asean and facilitating regional integration through greater connectivity.

The University of Cambodia Founder, Chairman and President HE Dr Kao Kim Hourn said, “It is a privilege to name this school after Tony, in honour of his outstanding success as an entrepreneur. What makes him truly exceptional is that, despite his many achievements, he remains humble and down-to-earth, demonstrating compassion for others through his philanthropy and support for sports. We hope that by bringing Cambodia and Malaysia closer, we can further strengthen the fraternal relations between our two countries in years to come.”

AirAsia Group CEO Tan Sri Tony Fernandes said, “What an amazing honour to be recognised by The University of Cambodia. I’m not sure I deserve to have a school named after me but I hope the students here will be inspired by what they can achieve if they believe the unbelievable, dream the impossible and never take no for an answer.”

AirAsia operates five routes to Phnom Penh and Siem Reap – with a sixth to Sihanoukville from next month – connecting Cambodia to the rest of Asean and beyond with just one stop via Kuala Lumpur or Bangkok to more than 120 destinations in Asia, Australia and New Zealand, the Middle East and the US.

The University of Cambodia School of Business was ranked as Cambodia’s top business school in the Eduniversal Business Schools Ranking 2016, which rated it as a “good business school with strong regional influence”.