[dropcap]M[/dropcap]ovie buffs and cinema-goers were treated to an exceptional 12-hour run of The Twilight Saga Marathon overnight featuring Twilight, New Moon, Eclipse and Breaking Dawn Parts 1 and 2, the latter being the latest and last installment in the series.

Avid fans and participants of the movie marathon began crowding TGV Wangsa Walk since 10.00pm to redeem their marathon tickets.

It was an exciting night at the cinema vicinity where many Twilight fans took the opportunity to join TGV Cinemas by playing dress up in costumes that best depict the characters in this blockbuster hit. Three deserving winners were selected and rewarded with exclusive Twilight collector’s movie merchandise items. 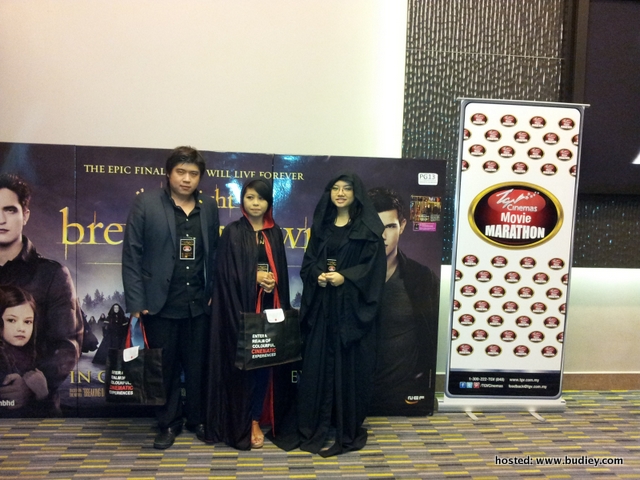 The anticipation to catch the final conclusion of the Twilight Saga grew even bigger from time to time where lucky draw sessions were held during movie intervals. Lucky winners were ecstatic to walk away with Limited Edition Twilight collectibles. These merchandise items are exclusively made available for the Twilight Saga Marathon this year.

“TGV Cinemas is thrilled to host The Twilight Saga Marathon this year and to finally witness the epic conclusion of this smash hit together with TGV fans. What better way to present the final episode when you can enjoy all five installments of the movie franchise overnight in a perfectly matched cinema ambience at TGV Wangsa Walk. This is part of TGV Cinemas’ approach to continuously excite Malaysians to enjoy watching movies in the most unique way possible,” said Kenny Wong, CEO of TGV Cinemas.

TGV Cinemas will continue to organise movie marathons in the future as part of its approach to bring a unique new dimension to entice movie-goers in Malaysia. In 2013, movie buffs can expect more movie marathon events for other future blockbusters in the coming year.

The Twilight Saga Marathon is brought to you exclusively by TGV Cinemas and Nusantara Edaran Filem. For more information log on to www.tgv.com.my or like us on facebook/TGVCinemas or follow us on twitter/TGVCinemas.