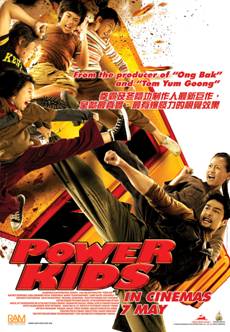 Synopsis Film Power Kids
Four Children are forced to forget their differences and band together in this action packed drama. Wut, Pong and Kat are a group of very close friends who enjoy nothing more than practicing the latest traditional Thai boxing moves.

They make it their mission to help Wut’s younger brother Wun, after learning that he suffers from a debilitating form of heart disease. They are joined by an unlikely aide Jib, a girl from a totally different social background from Wut. It looks like everything is going to work out but then something unexpected and terrifying transpires. A group of terrorists belonging to led by the notoriously viscous Paeda has taken control of the hospital.

The four children, realizing that Wun’s new heart is now in jeopardy, decide to embark on a daring raid to save their friend’s heart and possibly the whole hospital. Unfortunately the children are not as prepared as they would have wished. They are captured along with a UN ambassador, doctors, nurses and patients and are used as ransom in an effort to show Paeda’s determination and capability to the world. Will the children be able to escape, secure the heart for their Wun and stop the unnecessary slaying of many innocent lives?

This THAI ACTION movie will be open to public on 7 May 2009 at local cinemas and is distributed by RAM Entertainment.