The first to witness the simultaneous debut of the international smash-hit comic sensation Supa Strikas in both print and animation, young Malaysians will experience a spike in football fever come December. 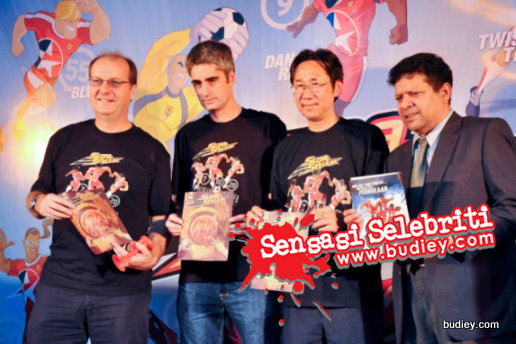 Caltex™, one of Asia’s leading energy brands, is sponsoring the illustrated phenomenon Supa Strikas, which harnesses the local passion for football and universal appeal of comics to engage the local youth market in the joy of reading. Primed for a double impact introduction in print and television, the adventures of Supa Strikas will be chronicled in a free monthly 24-page insert into Kosmo every first Saturday of the month as of 6 December 2008 and its first-ever long format animation series airing on RTM2, 5pm every Sunday as of 4 January 2009. Both mediums will be in Bahasa Malaysia.

Supa Strikas is the gripping story of a professional football team and its colorful and entertaining characters. The story begins when the super-talented (and Malaysian) Shakes Mokena is spotted playing in a local amateur league and follows his colorful rags-to-riches tale.

“We took special care in localizing the Supa Strikas content to ensure maximum relevance to our Malaysian youth. Like any international football team, the champions of the fictional soccer league consist of talented players from around the world, including our very own Malaysian hero, Shakes. Observant readers and viewers will note the subtle incorporation of iconic Malaysian landmarks and catch-phrases that add authenticity to the localized flavor of the series, making it more relatable to its audiences. These efforts aim to encourage the love of both football and reading at grassroots level,” said Mr Oh.

Malaysia is the first Asia Pacific country to simultaneously adopt Supa Strikas in two formats. From the soccer fields of South Africa and Colombia to the cricket pitches of Pakistan, the Supa Strikas has already been successfully localized, published and distributed via newspapers in 17 countries. The animated show is set to broadcast in 15 countries across Africa, Latin America and Europe during 2009. While the target audience is nine to 16, Supa Strika’s appeal has already reached an estimated 10 million readers ranging up to the age of 35.

Caltex™’s sponsorship of Supa Strikas provides unique and significant brand exposure through the mediums, with the Caltex™ logos appearing on all player uniforms, as well as advertisements in each edition.

Note: Supa Strikas comic books will be distributed in the first Saturday issue of Kosmo! every month. The 13-part animated series will be aired on RTM2, every Sunday at 5pm.