In a first of its kind partnership, Spider-Man will be the first Super Hero ambassador for Earth Hour, the global movement organized by WWF (World Wide Fund for Nature), with a message to inspire individuals to use their power to become Super Heroes for the planet.

[pullquote]Andy Ridley, CEO and Co-Founder of Earth Hour, and Jeff Blake, Chairman, Worldwide Marketing and Distribution, Sony Pictures Entertainment, made the announcement in conjunction with the launch of Earth Hour Blue – a radical new digital crowdfunding and crowdsourcing platform for the planet, launched to engage people around the world and participants in the famous lights out event, which this year will be held on Saturday March 29, at 8:30pm.[/pullquote]

This year, Earth Hour and the hero of the highly anticipated motion picture The Amazing Spider-Man 2 – along with the film’s stars, Andrew Garfield, Emma Stone, Jamie Foxx and director Marc Webb – are throwing their support behind Earth Hour Blue, which aims to harness the power of the crowd to raise funds for on-the-ground environmental projects from across the world.

“I’m proud Spider-Man is the first Super Hero ambassador for Earth Hour because he shows we can all be Super Heroes when we realize the power we all have,” says Andrew Garfield, who plays Spider-Man in the upcoming film. “Earth Hour is a movement that has created massive impact around the world, so imagine what we can do this year with Spider-Man by our side.” 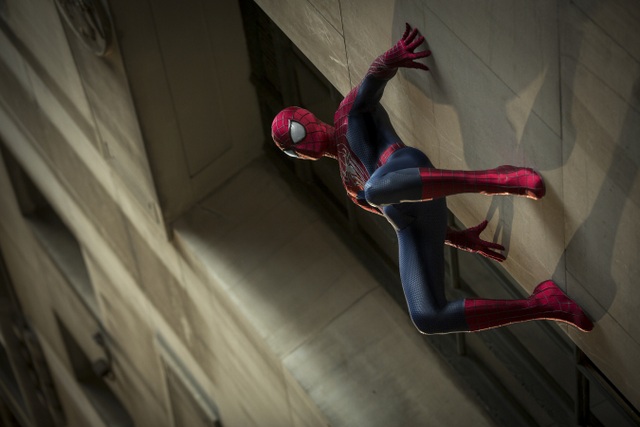 The crowdfunding section of the new platform will allow participants to help deliver energy efficient stoves to families in Madagascar, help communities in the Philippines build fiberglass boats to withstand climate impacts like Typhoon Haiyan and raise funds to expand and conserve the iconic Table Mountain National Park in South Africa, with many more projects to come.

“Earth Hour gives you the power to inspire anyone, even if you’re just one person, and Earth Hour is much more than an hour. There are great projects from the crowd, for the planet, happening all over the world,” said Emma Stone.

The Amazing Spider-Man 2 director Marc Webb is the first celebrity ambassador to announce the Earth Hour Blue project he is backing, which aims to provide better equipment for WWF Rangers protecting Indonesia’s endangered wildlife such as the Sumatran Tiger, Elephant, Rhino and Orangutan and their forest habitat.

“Earth Hour is a movement full of Super Heroes – people harnessing the power of the crowd to inspire change for the good of the planet, imagine the possibilities when we come together and do more,” said Marc Webb.

Earth Hour And Spider-Man Join Forces To Save The Planet

[dropcap]E[/dropcap]arth Hour has grown to involve hundreds of millions of people from all walks of life across 7000 cities and towns and 154 countries and territories. Jamie Foxx who plays the villain Electro in the film said, “Earth Hour isn’t just about lights off; it’s about people across the world coming together throughout the year to join forces to improve the planet. Never underestimate your power, never underestimate what you can do.”

Individuals can also use Earth Hour’s crowdsourcing platform for Earth Hour Blue, which will call for people to add their voice to some of the biggest environmental campaigns across the world; including an Instagram campaign for people to share their love of Australia’s Great Barrier Reef, as part of WWF-Australia’s “Lights Out For The Reef” theme for Earth Hour 2014.

Global participants in the movement will also be able to sign the Shark Saver’s “I’m FINished With FINS” pledge, which engages celebrities and public figures throughout Asia to help end shark finning in marine waters for the consumption of shark-fin soup.

“The idea of Earth Hour has grown beyond anything we could have dreamed. This year with the help of Spider-Man by our side, we are taking the movement to the next stage. We hope that Spider-Man will empower individuals to be Super Heroes for the planet, and use their voice or their dollar to support projects or campaigns around the world. It’s about harnessing the power of the crowd. That’s what Earth Hour Blue is all about,” said Ridley.

Sony Pictures Entertainment will join by contributing to a WWF-China and Earth Hour Blue project that provides efficient cookstoves to prevent deforestation in the habitat of the Giant Panda. Through its efforts, the studio will receive Gold Standard carbon offsets that render the entire physical production of The Amazing Spider-Man 2 as well as its publicity tour, carbon-neutral.

Expanding on many sustainability efforts over the years, The Amazing Spider-Man 2 became the most eco-friendly tentpole production in the history of Columbia Pictures. These environmental efforts, on set and off, were supported at every level – from producers, studio executives, and cast and crew and began as soon as the film went into pre-production.

“Spider-Man’s always been a very relatable Super Hero. Peter Parker is a hero to all people, and an inspiration, so it seems very fitting that he should join forces with Earth Hour to empower every single individual to help save the planet,” Blake added. “I’m also very proud of the fact that The Amazing Spider-Man 2 is entirely carbon-neutral. We made a commitment to be as eco-conscious as possible during production itself, when we took a special effort to think green and avoid waste; now, completing that process with Earth Hour Blue is a wonderful testament to what we can achieve when we all work together.”

Earth Hour and its Super Hero ambassador Spider-Man remind us that “with great power comes great responsibility,” so get involved and use your power at earthhour.org.

About Earth Hour
Earth Hour is a global environmental movement of WWF. As one of the first opensourced environmental campaigns, Earth Hour has grown from a symbolic event in one city into a global movement, crowdsourcing actions from individuals, businesses, organizations and governments to generate environmental outcomes. In 2014, Earth Hour Blue sees the movement enter the most exciting stage of its evolution, to be at the forefront of crowdfunding and crowdsourcing for causes, innovation and creativity for the planet.

About WWF
WWF is one of the world’s largest and most respected independent conservation organizations, with almost five million supporters and a global network active in more than 100 countries. WWF’s mission is to stop the degradation of the earth’s natural environment and to build a future in which humans live in harmony with nature, by conserving the world’s biological diversity, ensuring that the use of renewable natural resources is sustainable, and promoting the reduction of pollution and wasteful consumption.

It’s great to be Spider-Man (Andrew Garfield). For Peter Parker, there’s no feeling quite like swinging between skyscrapers, embracing being the hero, and spending time with Gwen (Emma Stone). But being Spider-Man comes at a price: only Spider-Man can protect his fellow New Yorkers from the formidable villains that threaten the city. With the emergence of Electro (Jamie Foxx), Peter must confront a foe far more powerful than he. And as his old friend, Harry Osborn (Dane DeHaan), returns, Peter comes to realize that all of his enemies have one thing in common: OsCorp. Directed by Marc Webb. Produced by Avi Arad and Matt Tolmach. Screen Story and Screenplay by Alex Kurtzman & Roberto Orci & Jeff Pinkner. Based on the Marvel Comic Book by Stan Lee and Steve Ditko. The film will be released in theaters internationally beginning April 16, 2014, and in the U.S. on May 2, 2014. #SpiderMan

About Marvel Entertainment
Marvel Entertainment, LLC, a wholly-owned subsidiary of The Walt Disney Company, is one of the world’s most prominent character-based entertainment companies, built on a proven library of more than 8,000 characters featured in a variety of media over seventy years. Marvel utilizes its character franchises in entertainment, licensing and publishing. For more information visit marvel.com. ©MARVEL