4th July 2011, Sepang: Rock your world this July with world defining acts from Broadway’s best to American Idol sensations! Or simply check out Malaysia’s unique diversity at an all-day creative arts festival and unwind with fashion, music & artistic exhibitions with AirAsiaRedTix.com – the only source of tickets to international world-renowned entertainment.

If you are familiar with the movie DREAMGIRLS with leading artists, Beyonce and Jennifer Hudson, you are about to be entertained by DREAMGIRLS the Broadway musical. This highly sought after musical is now brought to Malaysia live in Istana Budaya, presented by BROADWAY ACADEMY who has been given full rights to stage Dreamgirls in Malaysia. 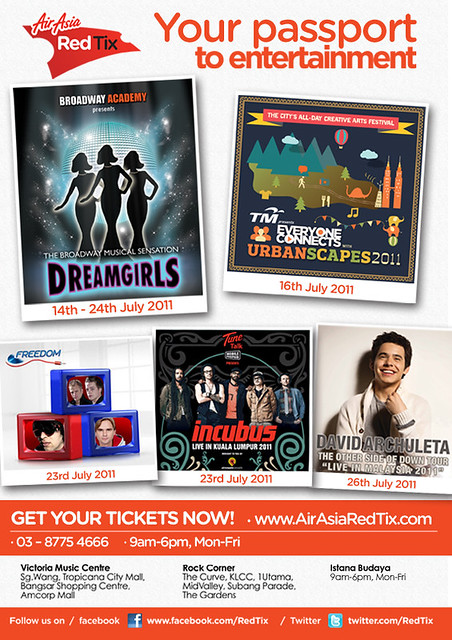 Urbanscapes 2011 is an all-day user-generated creative arts festival. The event aims to bring together local communities and participants from the fields of MUSIC, FASHION, ART, DESIGN & PHOTOGRAPHY under a single banner

After a romp around the peninsular, FREEDOM is scheduled to hit KL for an all-star finale featuring some of the biggest deck techs around; plus the DJs of your choice and more. Held in two rooms, dance lovers can certainly expect twice the normal fun.

International American rock band, Incubus makes their return to Kuala Lumpur for a one-night-only concert at Stadium Negara. From Calabasas, California, Incubus is a hit with both modern rock and mainstream audiences. They have conquered radio with a series of relationship songs that may have sanded down the band’s rough edges but secured a large fan following.

He may have been a runner-up on American Idol, but this sensation refuses to take a back seat in his career. The numerous requests from fans in Malaysia to bring David Archuleta back to Malaysia have finally been answered. He will be performing a full concert in Kuala Lumpur as part of his “The Other Side of Down Tour”.

Tickets for the above events can be purchased online at AirAsiaRedTix.com.

To satisfy customer’s demand for entertainment, Asia’s largest low-cost carrier is committed at offering a full travel experience. AirAsiaRedTix.com was incepted and is positioned as the world’s ultimate gateway to international music and entertainment events – summed up in its tagline, “The Passport to Entertainment”.

For the most updated events line up on AirAsiaRedTix.com, be our Fan on Facebook.com/AirAsiaRedTix and follow us on Twitter.com/RedTix.

About AirAsiaRedTix.com
AirAsiaRedTix.com is the hottest, smartest new way to discover, discuss, review and book tickets to an international line-up of concerts, sporting events, musicals, theatre performances and more. AirAsiaRedTix.com partners premier event organizers and promoters in Asia and across the globe to offer customers a platform from which to leap into an exciting world of top-notch entertainment. Make bookings online and have electronic tickets issued and emailed to you or sent to your mobile phones – so waiting in queue is a thing of the past! Connect with other fans and enthusiasts in online forums to share your views, reviews and recommendations on anything from sports to music to the arts.