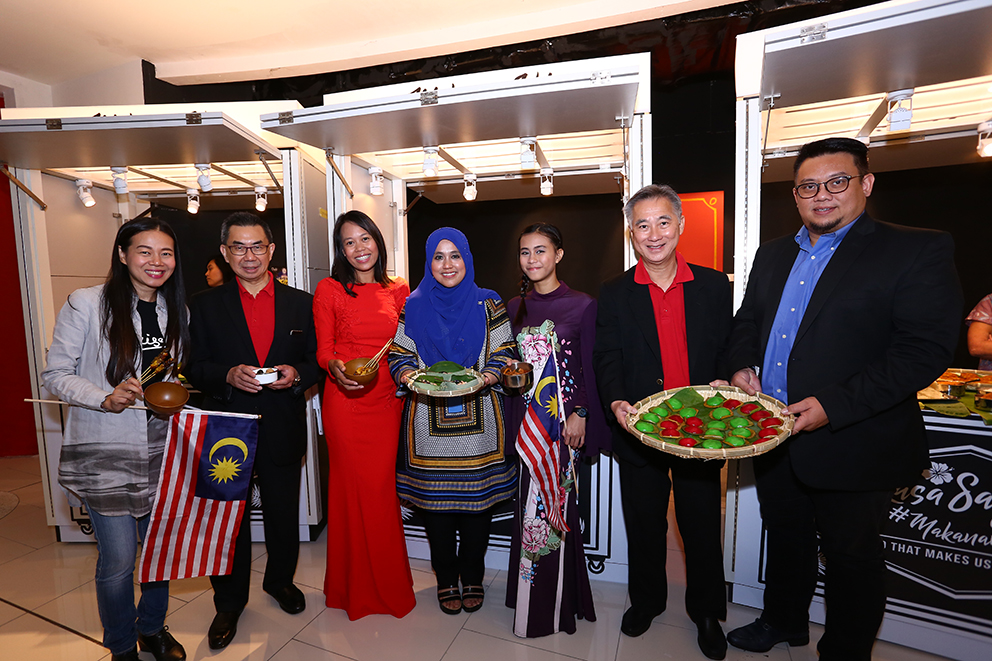 A host of events and activities were featured, the Rasa Sayang experience came in three unique ‘flavours’ for visitors to enjoy, including #makanankita, #sejarahkita and #tempatkita.

Dato’ Ar. Michael Ong, Group Executive Director of the Quill Group of Companies, said, “There is no better way to the heart of a Malaysian than through their stomach. With Rasa Sayang at Quill City Mall KL, we hope to draw more Malaysians together to share their food and stories with each other in the spirit of our Hari Kebangsaan Malaysia.” 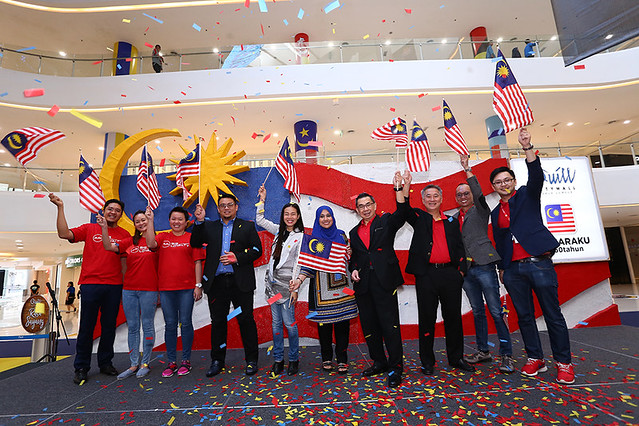 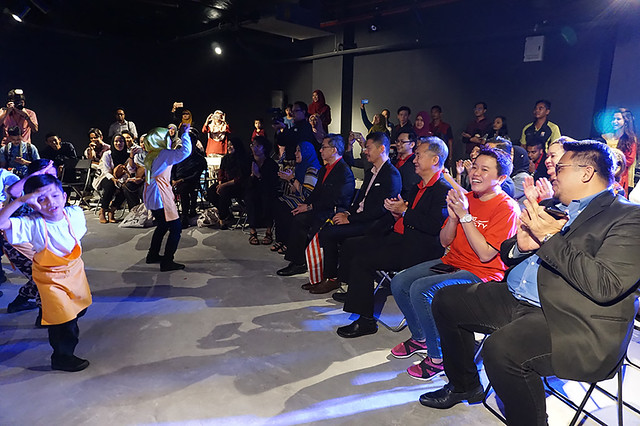 #Makanankita Pop-up Warungs
There is no truer adage to describe Malaysians than the one about being what you eat and as the centrepiece of the Rasa Sayang experience, #makanankita celebrates our food for the way it can unite Malaysians of every stripe. Shoppers and visitors were surely exposed to the wide variety of 60 food here in Quill City Mall KL.

Food curators Priya Prabakaran and Edea Nor scoured the country in search of the best, the most authentic or the most unique food and flavours and brought them together under one roof.

At pop-up warungs with hip designs around the mall, old school hawkers and cooks serve up a dizzying array of Malaysian cuisine including Kelantanese food, Sarawak laksa, halal dim sum, pasembur and a mouthwatering selection of kuih.

And if you have a sweet tooth, you will be pleasantly surprised by the unique desserts with fanciful names you can find here like air jagung heaven, gelato durian D24 and onde-onde cupcakes. 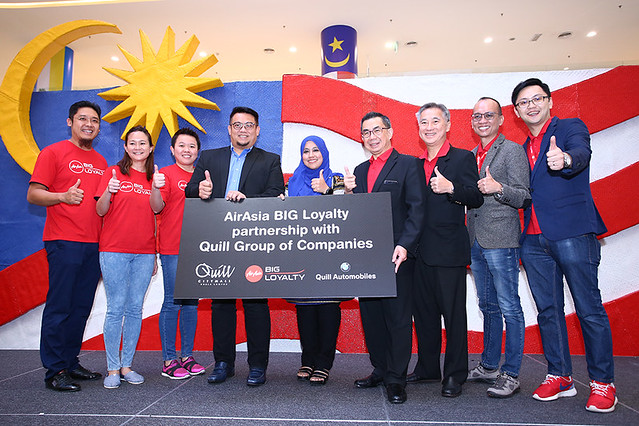 Interesting redemptions are in-store for all shoppers; every shopper can enjoy a can of Oishi or 100PLUS for FREE with a minimum purchase of RM10 from any vendor at #WarungKita.
#Makanankita Food-themed Contests
Those who fancy themselves masters of the kitchen tested their mettle and won fabulous prizes in a food contest like ‘Cook for Malaysia’.

Speed, skill and ability are the name of the game for ‘Cook for Malaysia’ as contestants in teams of two worked together to beat the clock and the competition in a display of kitchen prowess to win up to RM8,000 in shopping vouchers.

For details on how to enter the ‘Cook for Malaysia’ challenge, contact us at [email protected] before 4 September 2017. 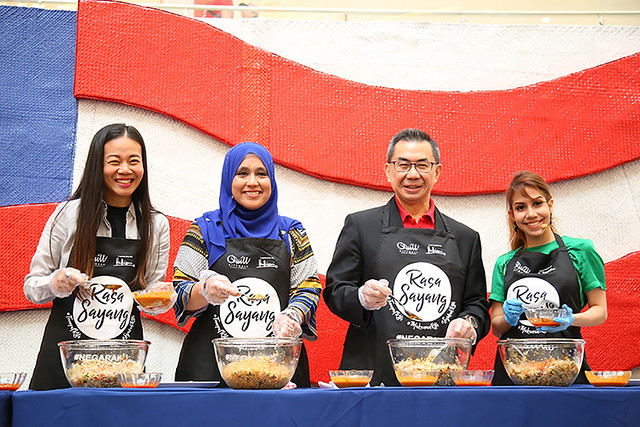 #Sejarahkita is the continuation of five years of Niki’s storytelling projects organised – in collaboration with Kakiseni – in conjunction with Malaysia Day and Hari Kebangsaan Malaysia.

In 2013, Niki’s storytelling team travelled to all 13 states in 15 days, and again in 2015, when a capsule was picked up state by state by a diverse group of Malaysians, who each filled it with soil from their respective states.

This year, his project marked #60tahun since Merdeka by re-presenting the many stories he had amassed over the years while showcasing new ones collected this year in video and photo exhibitions that visitors can be a part of by adding their own experiences.

#Tempatkita Theatre Shows
Your Rasa Sayang experience at Quill City Mall KL wouldn’t be complete without catching one of the many #tempatkita shows including a monologue session by Asia’s Next Top Model Alicia Amin, directed by Nour Amir and produced by Shufitri Shukardi as well as a spoken-word, immersive-theatre experience called ‘Malaysia Throws Herself a Birthday Party’ presented by spoken-word movement Speak City Asia in collaboration with local theatre company, theatrethreesixty.

Repurposing mall shop-lots into pop-up theatres, #tempatkita is a unique experiment that seeks to make space for local indie theatre groups and bring more arts to the masses.

These shows are curated by Shufitri Shukardi from Kakiseni and are proof that art can take place anywhere artists and audiences meet in an exchange of creativity and ideas.

According to Low Ngai Yuen, President of Kakiseni, “Quill City Mall KL has been an amazing partner to work with on an event like this that make a trip to the mall a memorable one. Rasa Sayang give visitors to Quill City Mall KL the chance to have unique experiences where they get taste, hear and watch a little bit of what makes us Malaysian all in one convenient location.”

Another good news, in conjunction of celebrating Hari Kebangsaan Malaysia 2017, we introduced the BIG Merdeka Giveaway from 26 August to 22 September 2017 where AirAsia BIG Loyalty will reward free round trip flights to Penang, Langkawi, Terengganu, and Sabah to 40 lucky winners! To participate in the giveaway, customers would just need to spend a minimum of RM60 at any shop in Quill City Mall KL in a single receipt. Then, simply snap a photo of the receipt via the AirAsia BIG Loyalty mobile app. TEN (10) winners will be selected on a weekly basis. Terms & Conditions apply.

This event is in partnership with Kakiseni, in support of Tourism Malaysia and DBKL together with general sponsors of beverage by 100PLUS Malaysia & Oishi.

About Quill City Mall Kuala Lumpur
An integrated shopping, dining and entertainment centre that is designed for people from all walks of life to meet, gather and socialize. Quill City Mall, the vibrant lifestyle centre is strategically located in the heart of Kuala Lumpur, along Jalan Sultan Ismail and spans across with a net lettable area of approx. 780,000 sq.ft. The 8 level of retail floors provide a dynamic ambience with Aeon as the main anchor and tenants such as H&M, United Colors of Benetton, Next, Hamleys, Best Denki, Red Lobster, Longhorn Steakhouse, GSC, Celebrity Fitness, MPH, Gajah Duduk and The Chicken Rice Shop. Aragan Yokocho, a 4 season themed Japanese dining restaurant of approx. 19,000 sq.ft is now open, offering a vast variety of seafood and produces flown fresh from Japan.

About Kakiseni
At Kakiseni, we believe that more people should have better access to performing arts in this country because when more people get together to have the same conversation, it makes for enriching experiences. Beginning in 2001, Kakiseni is made up of a strong team of creative professionals who are intent on making that happen. It’s our job to develop performing arts in Malaysia and then share it with the world. To learn more about us, visit kakiseni.com.

About the curators of Rasa Sayang

#SejarahKita curator – Niki Cheong
Niki Cheong is most known for his column The Bangsar Boy, which ended its 11-year run in 2017. He was formerly editor of The Star’s youth platform R.AGE. Niki is also a social activist often sought after for his commentary on social issues in Malaysia. Since his days as a teenage journalist, Niki has been most interested in capturing stories of his fellow Malaysians, which led him to this storytelling project that has run over five years. He is currently a PhD researcher based in Nottingham, UK.

#MakananKita curators – Edea Nor
Edea is a professional host and emcee who once hosted her own radio show on Capital FM. She is also an intrepid entrepreneur who started The Rebellious Chickpea, a food delivery service, and onethreeseven, a healthy lifestyle space. When she isn’t working, Edea enjoys pushing her body to the limit as a triathlete and adventure racer.

Priya Dharshini Prabakaran
Priya is a marketing professional with extensive producing and marketing experience in the music industry and on radio. She’s also a major foodie and fondly remembers taking family outstation road trips to just sample some of Malaysia’s finest cuisines. She now continues this tradition with her friends.

#TempatKita curator – Shufitri Shukardi
Bitten by the theatre bug after a workshop by Rumah Anak Teater, Shufitri is a theatre practitioner with producing and co-directing experience under his belt from his first show, ‘Mesyuarat Kampung’. He also works at Kakiseni as the social media and community developer for the performing arts and there’s no stopping him from making sure the performing arts community comes together.