One of Indonesia’s biggest entertainer, AFGAN will hit the stage in Kuala Lumpur come September. He will be performing on Friday, 8.30pm, 18 September at the Plenary Hall, Kuala Lumpur Convention Center.

Fresh from his successful “Dari Hati” concert at the Jakarta Convention Center in February, AFGAN is excited to be up close and personal with all his Malaysian fans with “KONSERT SUARA HATI AFGAN”. For the first time in Malaysia, AFGAN will be showcasing his biggest concert repertoire, featuring songs that are close to his heart. Backed by a ten piece band with a special horn section, giving it a “Funky” touch. The show promises a dynamic combination of his soulful voice, backed by The Gandarians.

The concert is AFGAN’s way of celebrating the immense support from his thousands of loyal and devoted fans in Malaysia and around the region. Aptly titled “KONSERT SUARA HATI AFGAN”, each song has been carefully selected to express and spread his message of love to all his fans.

The concert will also be featuring the incomparable female Indonesian singer, Rossa. The blend of these two amazing voices and talent will surely be an added bonus for the evening. AFGAN will be performing all his hits for two hours which should not be missed by any of his diehard fan.

“KONSERT SUARA HATI AFGAN” is organized by Netzah Productions Sdn Bhd and is a one night only performance by AFGAN. Tickets for the concert will be available from 23 June 2015 at www.mytickets.asia. There will be an early bird discount of 15% for the first 250 ticket purchasers. For further information please call 03 8080 8700 or visit www.netzahproductions.com. 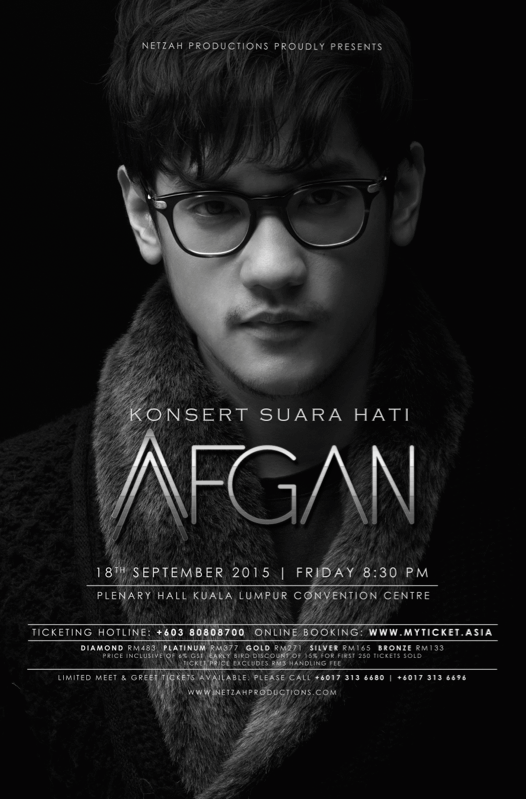