To kick off its first local campaign, LINE will be airing a locally-filmed TV commercial starring Siwon Choi, an internationally recognized singer and actor, who portrays a boyfriend interacting with his girlfriend on LINE – a situation to which many Malaysians can relate. Siwon Choi himself attended the press conference to show his support for LINE and unveil his virtual brand room and avatar on LINE PLAY, LINE’s avatar communication service. 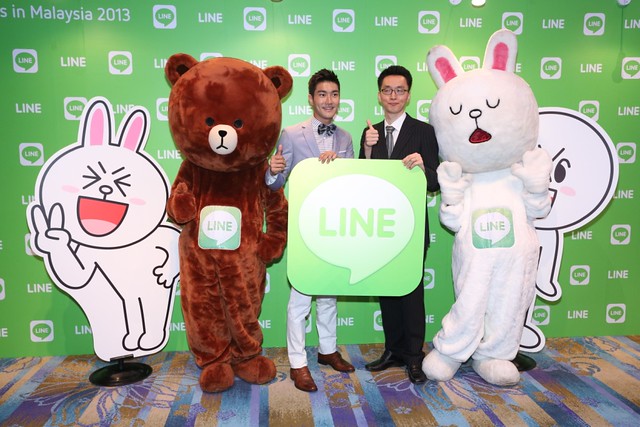 The commercial, shot in Tasik Ampang Hilir amongst other familiar Kuala Lumpur locations, showcases a couple who, while separated by physical distance, grow closer via their connection on a digital social platform: LINE. This embodies LINE’s global aim, to bridge the growing gap between people in an ever-expanding digital world.

“We have carefully selected Malaysia as a key market for this new transition as we feel that Malaysia has a high growth potential and also has one of the highest smartphone penetration rates in the world. Therefore, we plan to shape LINE and its family brands to complement the needs of our users in the Malaysian market, by continuing to invest in enabling simpler and more convenient use of the service, connecting users around the world without any borders between desktop and mobile.”

LINE has evolved into much more than a mere mobile messenger app, closely pursuing its goal of becoming a Smartphone Life Platform. With games, tools, social connectivity and entertainment apps complementing LINE Messenger itself, the LINE family has grown into a multi-faceted platform that allows users to create, share and connect with one another across any platform.

“We expect that 2013 to be a year of transformation for mobile messengers to become a mobile platform for content distribution. LINE has already established partnerships with many local businesses, corporations, as well as well-known personalities to grow its local content and provide a more enriching experience for our users who are always seeking new ways to enhance their lifestyles,”

To provide a more local flavour to its services, LINE has also garnered the support of key Malaysian celebrities on LINE Official Accounts that allow them to directly engage their fans. Among the personalities unveiled today were Zizan Razak (Raja Lawak), Danny One, Liyana Fizi, Isaac Dang, Chris Tong Bing Yu, Jane Ng, and Keqing.

In addition to celebrity partnerships via LINE’s Official Accounts, LINE is also transforming the music industry by becoming a new platform for music. G-DRAGON of K-pop group Big Bang recently released a new song via his LINE Official Account. Fans can download an exclusive set of G-DRAGON Stickers which allows them to listen to his new song “GO” for free. 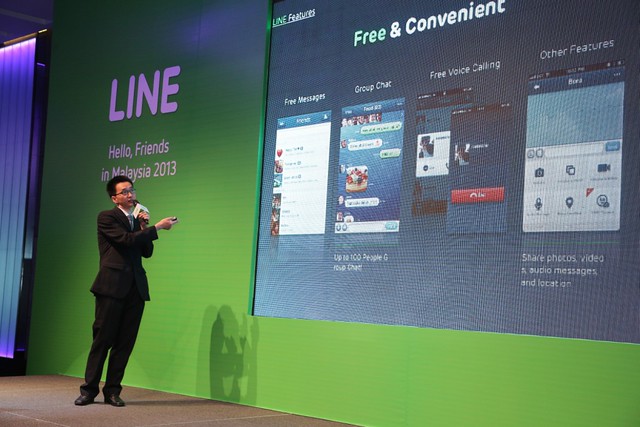 In Malaysia, LINE now supports Nokia’s S40 platform and also comes preloaded on Nokia’s Asha smartphones. This is in addition to iPhone, Android, Windows Phone and Blackberry devices – making LINE a truly cross-platform app and bringing its goal of the Smartphone Life Platform closer to reality. 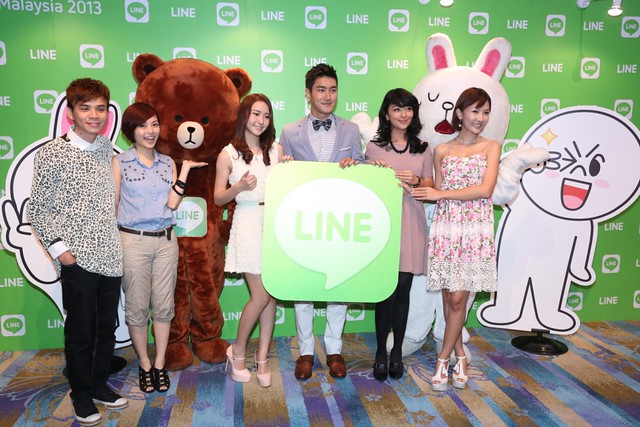 “Our goal has always been to create a true Smartphone Life Platform, used by everyone around the world. Today marks the continuation of that effort, by growing our user-base in Malaysia. We truly believe that LINE will soon become the most popular mobile messenger with the best localized features and services for Malaysian users,”

LINE’s tailoring of its offerings for the Malaysian market comes shortly after a strategic internal reorganization which will allow it to better react to the rapidly changing global mobile market. LINE now falls under the banner of LINE PLUS which serves its vision of becoming a young and fresh lifestyle brand. LINE has proved itself as a top mobile platform amongst users, with over 130 million users across 231 countries in Asia, the Americas, Europe and Africa. Previously, LINE operated under the NHN Corporation. 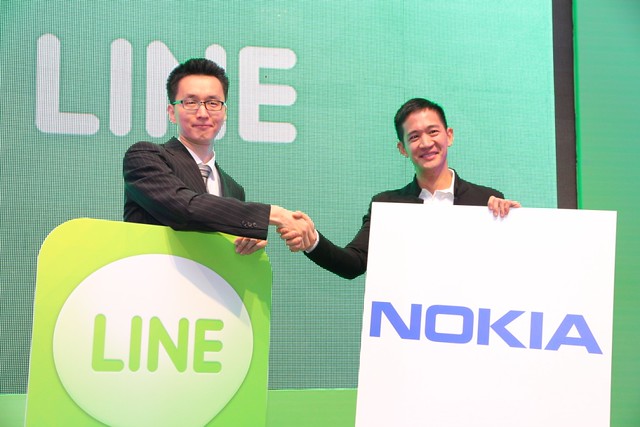 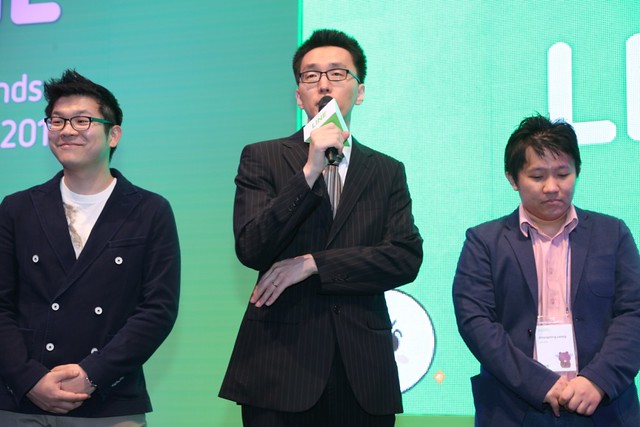 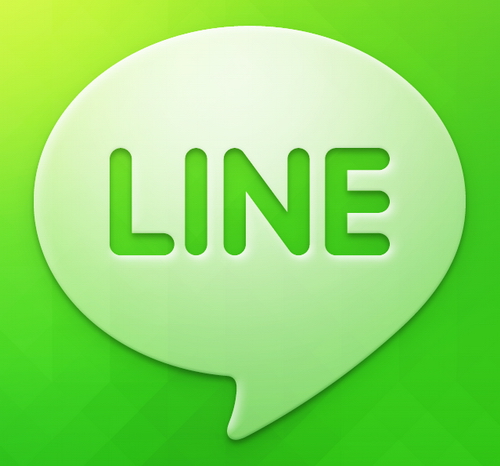 About LINE
LINE is a smartphone app which allows users to enjoy free calls and messages to one another, both nationally and internationally, regardless of which mobile network provider they are using. Launched in June 2011 by NHN, LINE has more than 130 million users worldwide. It has also been ranked no. 1 in 43 countries in the free app category including Japan, Singapore, Hong Kong, Taiwan, Thailand, Malaysia, Macau, Saudi Arabia, Kuwait, Bahrain, United Arab Emirates, Qatar, Jordan, Israel, Switzerland, Turkey, Ukraine, Cambodia, Kazakhstan, Russia, Belarus and Latvia. LINE carries various unique features such as ‘instant translation service’, ‘Official Accounts’ that enables users to interact with famous public figures, ‘Timeline and Home’ to share recent updates with friends, ‘Shake it’, a fun way of exchanging ids and many ‘Emoji/Stickers/Emoticons.’ For more information visit: http://line.naver.jp/en/.

About LINE PLUS
LINE PLUS, the world’s leading mobile platform innovator, is a joint-venture entity between NHN Corporation and NHN Japan newly organized on March 1st, 2013. As a global smartphone life platform provider, LINE PLUS services LINE and its family applications to bring together innovative mobile messaging tool and new communication lifestyle. LINE PLUS was created to promptly react to the rapidly changing mobile messenger market and to strengthen its global business based on the industry expertise of its parent company furnishing a wide range of innovative and convenient online services along with optimized decision making structure, personnel system and organization culture.
LINE PLUS is located in Seoul, Korea.
For more information, please visit http://www.nhncorp.com/nhnen/index.nhn

For more information on LINE

LINE offers not only basic services including free messaging, voice calling and group messaging with up to 100 people, but also value-added elements such as Stickers to enhance the communication experience by incorporating emotions. There are more than 4,000 stickers in which users can utilize while chatting to share realistic and vivid emotional expressions to invigorate conversations.

Other important elements of LINE include Home & Timeline, a personal space where users can share their life stories by posting pictures, videos and location information, and Official Accounts in which users are able to communicate and receive exciting content from their favourite celebrities, public figures and corporate brands on a real-time basis.

Moreover, LINE allows users to enjoy these various features anywhere with any device. LINE is not only available for use on smartphones but also on various devices such as PCs and tablets. It is a cross platform communication service that supports various OS such as iOS, Android, Blackberry, and Windows.

As a ‘Smartphone Life Platform,’ LINE is always adapting and releasing something new to move beyond being just communication tool, which is evident through its plethora of family brands. Details of its most popular LINE family apps are as follows:

LINE Games: Integrated with LINE messenger to enhance interaction with friends and foster friendly competition as users can compare rankings. Over 20 LINE games have achieved a total of 100 million registered players worldwide (as of March 2013).

LINE PLAY: Offering unparalleled joy by allowing users to personalize avatars and a virtual space, while making new friends with similar interests and hobbies. Optimized for mobile use, LINE Play not only brings a dynamic virtual world to life, but presents a boundless place where people can meet and share thoughts with others.