Lionsgate and the filmmakers of NURSE 3D are pleased to announce that Paz de la Huerta (Boardwalk Empire, Enter the Void) will star in the film as Abby Russell, a beautiful, dedicated nurse with a sinister side, and a secret life’s work in which she targets and punishes dishonest men.

The studio today debuted gripping pre-production concept art of Paz de la Huerta in character as Abby. Shoy by Lionsgate’s Chief Marketing Officer Tim Palen, it will be serve as a style guide and character inspiration for all stages of filmmaking. The story was originally inspired by previous photography of horror tastemaker Palen, who explored the intersection of caretaking and punishment in an ongoing series of fine art photographs of beautiful, fantastical nurses used by the studio. 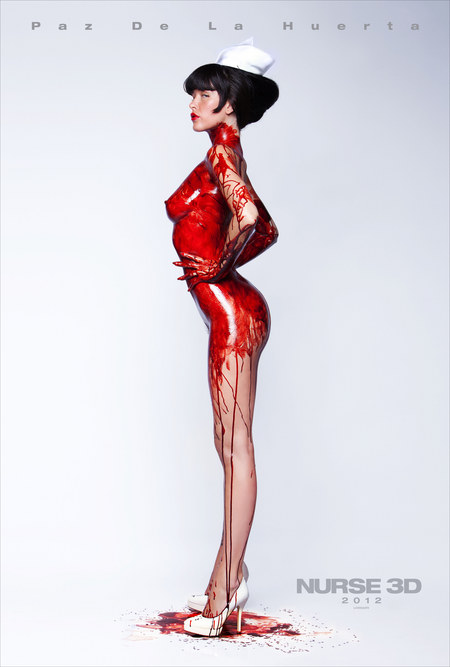 The film is to be directed by Douglas Aarnoikoski, who brings a wealth of experiences as a first assistant director on high profile productions such as Fear and Loathing in Las Vegas, Spy Kids, Takers, and Resident Evil: Extinction, and who also directed the forthcoming feature film The Day. Principal photography on the film will begin on 6th September in Toronto.

“In his original nurse photos and the fan conversation that ensued, Tim had clearly scracted the surface of a really great concept – the idea of a film noir depiction of a beautiful nurse who uses her sexuality to very severe ends,” explained Mike Paseornek, Lionsgate’s President of Production and the executive in charge of the film. “That concept was the perfect germ for this thrilling story, which will be extremely visceral in 3D.”

Added Palen, “Paz is the perfect actress for this role and has already been such an inspiration to the whole project. She brings an intensity and a sense of adventure to this role that is so promising.” He continues, “We learned from the success of My Bloody Valentine 3D that there is a real interest in what 3D filmmaking can add to risqué scenes in R rated films, and this film will deliver those scenes to audiences in a really sophisticated, artful way.”