[dropcap]D[/dropcap]on’t forget to catch the premiere of Mudcats beginning 7 May 2013 at 9.00pm exclusively on National Geographic Channel (Astro Ch 553) and thereafter every Tuesdays at the same time.

Deep in the heart of America, an age-old tradition has given way to a fierce competition of brains, brawn and guts … the Okie Hand Fishing Invitational. For ten weeks, teams hunt for colossal flathead catfish using only their bare hands. With bragging rights, a USD $2,000 weekly prize and a USD $10,000 grand prize on the line, it is an all-out battle to bring home some massive fish. National Geographic Channel’s (Astro Ch 553) new series Mudcats, premieres 7 May 2013 at 9.00pm and thereafter new episodes every Tuesdays at the same time, literally dives into the murky waters of hand fishing.

Defending Champion Scooter Bivins, his gritty nemesis Marion Kincaid, young Teddy Good and trash-talking Don “Katt Daddy” Brewer are determined to take care of unfinished business. But there is one new competitor on the water who could change everything—hand-fishing royalty Lee “The Legend” McFarlin has entered the fray. Following the five teams competing in the invitational, we see exactly what it takes to shove a hand down the throat of a prehistoric monster and wrestle it out of the water. NGC cameras both on land and underwater capture the thrill of the hunt as the fishermen, or “noodlers”, scour brush piles and rock formations with only their hands and feet, in the hopes of locating a catfish lair. 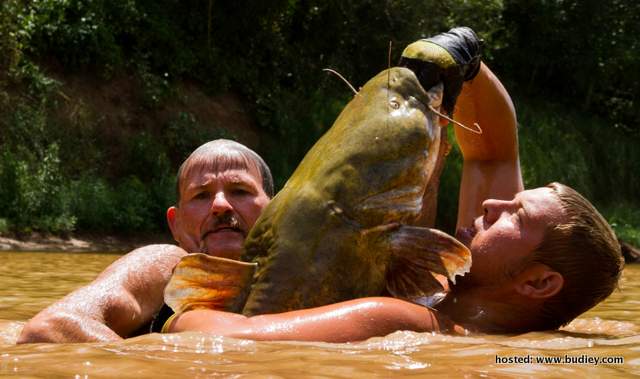 The risky technique may sound insane, but that is why the mudcatters fish in pairs. One noodler dives under water to depths reaching six metres to drag a catfish out of its cave, while the spotter waits above to string the beast and intervene if things get out of control. The danger can be as deep as the water, as viewers will see when a rookie nearly drowns trying to drag a flathead out of a hole 4.5 metres under water.

Hand fishing is more than a hobby for these fishermen; it is a rite of passage that has been passed down for generations. Many of these men, and in one case a woman, have been taught by their grandfathers and fathers, and it is a tradition they will one day pass down to their own families.

With cash on the line and five of the best grabblers out to get it, it will all come down to strategy, experience and sheer guts.

Meet the Mudcats:
Don “Katt Daddy” Brewer is the larger-than-life, tattooed trash talker of the group. Together with long-time friend Dennis Williams, the tough-as-nails duo plans to dominate the competition this season.

Teddy Good and his cousin Winston Walters are the young competitors. As the next generation of hand-fishermen, they have a lot to prove to their competitors and their ancestors.… Teddy learned to noodle from his great-grandfather, and Winston fishes the same rivers his ancestors once did.

Scooter Bivens is the Okie Invitational’s defending champion—hailing from a family known as hand-fishing royalty. This season, Scooter is fishing with Nate Williams, a rookie with a lot to learn about handfishing.

Marion Kincaid, “The Catfish King” and his high-school buddy Mark Shull are Harley-riding, rough-and-tumble kind of guys, with a motto “If you ain’t bleedin’, you ain’t hand-fishin’.”

“The Legend” Lee McFarlin is a hand-fishing master with more than 40 years of experience, and a heavy favourite to win it all. He has been teaching his daughter the ropes since she was a little girl, and now Misty Garcia is his fishing partner.

Be sure to watch the premiere of Mudcats beginning 7 May 2013 at 9.00pm exclusively on National Geographic Channel (Astro Ch 553) and thereafter every Tuesdays at the same time.

In the heartland of America, five of Oklahoma’s toughest hand-fishing teams are back on the hunt for colossal Flathead catfish. It’s the first week of the ten-part Okie Invitational Tournament, and this year, there’s more at stake than ever before. Each week, the hunter to bag the heaviest fish wins $2,000. At the end of ten weeks, a grand prize of $10,000 goes to the team with the heftiest fish of the entire season. Last season’s Invitational winner, defending champion Scooter Bivins knows he’s got a target on his back. And with a brand new partner, he’s got his work cut out for him. Scooters biggest rival, Catfish King Marion Kincaid is determined to steal this year’s crown, vowing to catch the heaviest fish of the entire season, and secure the $10,000 bounty on day one.

The pressure is on for the five grabbling teams to win this weeks $2000 cash prize, and partnerships are more important than ever. Tough talking Don “Katt Daddy” Brewer has yet to win a tournament, and this week, he’s determined to change that. But Katts partner, Dennis, succumbs to every grabblers worst nightmare – an ear infection. Now Katts on his own. Catfish King Marion Kincaids in the lead for the $10,000 grand prize. But right off the bat, he lands in crisis – his dog and best friend Jesse goes missing. Marion has to choose: keep fishing for the tournament, or drop everything and search for his best friend.

Mudcats: Raising Hell (21 May 2013 at 9.00pm)
It’s week three of the Okie Invitational as the five hand fishing teams battle to win the $2000 cash prize. Don “Katt Daddy” Brewer is going where no other grabbler would dare – fishing a dangerous area strewn with hundreds of razor-sharp hooks. But he ends up paying for his bravado… in blood.

Mudcats: Midnight Monsters (28 May 2013 at 9.00pm)
It’s week four of the Okie Invitational. Hoping to keep their winning streak going, defending champ Scooter Bivins and his new partner, Nate, head to one of Scooter’s most secret honey holes. But as they approach the hidden spot, they see someone is following them. Out to clobber his rivals, Don “Katt Daddy” Brewer catches one of the biggest fish of his life. He ties it up in the lake for safekeeping, but when he returns, his monster fish is gone. 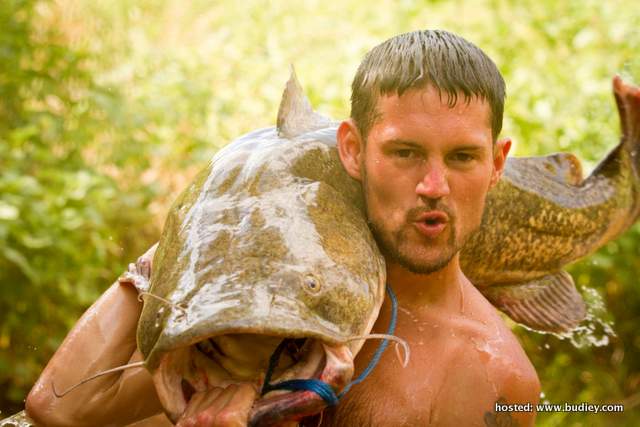 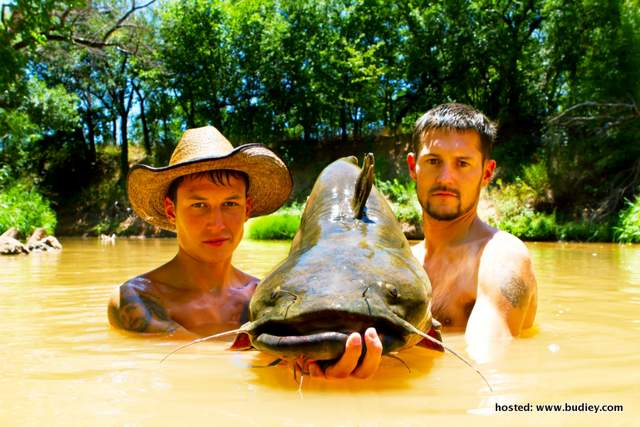