NESCAFÉ Cans together with Shaheizy Sam today showcased the much-anticipated single ‘Bangun’ to media and 20 lucky fans. The single, resulting from the ‘People Powered’ Nescafé on Sam campaign, was inspired by the 50,000 inspirations submitted by Sam’s fans during the campaign period. Nescafé Cans has created this opportunity for Shaheizy Sam to work with the renowned composer and producer Audi Mok, the single – featuring local artist Liyana Jasmay, marks Sam’s return to the recording studio. 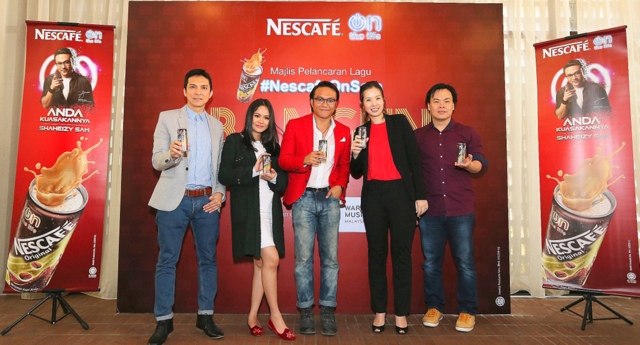 Via the Nescafé on Sam campaign, NESCAFÉ Cans helped realise Shaheizy Sam’s musical dreams and further connected him with his loyal fan base both online and offline. The actor-singer had long wanted to return to the recording studio, spurred by enthusiastic encouragement from his fans. The campaign enabled Sam’s fans to forge a closer connection with their idol, through the collaborative nature of the Nescafé on Sam project, where his fans were encouraged to contribute to the lyrics for the new single, by submitting inspirations on Facebook, YouTube and Twitter.

Shaheizy Sam Wakes The Nation Up With His Latest Single. Much-anticipated people-powered single created from Nescafé On Sam campaign

“This is truly a Malaysian campaign. Inspired, written, produced and sung by Malaysians for Malaysians, the single ‘Bangun’ is a truly Malaysian song resulting from the truly Malaysian Nescafé on Sam ‘People Powered’ initiative. This has also inspired the NESCAFÉ Cans team to look at enabling more unique and engaging activities to connect with fellow Malaysians,” said Jasmmine Wong, Business Executive Manager, Nestlé Liquid Drinks Malaysia and Singapore.

“NESCAFÉ Cans is delighted to have the opportunity to enable the growth of Shaheizy Sam’s music career through the Nescafé on Sam campaign. As a true fan of NESCAFÉ Cans, this collaboration has personal meaning for Sam, thus we readily clicked right from the start. It was an honour to make the continuation of Sam’s musical journey possible, and we hope that this single will gain airplay, besides garnering many views on YouTube with the help of Sam’s fans and Warner Music Malaysia. I’m also glad that NESCAFÉ Cans was able to harness the creativity of Malaysian youth – looking at the 50,000 inspirations received within a span of just 2 months,” she added. 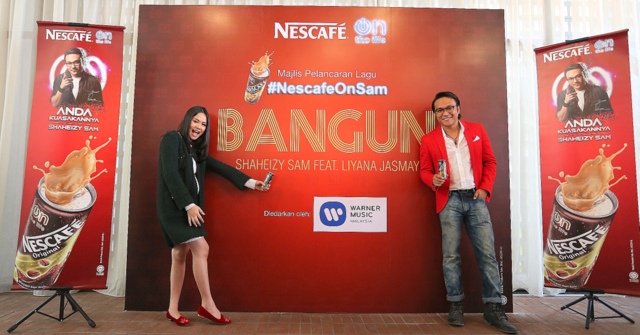 Jasmmine expressed, “This campaign has proven the value of the ‘People Powered’ and also the effectiveness of social media in spreading the word and gathering this ‘People Power’ together. Sam’s dedication to communicating with his fans in the digital space throughout his music-making journey has had great impact in driving them to participate in the Nescafé on Sam campaign, resulting in the extraordinary response seen online.”

Publicity for the Nescafé on Sam campaign was driven both online and offline, using unique engagement activities that reached out to Malaysians from all walks of life. Throughout his journey, Shaheizy Sam actively engaged with his fans through roadshows organised in conjunction with the campaign and through his various social media channels.

“NESCAFÉ Cans is a brand personally significant to me – those close to me will undoubtedly recall that I’m a long-time fan of the drink. I am grateful that NESCAFÉ Cans has helped me make my music comeback. It has been a wonderful experience – I was so excited to work with a brand that brings me enjoyment and fond memories. This campaign has given me the opportunity to connect even more closely with my fans. I would like to thank everyone who shared their inspirations and contributed to bringing this single to life. I really appreciate their unflagging support all these years and I hope to continue being active in the local entertainment scene, be it through music or movies, and producing works that they will enjoy,” Shaheizy Sam said.

Fortifying the credentials of the single, NESCAFÉ Cans brought in Audi Mok as producer and added the vocals of the lovely Liyana Jasmay to complement Sam’s voice and musical talent. The song – an upbeat fusion of hip-hop and POP – captures Shaheizy Sam’s cheerful and joyful outlook as he wakes up to a brand new day. NESCAFÉ Cans and Sam’s fans have truly inspired him to look beyond the mundane and reach for his dreams, resulting in an amazing song and video.

To check out Shaheizy Sam’s latest music single ‘Bangun’, just surf over to YouTube and search for Bangun – #NescafeOnSam.