Jessie Chung Feted by Indonesian Officials with a Magnificent Banquet

Music Box, the magnum opus of Jessie Chung’s theatrical career, was recently brought to perform in Indonesia. Upon arrival, the Indonesian government held a lavish banquet to welcome its guests, kicking off the cultural exchange event between Malaysia and Indonesia. The theme of this cultural exchange event is “Three Cultures and Two Countries”, with the two countries being Malaysia and Indonesia, and the three cultures being the cultures of Malaysia, Indonesia, and Australia. 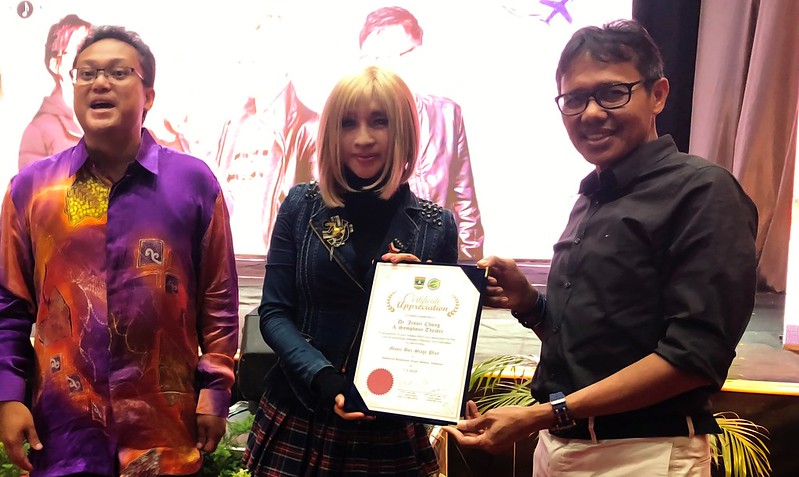 The Music Box crew touched down at Minangkabau International Airport in Padang, Indonesia, and was taken to the Governor’s Office of West Sumatra by a police escort to attend a banquet. The Governor of West Sumatra Irwan Prayitno, Deputy Governor Nasrul Abit, Minister of Tourism, and the Governor’s wife were also present. At the banquet, the Governor even went on stage to perform a few songs, showing his sincerity for and the significance of this cultural exchange event between Malaysia and Indonesia.

During his speech, the governor stated that due to its outstanding performance, Music Box has received the government’s support and was chosen to represent Malaysia in the form of theatre via Malindo Business & Cultural Center (MBCC) in this cultural exchange with Indonesia’s cultural department. He also stated that he is honored to have the opportunity to invite Jessie Chung to participate in this cultural exchange between “Three Cultures and Two Countries”, allowing the Indonesian people to broaden their horizon and enjoy an array of songs and performances from Australia.

Music Box was performed at the auditorium of Universitas Negeri Padang, attended by the Governor of West Sumatra province, Irwan Prayitno, the Minister of Tourism, 19 mayors in West Sumatra, many high-ranking officers of the Navy, Army, and Airforce, the chancellor and vice chancellor of the university, and students of the university. Around 2000 theatregoers attended this colossal stage play.

Director Brian Choot stated, during this stop of the Music Box international tour, they all felt the sincerity of the Indonesian government through the hospitality and treatment toward guests; everyone felt like they were being put on a pedestal and pampered. What came as a surprise was that from the first scene to the last scene of the stage play, the Indonesian audience cheered all the way through to show their appreciation and enthusiasm. As the story climaxed, the audience showed even more passion through their applause. When asked about the audience’s reaction, the director chuckled and stated that he regarded them as the “most responsive crowd” of all time as they too were very dramatic and expressed their emotions freely while they rode along the twists and turns of the plot.

After the curtain call, Jessie Chung immediately transformed into the Princess of Rock, partying all the way till midnight with her Indonesian fans. That night, Jessie Chung performed “Sinaran”, “Drive My Heart”, “Be Strong”, and “Feel My Love”, wishing the Padang government good luck and a prosperous future. As she sang and danced to the music, the hotblooded crowd was ablaze with excitement, and the Governor and Minister of Tourism were also thrilled to watch the show as their faces lit up with joy.

The next day, the Indonesian government chose a few mayors to bring the Music Box crew to many tourist attractions, introducing them to the famous Minangkabal culture in Padang, taking them on a visit to a palace in Padang, and inviting them to dine together, further encouraging the cultural exchange between Malaysia and Indonesia.

So far, Music Box has completed 13 sold-out shows. To this date, the organizer has garnered over 1,000 video reviews from the audience, receiving an overwhelming collection of positive reviews. Many celebrities, artists, experts of various fields, and governmental staff also gave their positive comments to the stage play. Fans from Malaysia and all across the world, including China, the United States, Taiwan, Hong Kong, South Korea, Japan, and Thailand came to witness the spectacular show.

Under meticulous production, the English version of Music Box, tailored to international audiences, was born. In addition, the production team will also translate the surtitles to various languages, including Malay, Thai, Tamil, Japanese, Korean, etc. to cater to a wide variety of audiences.

The stage play Music Box is an event that fundraises for cancer patients and passionately promotes and propagates a positive message throughout society. The production team and organizer’s desire is that many philanthropic individuals will eagerly support this meaningful event. The itinerary for Music Box is as follows: