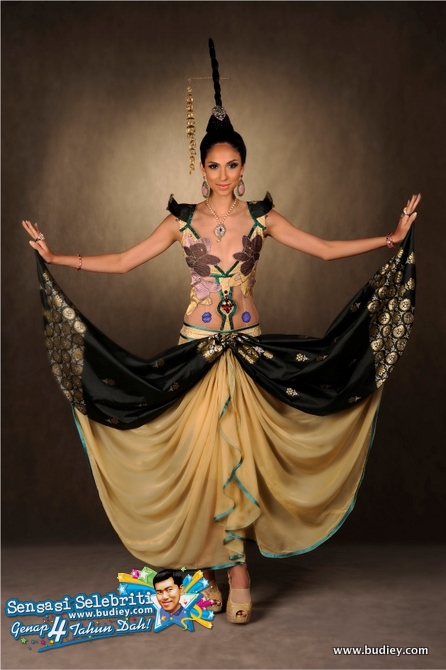 “In September we’ll see Deborah Henry taking our nation’s pride to Sao Paulo, Brazil as she meets and competes with the world’s most beautiful women at Miss Universe 2011. She’ll be well provisioned for her trip as she will be bringing her wealth of experience as an international model, television personality and celebrity; MUMO’s combined creativity and an amazing national costume by esteemed Malaysian designer Amir Luqman of amirluqman with her,” said Miss Universe Malaysia Organisation National Director, Andrea Fonseka.

In addition to that, September will also see the debut of “BeautyCamp: The Search for Miss Universe Malaysia 2012“ (“BeautyCamp”) on a local television channel. This is part of the change to the pageant that sees the Malaysian candidate appointed this year for the 2012 Miss Universe event.

“This is the first time that any country in South East Asia has used a reality television show as part of the selection process for a Miss Universe candidate and it is definitely the first time any pageant of this caliber has tried it here. The fact that we will also be broadcasting the Gala Night and revelation of the Miss Universe Malaysia 2012 candidate on 10 November 2011 LIVE is another historic milestone for the pageant and the country,” enthused Fonseka.

BeautyCamp – Not Your Everyday Bootcamp
BeautyCamp represents a new format of programming for Malaysian television and one of the few times that reality television programming has been used in conjunction with the Miss Universe pageant anywhere in the world.

“We wanted Malaysians to identify with and support their Miss Universe Malaysia candidate. The most effective way to accomplish this is to bring the potential winners into their homes every week for them to know and vote for them,” said Fonseka.

The show, which will begin broadcasting in September 2011 and run until November 2011 through one-hour episodes, will culminate in a two and half hour LIVE broadcast of the Gala Night where the winning Miss Universe Malaysia 2012 candidate will be crowned. Details on the show, its challenges, the expectations of the girls who participate and what viewers can win will be revealed in the coming weeks.

“We selected the final list of just under 30 girls from over 1,000 candidates who signed up at our road shows. The road shows – which travelled around the country – were a great first step and they allowed us to better appreciate some of the amazing beauty and talent we have out there. After a fiercely fought audition process, the final list of candidates was selected for their intelligence, beauty, spirit and that special fire that we spotted in their auditions. We hope Malaysians see these special girls for what they are – ambassadors of the country, the people and the brands that make up our wonderful nation,” Fonseka said.

Sponsors that were revealed at the press conference included:

In addition to that, strategic partners to date include:

The Wau Factor
The quintessential WAU BULAN of our northern states inspires the national costume for Miss Universe Malaysia 2011, Deborah Henry. A true Malaysian art form, it has – from its origins around Asia – become a localized symbol of creativity, design and refined elegance.

“The Wau has come to be an artistic object which is judged solely for its beauty, intricate designs, combination of colours, and the neatness of the workmanship. All the major elements of this intricate and graceful art form that is as functional as it is beautiful have been incorporated into the National Costume for Miss Universe Malaysia 2011,” said Amir Luqman.

Songket, which is used extensively in the design, is a rich and luxurious fabric that has been traditionally hand-woven in silk or cotton yarns by rural Malay women in Malaysia for more than two centuries. It uses an intricate technique whereby groups of metallic weft threads are interwoven with weft and warp threads of the background, providing a contrast in both colour and texture.

“Songket-weaving is a laborious and tedious process that requires a high degree of concentration from the weaver, resulting in a work of art that reflects the weaver’s artisanship and skills. This accurately represents the intricacy, effort and beauty of our Miss Universe Malaysia 2011, Deborah Henry,” Amir Luqman added.

The whole piece in the end forms an understated and elegant “Wau Bulan” that goes from head to toe.

The traditional-design inspired dress will also see the use of precious gemstones sponsored by Mogok Jewels. These consist of rare pigeon-blood rubies, emeralds and topaz. Mogok Jewels by Maizura Mahathir and Zin Oo Ko are the official jewelers for the “National Costume – Miss Universe Malaysia 2011.”

For more information on the Miss Universe Malaysia Organization please visit www.missuniversemalaysia.com.my. You can also follow us online via Twitter at MissUniverseMY and Facebook at www.facebook.com/MissUniverseMalaysia.