AXN announced today that the Philippines-based TV personalities Marc Nelson and Rovilson Fernandez will reunite once again on the channel as hosts of the inaugural season of the talent search series “Asia’s Got Talent,” set to launch this March. 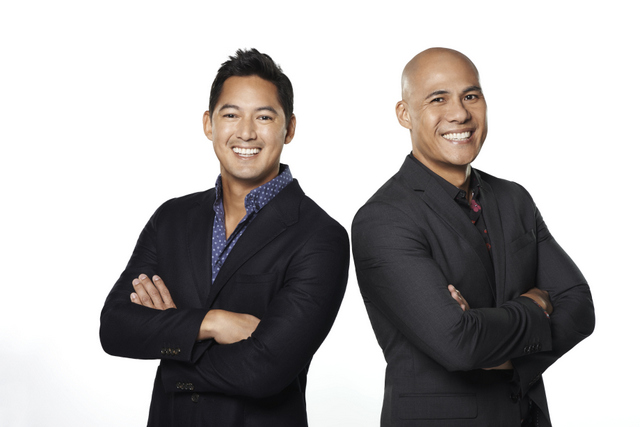 Nelson and Fernandez will support the four previously-announced celebrity judges — David Foster, Anggun, Van Ness Wu and Melanie C. — in their search for Asia’s most jaw-dropping, mind-blowing, and breathtaking performances. Contestants who advance to the semi-finals will face an even tougher judge, as AXN audiences at home will decide who wins the first season of “Asia’s Got Talent.”

Hui Keng Ang, Senior Vice President and General Manager, Sony Pictures Television Networks, Asia said: “As competitors on the second season of ‘The Amazing Race Asia,’ Marc and Rovilson captivated viewers with their on-screen charisma. We saw them as a natural fit to host a show like ‘Asia’s Got Talent’ and are proud to have them back on AXN.”

Paul O’Hanlon, Managing Director of FremantleMedia Asia, said: “In addition to their years of experience, Marc and Rovilson bring an incredible energy that will encourage and motivate the contestants. They complement our panel of judges perfectly and we look forward to working with them in the season ahead.”

George Levendis, Head of International for Syco Entertainment, said: “Marc and Rovilson are about to take us on a fantastic ride across Asia. We welcome them both to the ‘Got Talent’ family and look forward to them bringing their warmth, wit, humour and magnetism to this unique production.”

Nelson and Fernandez burst onto the scene in 2007 on AXN’s “The Amazing Race Asia,” where the best friends held pole position for a record length of the race, from the second to the eighth episodes, ultimately reclaimed the lead during the penultimate episode. From there, they hosted “The Duke,” AXN’s original talk and lifestyle magazine show that profiled some of the most successful men in the region.

Both continued to build their respective careers. Nelson hosted ABS-CBN’s “Sports Unlimited,” and appeared with Fernandez in QTV 11’s “Dare Duo.” Fernandez, who has served as an editor of Maxim men’s magazine in the Philippines, currently hosts his weekly countdown show “Ang Pinaka” on GMA News TV.

Nelson said: “It is an honor and a privilege to host ‘Asia’s Got Talent,’ the biggest talent competition in the world, and to do so with Rovilson is a bonus. We look forward to working with the judges as well as setting the stage for the incredible contestants to shine.”

Fernandez said: “I am humbled to play a part in this great search for talent across our region. With Marc, we will do our best to bring our amazing experience on ‘Asia’s Got Talent’ to AXN viewers.”

The Guinness World Record-breaking hit “Got Talent” format, which was created by Simon Cowell’s Syco Entertainment and is co-produced by FremantleMedia, is launching its 63rd version on AXN. Billed as the biggest talent competition in the world, the show will dazzle audiences across Asia and spotlight some of the region’s most amazing performing artists competing for the coveted winning title. “Got Talent” is officially the most successful reality TV format in history and currently airs in 186 countries.

As previously announced, the inaugural season of “Asia’s Got Talent” on AXN is proudly presented by Marina Bay Sands, BIG Cola, Pantene, Caltex and Jetstar.

BIG is the exclusive beverage partner of “Asia’s Got Talent.” With BIG Cola, ‘if you can dream it, you can do it.’ Contestants and fans across Asia will be encouraged to ‘think big’ and ‘dream bigger’ in pursuit of their dreams.

Pantene, the exclusive haircare partner of “Asia’s Got Talent,” makes hair stronger inside and shinier outside to enable contestants to shine and be the world’s number one talent.

Caltex is the exclusive petroleum partner of “Asia’s Got Talent.” Caltex delivers a hassle-free experience to get people back on their journey quickly, so they can have more time and energy to do whatever matters most to them. By being a part of “Asia’s Got Talent,” Caltex wants to celebrate key moments of the contestants’ journey to stardom, providing viewers the opportunity to enjoy the journey with them.

Jetstar is proud to be the official airline of the very first edition of “Asia’s Got Talent.” With more than 600 weekly flights to 22 destinations across 13 countries in Asia Pacific, Jetstar enables talent to fly further, connect with families and fulfil dreams.

About FremantleMedia Asia
With offices in Singapore, Beijing, Bangkok, Jakarta, and Mumbai, and servicing the entirety of Asia, FremantleMedia Asia is one on the preeminent production companies in the region, producing world-class content from the large scale talent competitions for which it is best known, including Idol, X Factor, and Got Talent, to long running game shows such as Family Feud. In addition to creating and developing local content, FremantleMedia Asia is no stranger to localization and is uniquely positioned as one of the most accomplished adaptors of international formats in the region, ensuring continuing success season after season in territory after territory. Beyond single market productions, FremantleMedia Asia has also demonstrated its strength in pan-regional production having recently produced the widely successful The Apprentice Asia.

About SYCO Entertainment
Syco Entertainment is a joint venture between Simon Cowell and Sony Music and is one of the world’s leading global music, film and television production companies responsible for some of the world’s most successful global TV and music franchises. Syco Entertainment is also the world’s most successful producer of international talent with Syco Music being the UK’s number 1 record label for both A&R and sales and is record label home for such diverse international recording artists as Labrinth, One Direction, Susan Boyle, Little Mix, IL Divo, Fifth Harmony, Alex & Sierra and Ella Henderson. Syco’s television assets include the global franchises The X Factor and Got Talent. Local versions of The X Factor are produced in more than 53 territories, with artists discovered by the format selling more than 180 million records worldwide, including 200 number ones and 380 top 10 records. The Got Talent format is officially the world’s most successful reality TV format of all time, holding the Guinness World Records title for the “Most successful TV format of all time” having been commissioned in an impressive 66 territories worldwide. America’s Got Talent also airs in 193 countries around the globe and has been the #1 US summer reality series for the pass decade. Syco Film produced the 2013 #1 global box office hit ” One Direction: This Is Us” a 3D concert movie with Sony Pictures and have recently partnered with Animal Logic (The Lego Movie, Happy Feet) to produce a number of music-based hive action-hybrid animated movies.

More From: Asia's Got Talent