30th May 2011, Sepang: Catch amazing performances from the world of music and theatre this June from the realms of K-Pop, Indonesia, Europe and West End production LIVE in Kuala Lumpur, Malaysia with AirAsiaRedTix.com – the only source of tickets to international world-renowned entertainment.

The hottest act to come out of Korea recently is the triple threat – actor, singer and model Jang Keun Suk. Commonly referred to as JKS by his fans, this will be the Korean pop-star’s first ever showcase in Malaysia.

Known for her energetic performances on stage, famous Indonesian singer Rossa will lend her talents for a good cause over a 2-night gala charity event.

Those who grew up loving musicals will find much joy in the aptly titled Magical Musicals – a West End musical production which combines songs from the most popular and loved musicals of all time, including Moulin Rouge, West Side Story, Mama Mia!, Fame and award-winning musical TV series, GLEE.

Add a mid-year dance party to the mix with VELOCITA – where 3 of the world’s most wanted DJs will each spin their unique brand of heart thumping and uplifting trance. Expect the first ever VELOCITA dance party held at the Sepang F1 track to transcend your senses and fuel your musical soul. 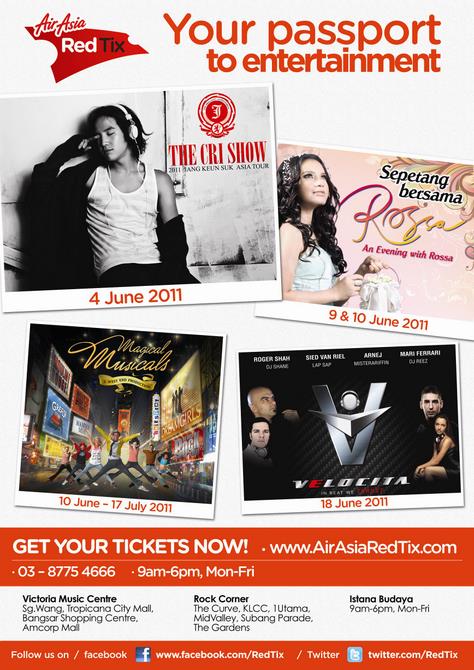 Jang Keun Suk
4th June, 5:00pm
Plenary Hall, Kuala Lumpur Convention Center
Jang Keun Suk, 24, is one of Korea´s most famous actor, singer, model, dancer and DJ. He experienced his very first career at the age of 5, as a kindergarten catalogue model where he was discovered by a talent agent.

Jang Keun Suk made his acting debut in the 1997, family sitcom “Selling Happiness” and later branched out into singing when he was featured on the songs of the dramas that he acted in.

An Evening With Rossa
9th & 10th June, 8:00pm
Grand Ballroom, Tropicana Golf & Country Resort
“An Evening with Rossa” is an exclusive gala charity event. The 2-night dinner concert is created as an outreach event to tap into unity, love and peace through music in light of recent tragic world events.
Fans will be treated to an exquisite 8-course dinner prepared from Tropicana Golf & Country Resort Grand Ballroom, while the Indonesian singing sensation will amaze you with her captivating performance.

Magical Musicals
10th June – 17th July
Monday to Thursdays, 7:00pm
Friday to Sundays, 7.00pm & 9.30pm
The Amphitheatre @ Sunway Lagoon
The show opens in Times Square, New York – the very heart of the Broadway Theatre District. Auditions are being held for a new show. Six budding actors leave the auditions and are all in New York for One Night Only. The musical production is directed by Chris Colby – an Artistic Director of the Theatre Royal, Lincoln for 10 years. David Kort (who appeared in the West End production of Peter Pan and also worked for the prestigious Glyndebourne Festival Opera) will be choreographing the musical. Fans of West End definitely will not want to miss out on this.

Tickets for the above events can be purchased online at AirAsiaRedTix.com.

To satisfy customer’s demand for entertainment, Asia’s largest low-cost carrier is committed at offering a full travel experience. AirAsiaRedTix.com was incepted and is positioned as the world’s ultimate gateway to international music and entertainment events – summed up in its tagline, “The Passport to Entertainment”.

For the most updated events line up on AirAsiaRedTix.com, be our Fan on Facebook.com/AirAsiaRedTix and follow us on Twitter.com/RedTix.

About AirAsiaRedTix.com
AirAsiaRedTix.com is the hottest, smartest new way to discover, discuss, review and book tickets to an international line-up of concerts, sporting events, musicals, theatre performances and more. A subsidiary of Asia’s largest low-cost carrier, AirAsiaRedTix.com partners premier event organizers and promoters in Asia and across the globe to offer customers a platform from which to leap into an exciting world of top-notch entertainment. Make bookings online and have electronic tickets issued and emailed to you or sent to your mobile phones – so waiting in queue is a thing of the past! Connect with other fans and enthusiasts in online forums to share your views, reviews and recommendations on anything from sports to music to the arts.