Universal Networks International has secured the format rights to create an Asian original of Hot Guys Who Cook to be broadcasted on its female-focused entertainment channel, DIVA Universal.

The series will be co-produced with NBCUniversal International Television Production and feature six half-hour episodes to air in June 2012 on DIVA Universal across 20 countries in Asia.

Hot Guys Who Cook is a deliciously offbeat cooking show, which originally aired on Style in the US. Audiences will get up close and personal in the kitchen with 18 hot guys from all around Asia. Each week, three hot men show off their cooking skills in an attempt to whet audience’s appetites. They each prepare a signature dish under seven minutes, whilst sharing stories about the recipes and their lives.

David Gunson, Vice President of Channels, South East Asia, Universal Networks International says, “DIVA Universal viewers can’t get enough of the original, high-quality programming that we are investing in for the channel and we can’t wait to introduce our audience to Hot Guys Who Cook — our newest series that is, quite literally, hot. We are certain it will resonate with our female viewers.”

Yvonne Pilkington, Senior Vice President, Production and Format Sales, NBCUniversal International said, “Hot Guys Who Cook brings together women’s two guilty pleasures, beautiful men and food, and the format is perfect for DIVA Universal’s female audience. This is the first international version of the format and we look forward to working with Universal Networks International to tailor the series for the Asian audience.” 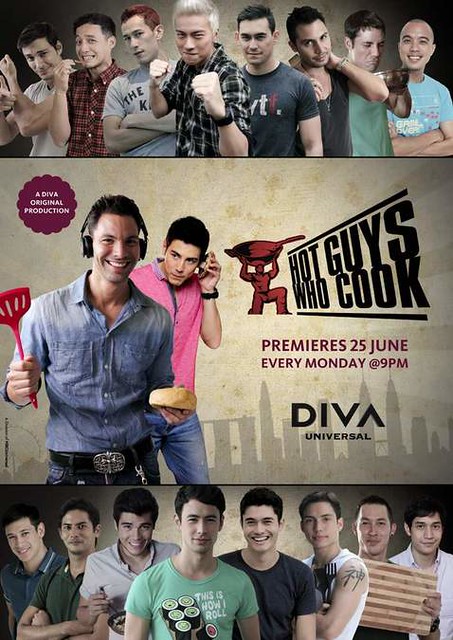 The portfolio includes the brands – Syfy, Universal Channel, DIVA Universal, Studio Universal and 13th Street Universal and now, with the acquisition by Comcast Corporation, E! Entertainment Television, The Style Network and Golf Channel. These brands deliver a full range of entertainment experiences to local audiences across the globe. Universal Networks International also operates Movies 24 and has an interest in the KidsCo joint venture.

Universal Networks International is part of NBCUniversal, one of the world’s leading media and entertainment companies in the development, production, and marketing of entertainment, news, and information to a global audience. Comcast Corporation owns a controlling 51% interest in NBCUniversal, with GE holding a 49% stake.