MTV and Tourism Promotions Board Philippines Collaborate For the First-Ever MTV Music Evolution in Manila.  One of the Biggest  Concerts in Asia Expected in 2015

Viacom International Media Networks (VIMN) Asia, a division of Viacom Inc. (NASDAQ: VIAB, VIA), announced today that MTV has entered a brand new collaboration with the Tourism Promotions Board (TPB) of the Philippine Department  of Tourism (DOT), to showcase iconic international music artists and the hottest new acts in both the regional and local music scenes on a single stage, while featuring the best of Philippine music and culture to international youth audiences. 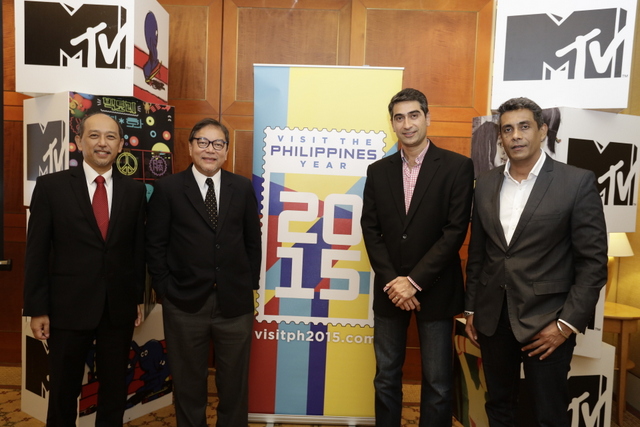 The collaboration will see the launch of MTV Music Evolution in the second quarter of 2015, as the concert brings to life the evolution of a music genre and enables young people to experience and discover how music styles and sounds have evolved over the years. Recorded live for global telecast, the first edition of MTV Music Evolution will hit the shores of Manila through international hip hop in 2015.

“We are thrilled to be collaborating with the Tourism Promotions Board of the Philippine Department of Tourism for what promises to be the biggest concert party on a single stage in Manila next year! Not only does MTV produce the most talked about live performances and events, but we also have a successful history of partnering with Tourism Boards around the world to create compelling and engaging youth experiences. We hope to provide a platform for youth to continue to celebrate and discover music, while celebrating all that the Philippines has to present to the world,” said Vishal Kurien, Vice President for Advertising Sales, Southeast Asia, Viacom International Media Networks.

“We Filipinos like to entertain and perform for people. MTV Music Evolution will not only put the Philippines on the map of international music, but it will also serve as a global stage for the world to witness what Filipinos do best. The Philippines is a musically passionate country. And through our partnership with MTV, young people  from around the world will now have the opportunity to share in this passion and experience why and how the music culture is even more fun in the Philippines. This is, indeed, one of the exciting events to look forward to during our Visit the Philippines Year (VPY) 2015,” Secretary Ramon R. Jimenez, Jr. of the Philippine Department of Tourism said.

In addition to the MTV Music Evolution, MTV will also help promote local music events organized by the TPB to profile the rich music heritage of the country. MTV Music Evolution will be supported by a wide range of integrated marketing initiatives driving awareness and engagement for the event. Marketing activities with media campaigns across key targeted markets will include consumer promotions, a dedicated microsite, and supporting social media and press campaigns.

Further details of the MTV Music Evolution, including the artist line-up, will be announced in the run up to the event.

About MTV
MTV is the world’s premier youth entertainment brand. With a global reach of more than a half-billion households, MTV is the cultural home of the millennial generation, music fans and artists, and a pioneer in creating innovative programming for young people. MTV reflects and creates pop culture with its award-winning content built around compelling storytelling, music discovery and activism across TV, online, and mobile. Outside of the United States, MTV is part of Viacom International Media Networks, a division of Viacom Inc. (NASDAQ: VIAB, VIA), one of the world’s leading creators of programming and content across all media platforms.For more information about MTV in Southeast Asia, visit www.mtvasia.com.

About Viacom International Media Networks
Viacom International Media Networks (VIMN), a unit of Viacom Inc. (NASDAQ: VIA, VIAB), is comprised of many of the world’s most popular multimedia entertainment brands, including MTV, MTV LIVE HD, Nickelodeon, Nick Jr., Comedy Central, Paramount Channel, and more. Viacom brands are seen globally in nearly 700 million households in approximately 170 territories and 37 languages via more than 200 locally programmed and operated TV channels and more than 550 digital media and mobile TV properties. Keep up with VIMN news by visiting the VIMN PR Twitter feed at www.twitter.com/VIMN_PR. For more information about Viacom and its businesses, visit www.viacom.com, the Viacom blog at blog.viacom.com and Twitter feed at www.twitter.com/Viacom.