An Evening with Brian McKnight will be staged at the Mandarin Oriental Hotel, Kuala Lumpur on 9 April 2017 at 8.30pm. The evening’s theme takes its name after McKnight’s latest DVD featuring a live concert experience that was held in Los Angeles and launched in September last year.

The compilation includes Brian’s greatest hits and features three of his latest hits including his current single ‘Everything’.

The live performance in Kuala Lumpur is brought to you by LADS Entertainment and LADS Inc. of the United States, known for its reputation in organising major international shows. 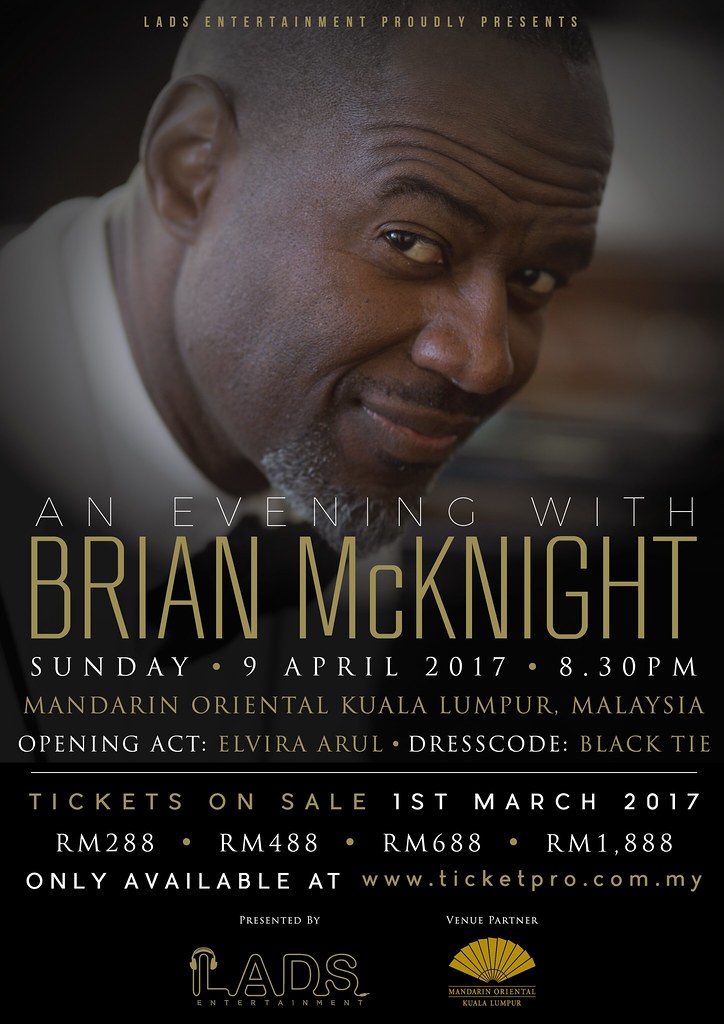 Its Executive Director, Helmi Dato Ilyas said “We are delighted to present a renowned artist like Mcknight back in Kuala Lumpur, whose repertoire and string of hit songs in the international music scene speaks for itself. His songs were practically love anthems for many across the globe, particularly his hit single Back at One back in the 90s”.

He added that this is the start of many more world standard concerts to be held in South East Asia including Malaysia, thus not only creating opportunities for Malaysians and its regional neighbours to anticipate state-of-the art entertainment, but generating a stream of revenue for the country.

The black tie event will be an evening of top notch live performance, with soulful Malaysian singer, Elvira Arul performing the opening act. Arul whom landed a role of a lifetime with Eff White in the Asian Production of ‘Dreamgirls’ and worked alongside international producer-composer extraordinaire, David Foster, American Idol winner Ruben Studdard and Grammy winner Eric Benet.

McKnight whose singing career began in his church choir, signed on his first recording label at the age of 19 and by 1992, his self-titled album ‘Brian McKnight’ was released. This was followed by the album ‘I Remember You ‘in 1995.

In 1997 his album titled ‘Anytime’ sold over two million copies and was nominated for a Grammy. The success of ‘Anytime’ followed suit in 1999 with the album ‘Back at One’ soaring in sales of over three million copies; his most successful to date. His musical career has earned himself 16 Grammy nominations.

LADS Entertainment stated that ticket sales have been very encouraging, especially in these final two weeks approaching the event, as the R&B artist has a relatively large fan base here in Malaysia.

Tickets for the show are priced with attractive offers.