Erykah Badu Live in Kuala Lumpur 2012 concert will now take place on Feb 29 instead of the earlier announced date on Feb 28.

In a press statement from event promoter Pineapple Concerts Sdn Bhd, its managing director says that the change is to accommodate “her extended stay here in Malaysia and any inconvenience caused by this change is highly regretted.”

He assures concert-goers that all other aspects of the concert are running smoothly. The award-winning singer will be arriving in Kuala Lumpur on Feb 26 for a series of media activities. 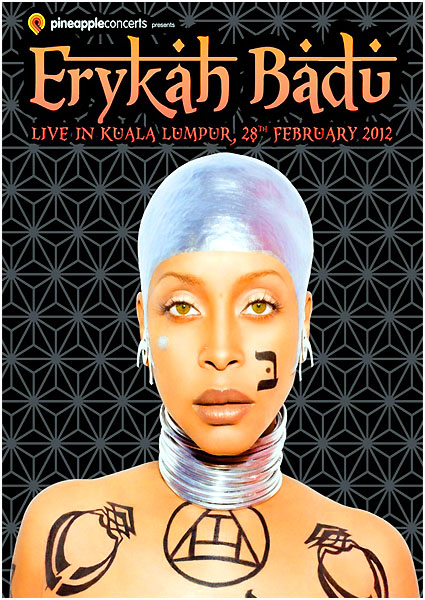 KL will be Badu’s first stop in Asia as part of her first Australasian tour. With a career spanning R&B, hip hop and jazz, Badu is barely comparable, in the best possible way. Forging her own path in soul music since her 1997 debut album Baduizm, she is famed for live shows that incite rapturous engagement.

Erykah Badu’s music is known to be soulful and jazzy, with soft, mellow beats. With an incredible career spanning R&B, Hip-Hop and Jazz, she is barely comparable, in the best possible way. Forging her own path in soul music since her 1997 debut album “Baduizm”, Erykah Badu is famed for live shows that incite rapturous engagement and lifelong allegiance. What further set her apart washer unique personality and beliefs, which shone through in every aspect of her being – from style to song writing. Erykah Badu is a true individual and has never been afraid to express herself which make her an undoubtedly an icon in her own right.

For the first time in history, the Queen of Neo-Soul, Erykah Badu will be making her way to Malaysia for performance that you leave you in awe! Her incredible career has spanned across R&B, jazz and Hip Hop which started with her debut album, ‘Baduizm’ in 1997. Famed for her live performances, she will wrap you in emotions and forge a lifelong allegiance. Don’t miss out!