In conjunction with Hard Rock Kuala Lumpur’s 15th anniversary of its breast cancer awareness campaign, Pinktober®, it will host a special Charity Showcase featuring, Dina Nadzir and Nita Hamzah of Malaysian Idol fame on 19 October 2014. Hard Rock Cafe Kuala Lumpur will donate proceeds from the showcase and sale of its limited-edition 2015 Pinktober® merchandises to the National Cancer Society of Malaysia.

“Breast cancer is the number one cause of death of women in Malaysia and Pinktober® is dedicated to raising funds through the showcases and sales of various merchandises like T-shirts and pins to raise awareness and support research into the disease. This is an ongoing campaign by Hard Rock worldwide and proceeds from this showcase and sales of merchandises in Malaysia will be given to charity,” said Nor Esah Abdul Ghani, Marketing Manager of Hard Rock Cafe Kuala Lumpur.

Dina Nadzir was the first runner–up in Season One and Nita Hamzah was the first runner–up in Season Two of Malaysian Idol. They have since gone on to establishing themselves in the entertainment industry making them household names. Tickets for the Pinktober® showcase are priced at RM60 per person inclusive of a drink. The showcase will be produced by Mike Manicka and backed by 6 musicians, Sparrow King. It’s a 90 minutes live showcase. 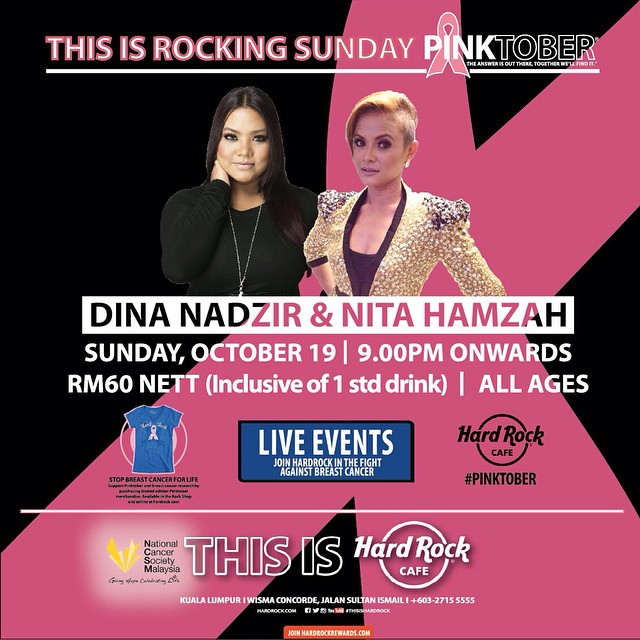 Malaysian fans are invited to visit Hard Rock Cafe Kuala Lumpur and rock out for the cause at the showcase. Since its inception, Hard Rock Cafe’s Pinktober® campaign has raised millions of dollars worldwide for breast cancer awareness and research, mobilising the rock and roll community and its patrons from around the world to join the fight against breast cancer through creative and exciting partnerships, events, merchandise and music. The 2014 Limited Edition Pinktober® Pin for instance, has a butterfly symbolising rebirth, evolution, and beauty, which is what Pinktober® is all about.

Since its establishment in 1971, Hard Rock has been committed to a wide variety of philanthropic causes and activities around the world, and Hard Rock Cafe Kuala Lumpur carries this commitment to its market. In every Hard Rock city, the staff makes it a priority to become a valuable community partner.

In the form of funds, food and beverage, merchandise and man hours, Hard Rock Cafe Kuala Lumpur will give back locally, as well as participate in global corporate philanthropic initiatives ranging from breast cancer awareness programmes to rock icons’ favourite causes, through the annual Signature Series T-shirt programme.